For the first time in its 50-year history, San Diego Comic-Con is going completely virtual due to the Coronavirus pandemic, with [email protected] officially kicking off on Thursday, July 23. So no, you won’t get to be in the same room as your favorite movie and TV stars, but you will be able to avoid long lines and have access to free panels all from the comfort of your own couch.

“Although conditions prevent celebrating in person, the show, as they say, must go on,” spokesperson David Glanzer said in a June statement after the organizers announced their decision to make 2020’s SDCC a virtual event. “With [email protected], SDCC hopes to deliver the best of the Comic-Con experience and a sense of its community to anyone with an internet connection and an interest in all aspects of pop culture.”

And the stars are still coming out for one of the indusyt’s biggest weekends of the year, with the casts of hit shows like The Walking Dead, Family Guy and more taking part in panels. Plus, Charlize Theron is getting her own badass moment at the Con, while Nathan Fillion, Kevin Smith and more are hosting conversations with their fans.

In addition to still hosting tons of panels—more than 350, to be exact—for some of Hollywood’s biggest movies, shows, comic books and more on the official YouTube channel, SDCC is still holding its annual Masquerade Costume Competition, but just making it virtual.

With entries now closed, the Masquerade is set to go live on Tumblr for your viewing pleasure on Friday, July 24, and will remain available online for at least a few months. But the winners in all categories will be announced online on Saturday, July 25. May the odds be ever in your favor!

And if your Con experience just doesn’t feel quite right without a badge, the organizers are offering you the chance to print yours out and proudly display it to your pet, should they ask to see your credentials.

Plus, there are challenges like sidewalk art and cosplay and more for you to compete in from home throughout the five-day event.

While you won’t be able to walk the famed exhibit hall in-person this year, Comic-Con is still hosting it virtually, keeping “the floor” open to peruse all weekend. You can find a list of exhibitors on the official website.

Of course, as any SDCC veteran knows, your weekend ultimately comes down to scheduling.

The bad news, however? Like the in-person Con, there are panels going on at the same time, meaning you might have to make some tough choices when it comes to choosing Zooms.

But the good news is E! is here to help, delivering everything you need to know about [email protected] ahead of its kick-off.

Star Trek Universe: Live long and prosper at your first virtual Con with the casts and producers from Star Trek: Discovery, animated series Star Trek: Lower Decks and Star Trek: Picard as they come together for this epic virtual panel to celebrate and dish on all things Star Trek. And legend Patrick Stewart and the Picard cast will speak for the first time about their shocking finale. (Stream here at 1 p.m. ET)

Truth Seekers: They’re (still) coming to get you, Barbara! Shaun of the Dead and Hot Fuzz co-stars Simon Pegg and Nick Frost are reuniting on-screen for this new Amazon Prime Video series about UK paranormal investigators, and they’ll provide a first look during this panel. (Stream here at 3 p.m. ET)

His Dark Materials: The Zoom where it will happen: Lin-Manuel Miranda‘s Comic-Con appearance! The Hamilton star will join his co-star Ruth Wilson and others for an in-depth Q&A about their HBO/BBC drama. (Stream here at 4 p.m. ET)

Upload: The Office‘s Greg Daniels will join the cast of his Amazon Prime series, including Robbie Amell, to discuss season one and tease season two. (Stream here at 5 p.m. ET)

Superstore: Attention virtual Con-goers: Ben Feldman, Mark McKinney, Lauren Ash, Colton Dunn, Nico Santos, Nichole Sakura and Kaliko Kauahi and the bosses behind the beloved NBC sitcom will tease what cans can expect from the series’ return, along with dishing out a few surprises during their panel. (Stream here at 6 p.m. ET)

Van Helsing: Turn the lights on and tune in for this panel discussion about what’s ahead for the Syfy series, with stars Kelly Overton, Tricia Helfer, Jonathan Scarfe and more joining in. (Stream here at 8 p.m. ET)

The New Mutants: The next generation of mutants, including Game of Thrones star Maisie Williams, Anya Taylor-Joy, Stranger Things‘ Charlie Heaton, Alice Braga, Blu Hunt and Henry Zaga, will come together to discuss their long-awaited movie in a convo moderated by Ira Madison III. (Stream here at 5 p.m. ET)

Robert Kirkman @ Home: Join The Walking Dead creator in his home as he teases whats ahead. (Stream here at 7 p.m. ET)

Archer: Get all the details on season 11 of the FXX animated hit straight from the cast, including Aisha Tyler, Chris Parnell, Judy Greer, Amber Nash and Lucky Yates. (Stream here at 8 p.m. ET)

Pandora: The cast and creatives behind the CW sci-fi drama help close out Friday night at Comic-Con for the TV side of things with a discussion about what to expect in season two. (Stream here at 8 p.m. ET)

Charlize Theron: Evolution of a Badass – An Action Hero Career Retrospective: Wait, you mean we get to spend a whole hour just recognizing this badass the star of Æon Flux, The Old Guard, Mad Max: Fury Road and Atomic Blonde is AND get insight straight from the Oscar winner on her impressive career? We’re not worthy! (Stream here at 1 p.m. ET)

A Zoom With Joss Whedon: The Avengers director and the creator of Buffy the Vampire Slayer makes his annual voyage to the Con for a Q&A with fans. (Set to stream at 8 p.m. ET)

The Simpsons: America’s most famous animated family will get together on Zoom to tease season 32. (Stream here at 2 p.m. ET)

Bless the Harts: If any panel will turn into a party, it’s this one featuring stars Kristen Wiig, Maya Rudolph, Ike Barinholtz, Jillian Bell and Fortune Feimster as they dish about season two of their animated hit. Boxed wine likely will be involved. (Stream here at 3 p.m. ET)

American Dad!: Fans of the Fox animated comedy will get a chance to learn how to sketch their favorite characters in a lesson from supervising director Brent Woods, with appearances by the cast as well. (Stream here at 4 p.m. ET)

Family Guy: Want a sneak peek at the animated hit’s 19th season? Of course you do! You can expect that and more from this virtual table read featuring Seth MacFarlane, Alex Borstein, Mila Kunis and Seth Green, as well as executive producers Rich Appel, Alec Sulkin, and Kara Vallow. (Stream here at 5 p.m. ET)

For All Mankind: Joel Kinnaman, Michael Dorman, Sarah Jones, Shantel VanSanten and more of the AppleTV+ drama’s stars will look back on season one with executive producers, including Ronald D. Moore. Plus, fans will get an exclusive first look at season two. (Stream here a 5 p.m. ET)

The Order: Get all the scoop on the upcoming second season of Netflix’s sci-fi sleeper hit straight from the stars. (Stream here at 6 p.m. ET)

Stumptown: Comic-Con vets Cobie Smulders, Jake Johnson and Michael Ealy will be on the panel to dish all about the ABC hit’s sophomore season. (Stream here at 7 p.m. ET)

What We Do in the Shadows: FX’s hit dark comedy’s panel will feature stars Matt Berry, Natasia Demetriou, Kayvan Novak, Mark Proksch, and Harvey Guillén and be moderated by Haley Joel Osment. He really does see dead people! (Stream here at 8 p.m. ET)

Constantine: 15th Anniversary Reunion: Keanu Reeves will reunite with director Francis Lawrence and producer Akiva Goldsman to look back on the making of their adaptation of the DC Comic character. (Stream here at 3 p.m. ET)

An Evening With Kevin Smith: Join the acclaimed director and perennial Con favorite for a night of conversation, including a chat with his daughter Harley Quinn Smith about their new podcast. (Stream here at 9 p.m. ET)

A Conversation With Nathan Fillion: The beloved star of Castle and Firefly will welcome special guests, including Joss Whedon, Alan Tudyk, Gina Torres, Molly Quinn and more during his in-depth convo led by Alexi Hawley, the showrunner of The Rookie. (Stream here at 5 p.m. ET)

Keep checking back with E! all weekend as we bring you the breaking news and biggest moments from [email protected]

Wed Jul 22 , 2020
An oh-so-tiny new look at The Eternals has arrived, courtesy of a behind-the-scenes photo posted online by Gilgamesh actor Don Lee. Lee took to Instagram to share some things from the set of Chloe Zhao’s Marvel Phase 4 movie, including a welcome letter from Marvel Studios, a swanky trailer and […] 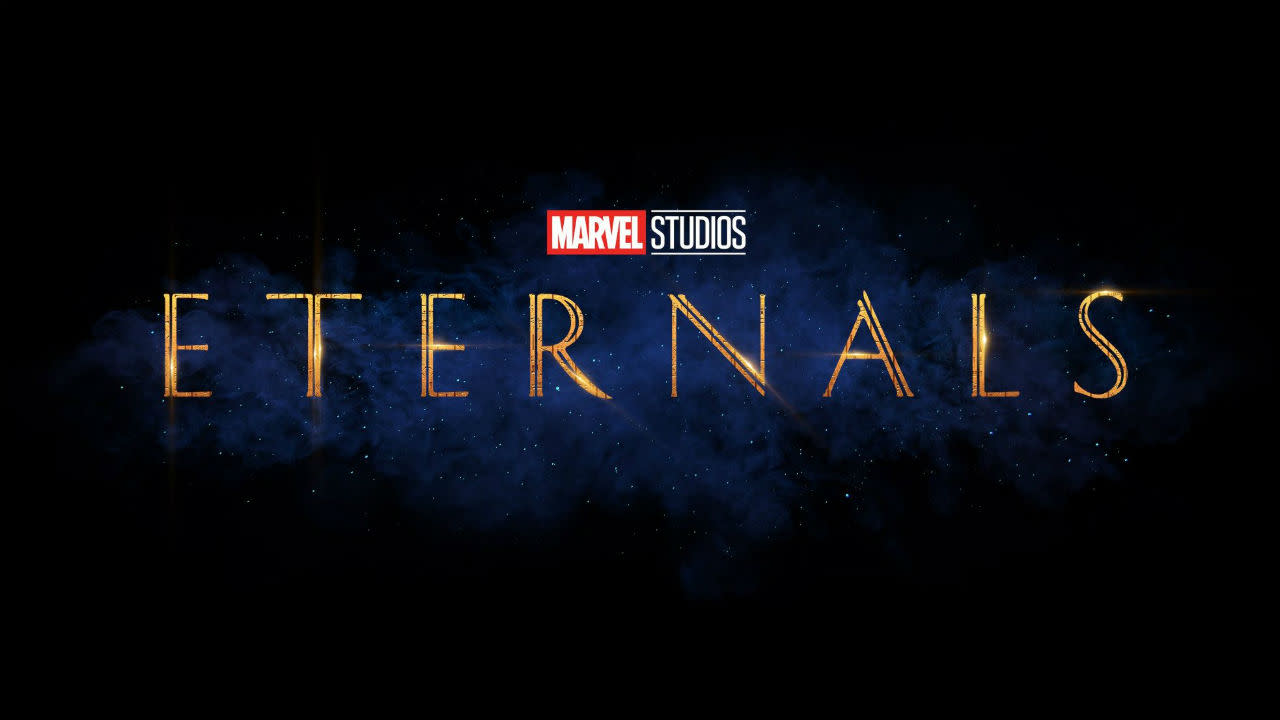