It is tempting to conceive of Chinese media firms as the local equivalent of a familiar Western brand. That mindset imagines Weibo as the Chinese Twitter, iQIYI as the Chinese Netflix, and WeChat as a Middle Kingdom version of WhatsApp.

The reality is usually more complicated. Largely walled off from international competition, many Chinese media-tech firms have grown by being hybrids, with games firms spilling over into live-streaming, and e-commerce firms justifying excursions into streaming video.

Tencent-owned WeChat’s success as a “Super App,” delivering everything from messaging to photo sharing, via corporate communications and cashless payments, has become a role model for many Asian unicorns – and probably the envy of Facebook too.

To think of its NYSE-listed subsidiary Tencent Music Entertainment (TME) as simply the Chinese counterpart of international music streaming leader Spotify is to understand only part of the company.

That perspective may also underestimate Tencent’s long term ambition for TME. And it makes Tencent and TME’s recent purchases of equity stakes in Western music majors Universal Music and Warner Music look inconsistent with TME’s business focus, which for the moment is largely China-centric.

Tencent and TME paid $3.3 billion EUR3 billion for a 10% stake in Universal Music in January. And this month TME spent $200 million for a 1.6% slice of Warner Music Group (by owning 10.4% of WMG’s outstanding ‘A’ Shares) right after WMG’s IPO.

Tencent, whose shares reached an all-time high last week, anchoring it firmly among the world’s ten most valuable corporations, certainly has the financial firepower. It also has brainpower and plenty of deal-making experience – according to Mergermarket publication, Tencent has spent $62 billion on acquisitions since 2012, while the Crunchbase M&A tracker says that over 150 of those were overseas deals.

“The top management at Tencent group level are all super smart. They are never just looking at the next move. They are always looking 2 or 3 moves over the horizon,” one executive outside Tencent, but who has had business dealings with the group, told Variety. “The endgame for Tencent, of course, is a merger with Spotify, and to take on Apple.”

TME has three separate platforms, QQ Music, Kugou and Kuwu, which give it a combined 42.7 million paying subscribers, making it the largest music streamer in China. Impressive as that might sound, only 10% of TME’s content is behind a paywall, and music streaming accounts for less than 30% of its business.

The larger part, accounting for 68% of TME revenues, is “social entertainment” mostly supplying karaoke (WeSing) and live music services. TME makes its money in that sector from advertisements and from a cut of the gifts and non-recurring payments that users make to artists.

TME also has operations re-licensing music to competing streamers, a talent development division, and collection of smaller activities, such as live streaming of games play, music videos and TV content.

“TME is a social network, not just a platform-based digitizer of professional content,” CEO Cussion Pang said last month on a conference call with financial analysts. Pang wants TME’s 657 million monthly users to create and share their own music, videos and live streams.

The pressing need to spend $3.5 billion buying shares in UMG and WMG seems even more remote when it becomes clear that local bands are more important than Western music acts. “There’s a lot of focus on the three majors, but the biggest five labels account for only less than 30% of our streaming volume on our platform,” says Pang.

The corporate explanation for the deals is boilerplate stuff. “TME intends to further deepen the cooperation with UMG and drive the development of music entertainment market in China. This investment was very well aligned with Tencent Music’s mission to use technology to elevate the role of music in people’s lives by enabling them to create, enjoy, share and interact with music,” a TME spokesman told Variety in an emailed statement.

Market control however may be another key consideration.

“Tencent has a history of vertical integration in other business segments,” says the outside executive. “Dominating distribution allows it to promote its own labels and increase prices, and therefore to increase the valuation of its own labels.” The ubiquity of WeChat in China means that one of TME’s platforms is only ever a couple of clicks away for a billion consumers, whether they are on a messaging, news or an online book site.

TME, which was born from Tencent’s own QQ Music, and a 2016 merger with China Music Corporation, which in turn had stakes in both Kuwu and Kugou, has frequently been accused of dominating China’s music market.

This assertion has been especially loud in the relicensing of music to other platforms such as NetEase’s Cloud Music, Alibaba’s Xiami Music and China Mobile’s Migu.

They argued that having overpaid to win the exclusive licenses from Universal, Warner and Sony, TME then passed on those excessive costs when it re-licensed the content to other Chinese music streamers. And TME lumbered them with tricky usage terms.

In August last year, it emerged that China’s State Administration for Market Regulation had opened a probe (probably as early as January 2019) into TME’s practises. It called in companies including Apple, Alibaba, Baidu, NetEase and Huawei to testify.

In mid-year the regulators ordered all Chinese music streamers to share 99% of their content with each other through sub-licenses. TME even agreed to begin licensing to perceived threats Xiami and Bytedance, operator of TikTok and Douyin. The probe was abandoned in January 2020 without any publication of its findings.

With that episode behind it, Tencent may have felt it had the green light to re-start its music acquisitions. But even if it felt endorsed as China’s national champion, building a monopoly may not be what TME had in mind.

TME is currently in negotiations to renew its content supply deal with Sony’s BMG. Instead of an exclusive master license, this time it is seeking a non-exclusive arrangement, specifically one that cuts TME’s fixed minimum guarantee payment and increases the revenue sharing component, TME’s chief strategy officer Tony Yip explains. (Sony and Warner Music jointly own a 4% of stake in TME.) But even a watered-down, non-exclusive license may serve TME’s purpose.

That’s because TME remains the biggest fish in the Chinese pond, and the partner of choice.

Chinese regulations mean that Western media companies cannot sell directly to Chinese consumers. At every turn, they need a partner. To operate within Chinese borders, a streaming company like Spotify or Apple Music would have to locate servers in the country, actively comply with censorship (live streaming is a particularly sensitive area), and explicitly share its data with the government. Those are all conditions that are unacceptable to most Western tech companies.

Instead, reciprocal share ownership arrangements allows these Western companies to earn something from China’s closed-off, but fast-growing market. And in return Tencent gets to own chunks of some of the leading companies in the developed world markets it has not yet reached out to.

When TME and its big daddy are ready to gobble up Spotify, U.S. authorities will have relatively little leverage to oppose their merger. Neither TME or Spotify is U.S.-owned, and the Western music giants would be unlikely to stand in the way of their two biggest licensees. Besides, in Apple, the U.S. has its own national champion that will be difficult to dislodge.

Mon Jun 29 , 2020
Mark Zuckerberg, Facebook’s CEO and chairman. Reuters Civil rights organizations including NAACP, Color of Change, and Anti-Defamation League asked advertisers to stop paying for advertisements on Facebook in the wake of George Floyd’s death at the hands of Minneapolis police officers. Since Floyd’s death, Facebook has allowed posts in which Trump […] 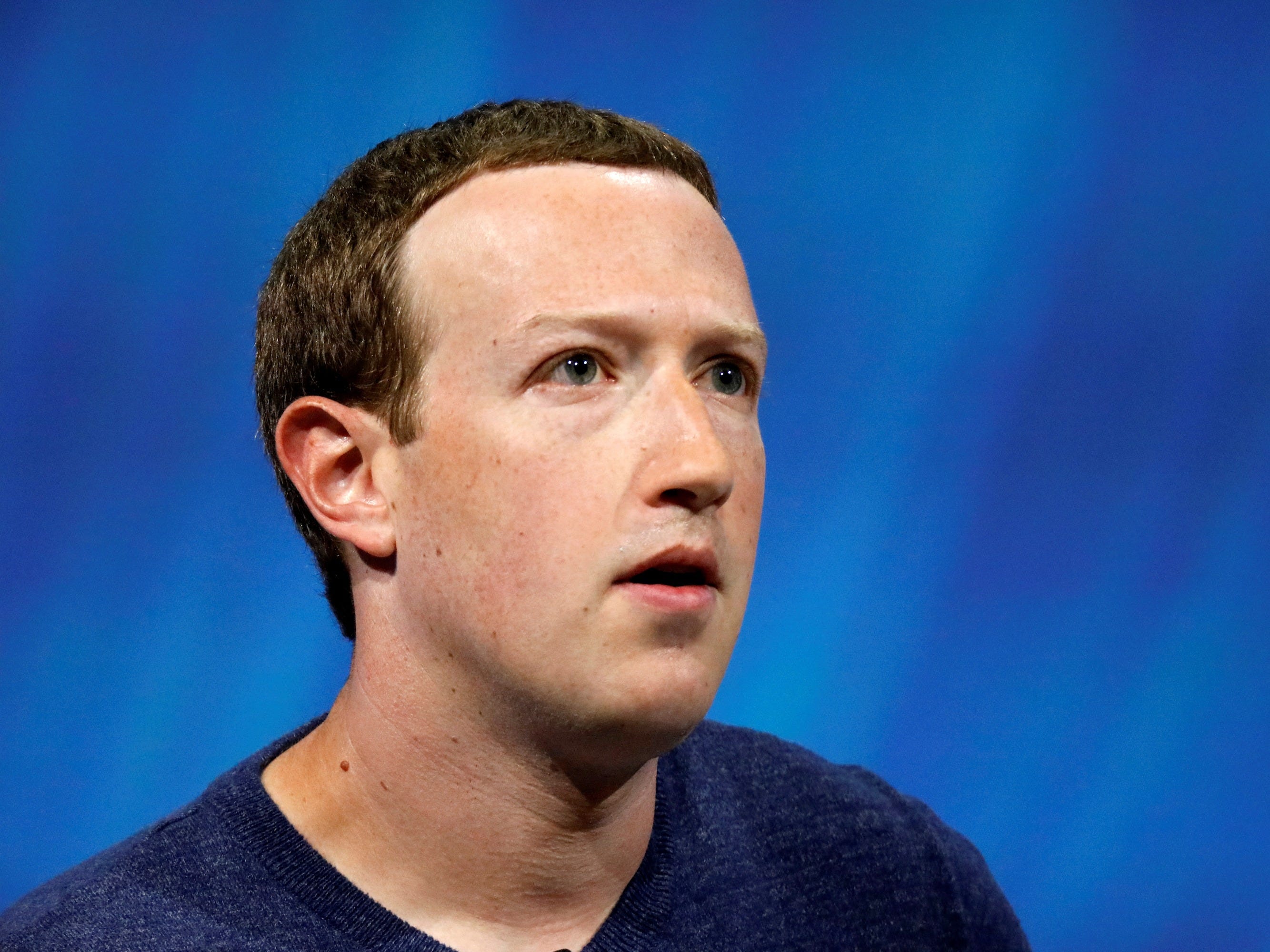