UK adults spent a quarter of their waking day online during lockdown – a record high, according to Ofcom.

During April, adults spent an average of four hours a day online, up from three-and-a-half in September 2019, the communications watchdog said.

And seven in 10 people made video calls at least once a week during lockdown, with millions turning to Zoom for the first time.

Twitch, the livestreaming platform for gamers, saw visitors increase from 2.3 million in January to 4.2 million in April.

TikTok, which allows users to create and share short videos, reached 12.9 million UK visitors in April, up from 5.4 million in January.

Much of Ofcom’s report focused on people’s online habits in September 2019, before the coronavirus struck.

At that point, nine in 10 adults and almost all children spent time on platforms such as TikTok, YouTube, Snapchat and Instagram, according to the study.

And nearly half of adults watch videos on such platforms several times a day, rising to 73% for children aged eight to 15.

People are no longer just passive consumers, with two in five adults uploading videos to TikTok, YouTube, Snapchat or Instagram.

Video conferencing app Zoom has proved the big hit of lockdown – up from 659,000 users in January to 13 million in April as the nation turned to it to chat to family and friends, and take part in quizzes and games.

The app has not been without controversy, with questions about how secure it was, with some people falling victim to zoom-bombing, where an uninvited guest joins a call to cause mischief or share unpleasant or hateful material.

Even before the pandemic, people were moving away from landline calls and text messages in favour of WhatsApp and Facebook Messenger, the report indicates.

Lockdown seems to have accelerated the adoption of such services. Nearly half of UK adults used WhatsApp to make video calls at least weekly, with Facebook Messenger not far behind on 41% and Apple’s FaceTime being used by 30%.

Ofcom’s director of strategy and research Yih-Choung Teh said: “Lockdown may leave a lasting digital legacy. Coronavirus has radically changed the way we live, work and communicate online, with millions of people using online video services for the first time.”

People remain wary about online safety though, with 87% of adults saying that they had concerns over children using video-sharing websites and other apps.

Wed Jun 24 , 2020
Photograph: Daisy-Daisy/Alamy Stock Photo/Alamy Stock Photo Online harassment is becoming more common and more severe, a new survey has found, especially for members of minority groups. Some 35% of Americans have experienced harassment online this year due to racial, religious, or sexual identity – an increase of 3% from 2018, […] 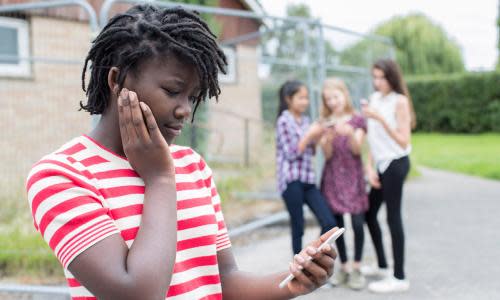