WASHINGTON (Reuters) – The Senate Judiciary Committee unanimously voted to approve a bill aimed at ending the spread of online child sexual abuse material after attempting to address concerns from U.S. tech companies that the proposed law goes too far to weaken privacy protections for ordinary users.

Tech companies such as Facebook and Alphabet’s Google feared The Eliminating Abuse and Rampant Neglect of Interactive Technologies Act of 2019, or EARN IT Act, would hurt their ability to offer protections like end-to-end encryption, a technology critical to the privacy of internet users .

On Wednesday, Committee Chairman and lead sponsor Senator Lindsey Graham proposed an amendment in an effort to assuage concerns from the industry, which continued to oppose the bill.

“I’m not trying to stop companies from encrypting their products. … I’m trying to make them harden their products against sexual exploitation,” Graham said at the hearing on Thursday.

The sentiment was echoed by Democratic Senator Richard Blumenthal, the other lead sponsor. “This bill is not about encryption, and it never will be,” he said.

The bill amended a previous requirement that would allow a commission with members such as Attorney General Bill Barr to set best practices that were legally binding – a point of contention over many months for big tech companies. It was feared that Barr, who opposes end-to-end encryption because of how the technology hinders federal investigations, would set standards to weaken the technology.

The amended version of the bill now allows federal and state claims against internet companies if they host such content. It threatens to strip away tech companies’ protections under Section 230 – a federal law protecting them from liability over content posted by users – if the companies do not stop the spread of child sexual abuse material.

Republican Senator Mike Lee voted in favor of the bill on Thursday but reserved his right to negotiate and fine-tune some of its provisions before the bill is taken up by the Republican-led Senate for a vote.

“The broad language of this bill allows each state to define the standards of liability. … We can’t base a federal protection on a patchwork quilt of state laws,” Lee said.

(Reporting by Nandita Bose in Washington; editing by Jonathan Oatis)

Tiny desert town devastated by wildfire as it battles the coronavirus

Thu Jul 2 , 2020
Ana Valenzuela stares at the pile of ashes and debris where her home in Niland, Calif., once stood. (Eduardo Contreras / San Diego Union-Tribune) For Genesis Palta, the pandemic had already meant a chain-reaction of adjustments. The stay-at-home orders forced her mother to stop selling Mexican desserts to her neighbors, […] 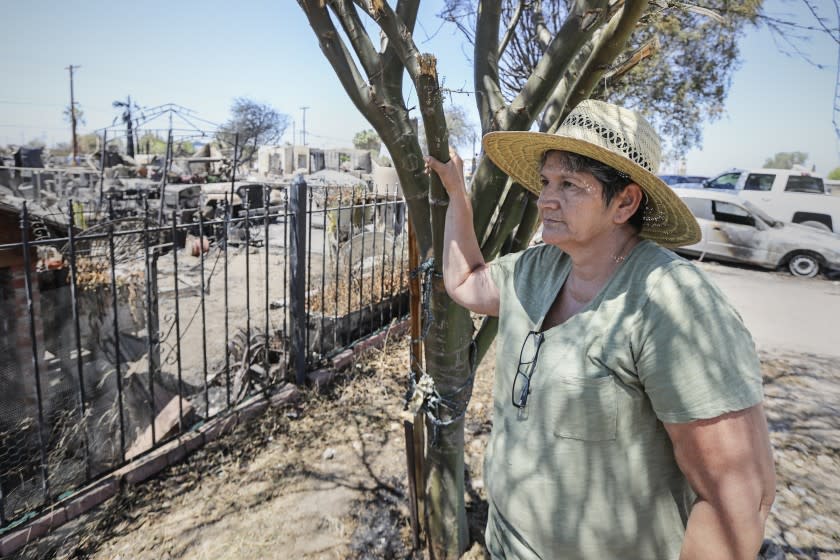