By Alexandra Alper and Susan Heavey

WASHINGTON (Reuters) – President Donald Trump is pushing for schools to reopen in the fall and is hosting White House events on the topic on Tuesday, despite a steady increase in coronavirus infections across the country led by younger Americans and rising hospitalizations in many states.

Trump, a Republican seeking re-election in November, on Monday tweeted “SCHOOLS MUST OPEN IN THE FALL!!!”, as local officials across the country began pausing or scaling back their reopenings due to the surge in infections.

On Tuesday, he will hold a discussion at the White House on re-opening schools, while Vice President Mike Pence speaks with governors on the topic, according to a senior administration official who briefed reporters.

“It is really … critically important to get our schools open,” the official said, highlighting the role schools play in communities. “There are a variety of different strategies that schools can adopt that really minimize the risk and can open these schools quite safely.”

The call comes as state and local governments, which largely control schools for kindergarten through 12th grade, grapple with how to handle the upcoming school year, seeking to balance the need for education with the risk of spreading the highly contagious disease.

Educators say socialization and other benefits such as school food programs are critically important. Experts have also shown online learning exacerbates the divide between poorer and more wealthy Americans, who have greater access to technology.

Most working parents of school-age children also depend on in-person instruction to allow them to work.

But an alarming surge in cases in the United States, especially among younger people, has raised concerns about the increased risk of spread by children to vulnerable adults at home as well as to older teachers and school staff.

The U.S. Centers for Disease Control and Prevention “encourages school districts to make reopening plans that anticipate COVID-19 cases, minimize risk of spread and then limit the need for the potential of school closures,” the official said.

Florida, a Republican-led state, on Monday issued a sweeping executive order for children to return to school this fall, despite sharply rising new COVID-19 cases and hospitalizations there.

Asked about Florida, the senior administration official stressed that “these are state and local decisions at the end of the day and we are confident that state and local leaders across the country are taking these decisions very seriously.”

Michigan Governor Gretchen Whitmer, a Democrat, said it was too soon to decide on schools given the nature of the resurgent outbreak.

If Trump wants schools to re-open, he should call for masks to be worn nationwide, she told CNN, calling mask wearing “a simple, cost effective” solution to mitigate virus spread.

Colleges and universities are also weighing plans to resume this autumn, including calendar changes on online classes.

The Trump administration on Monday said foreign students must leave the country if their schools move to fully online classes, which could choke off revenue for those schools.

Tue Jul 7 , 2020
TAMPA, FL — The Hillsborough County superintendent of schools has announced that students and staff returning to public schools on Aug. 10 will be required to wear face masks. After meeting with health officials, business leaders, teachers and school administrators, Superintendent Addison Davis said he believes masks are the best […] 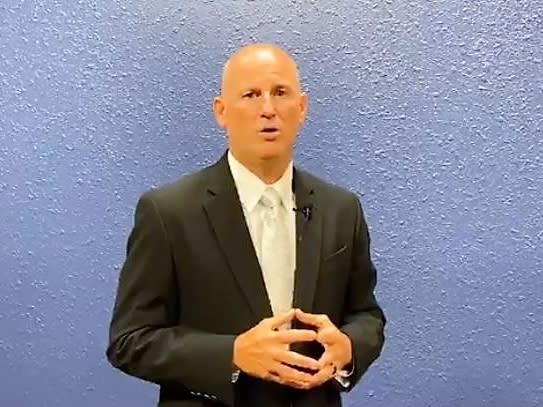