MADRID (Reuters) – Out of 31 pupils in one of Madrid teacher Clara Mijares’ online classes last month, eight were missing. Two had not been seen for some time, she said, adding that this is a fairly typical ratio these days for her lockdown sessions for 12 to 16-year-olds.

Some of those who had made it to that pastoral meeting of El Espinillo secondary school in Madrid kept their webcams disabled. They were in no rush to answer when she asked how they were doing.

“The charm of being in a class has been lost,” Mijares said.

In recent months it’s a scene played out in homes worldwide, as United Nations data suggests over 1.5 billion children were affected by school closures to curb the spread of COVID-19. From Shanghai to California, students have been kept out of classrooms, and attendance at online sessions has thinned.

But as the school year comes to an end and countries count the cost of the lost learning, Spanish government data points to a particularly damaging consequence of the isolation caused by the pandemic: The disenfranchisement of ever more young people, particularly those on low incomes, such as the children of those who are caring for the vulnerable.

Spain has had more than 260,000 cases of COVID-19 according to a Reuters tally – the second-highest total in Europe after the United Kingdom. But unlike other countries including Britain, in Spain all schools closed during lockdown. There was no skeleton service for children of key personnel like health workers.

Since March, all educational centres including primary, secondary and universities have been closed, leaving 9.5 million students learning from home. Most schools will not open for all pupils until the new academic year starts in September.

In Spain, school drop-out rates were already the highest in the European Union – 17.3% in 2019. Now, the government estimates up to 12% of school children have dropped out of distance-learning during the 14-week lockdown – nearly one million pupils.

Mijares’ school serves a working-class district – pupils range from white-collar households to families on state aid, says headmistress Toni Garcia. As the lockdown dragged on, Mijares realised she would have to find different ways to reach students, including making landline calls to them.

“I spoke to families who said they were overwhelmed by all the assignments and all the emails,” she said, sitting in her brother’s old bedroom which she has converted into her office since moving back in with her parents during lockdown.

“One of my tasks has been to call and explain how to read and send an email from a mobile phone.”

Spain’s low-income learners are already faring worse than many in Europe. The financial crisis of 2008-2014 laid off over 2 million workers and even today, despite years of strong economic growth, the country has the EU’s second-highest unemployment rate after Greece. There are 2.2 million children at risk of poverty and exclusion in Spain – over a quarter of the total child population, according to calculations by humanitarian group Save the Children.

The income difference between the richest fifth of Spain’s population and the poorest – a measure of inequality – is among the highest in Europe and has grown over the last decade, according to the European Anti-Poverty Network. The widening gulf poses crucial questions for economic growth and social stability.

“The role the school should normally play – as a force for social mobility and a way to equalise chances in life – is much more difficult to play if you close down the school,” he said. Continued disruption may increase the gap, he said.

The government said physical presence in classrooms will be the general standard when schools reopen. It is keen for all children to be able to return to the classroom because of the role schools play in eliminating inequality, said education ministry spokeswoman Mar Hedo.

“EVERYTHING IS WEIGHING ON ME”

The school closures have left many struggling. Single mother Saida Juarez, 50, works as a care home assistant in Vallecas, a suburb of Madrid. When the pandemic struck, she isolated herself from her two sons within her flat to cut the risk of infecting them.

The children have work sent to them by email which they receive by mobile phone. When they’ve finished, they take photos which they send back for marking. Juarez has not been able to help them with their schoolwork.

“I couldn’t go near them,” she said, speaking in the living room of her flat.

Her eldest son Gabriel, who attends a different school than the one Mijares teaches at, enters his final year of compulsory education next year and hopes eventually to join the police. Since lockdown he has been looking after his younger brother, Matias, while his mother works from 7 a.m. to 3 p.m.

At first when Juarez came home, she would shower, douse herself in liquid sanitiser and go to the kitchen to prepare meals for the boys, she said. She spent the rest of the evening in her room, communicating with them by phone.

“I was scared that I was bringing the virus home,” she said. “It was so hard and painful not to have contact.”

Later that month, she fell ill herself, was bed-ridden for 10 days and stayed off work for around a month, self-isolating in her bedroom. The health service asked her to stay at home and checked her regularly by phone. Weeks later, she was tested for COVID-19 and the result came back negative.

Gabriel did the shopping and cooking during that time and helped Matias with his schoolwork, as well as doing his own. He misses school, he said, because it’s harder to ask teachers for help. He emailed his teachers, but their answers came more slowly than they would in class.

There are times, Gabriel said, when he gets up and has to make breakfast, put the house in order, take their pet dog out and only then get to his school work. “I get up tired and it’s like everything is weighing on me,” he said, sitting with his brother and friends in masks at the dining room table where he studies.

When Spaniards were first allowed out of their houses for exercise in early May, Gabriel said he met a friend who came to help him with his studies. But after so long without contact, he didn’t know what to say or how to act.

“It’s going to be hard to go back to interacting with people because I’ve been so long without speaking to anyone.”

“HOW DOES THIS WORK?”

According to government statistics, public investment in education in Spain has fallen since 2009 to 4.23% of GDP in 2018 – a cut of around 3 billion euros. Since schools shut down, the fact that the most vulnerable families do not have computing resources has added to the difficulty.

In a child support centre in Madrid in mid-May, care assistant Turia was one of those who came to collect a tablet – one of 1,000 such devices donated in a Madrid council scheme.

Turia, who declined to give her second name, said she works from 10 a.m. to 3 p.m. as an assistant to an elderly person with Alzheimer’s and helps her two children with their school work when she gets home. She photographs the completed work and sends it back to the teachers.

There are over 1 million children in school in Madrid, where the severe poverty rate had more than doubled in a decade to 7.8 percent in 2017, according to a U.N. report from February. The minimum salary in Spain is 950 euros per month, but social security benefits, administered regionally, are around half that.

Madrid’s scheme provides just 400 euros a month for a single person, the lowest in the country, government figures show. At the same time Spain is one of the most expensive countries in Europe for fixed broadband, according to a 2020 study by the European Commission.

The education ministry said it is giving more equipment to schools and working to train teachers, students and their families how to use them. But that does not help with internet access charges, and many poorer households are far behind on technical know-how, teachers say and studies show.

About a half-dozen families came to Madrid’s child support centre that day to pick up tablets. Most said they had only a cellphone and many were not confident about using the technology.

As Turia took the computer from the worker distributing the tablets, she asked: “How does this work?”

(Reporting by Sonya Dowsett in Madrid; Edited by Sara Ledwith)

Tue Jun 23 , 2020
Click here to read the full article. Apple’s virtual Worldwide Developers Conference on Monday was, itself, a sign of the times. Like all conferences in the coronavirus era, the WWDC keynote morphed into an online-only affair with lone speakers presenting in socially distant productions, as the end credits claimed. But […] 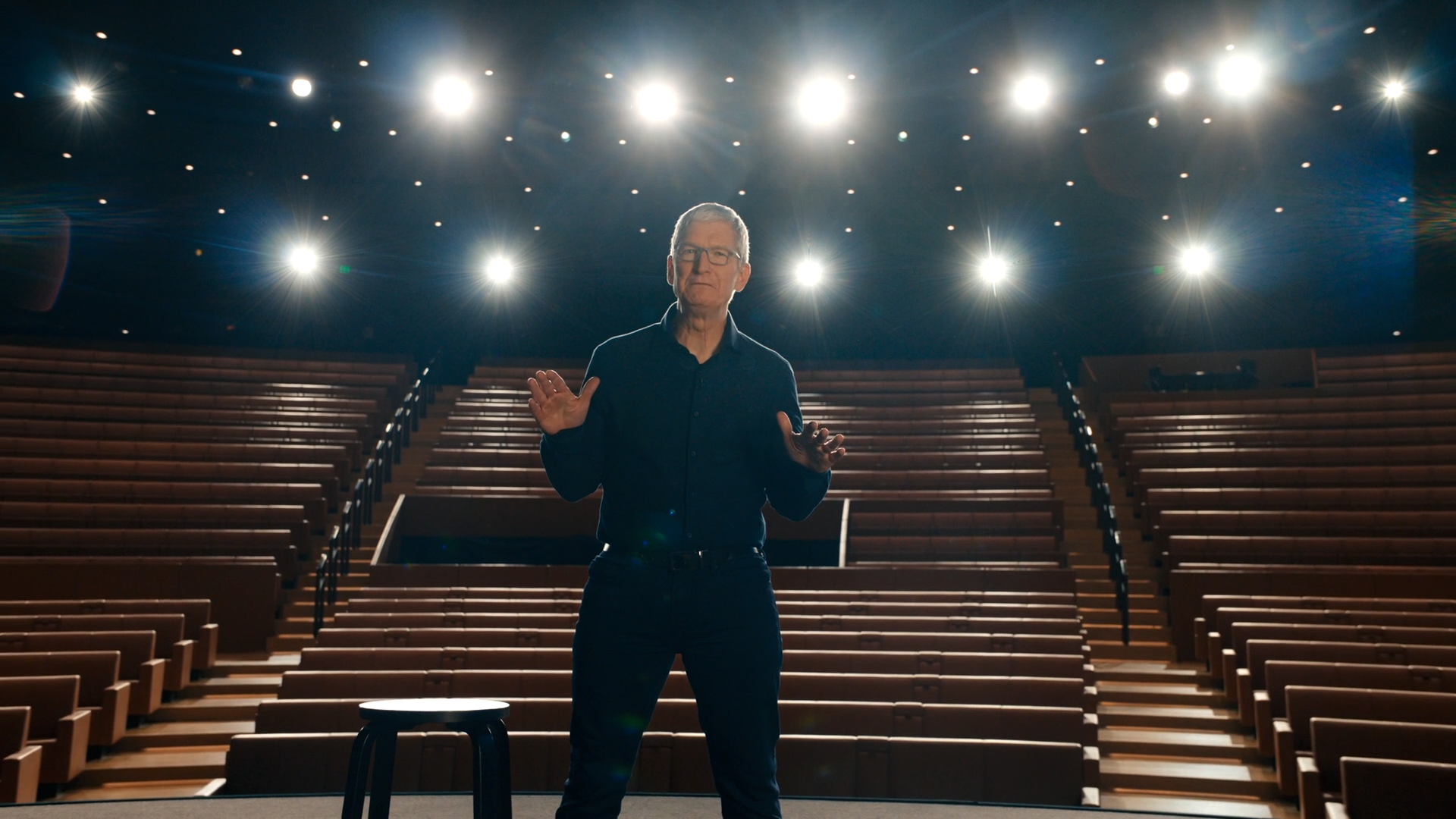