There has never been a better time to play video games. All three of the major platforms: PlayStation 4, Xbox One, and Nintendo Switch have all been around long enough to amass large libraries of great games. .

But with great choice, comes the inevitable question: Which games are actually worth playing? The answer depends on what kinds of games you like, how much spare time you have, and whether you like to play with others. This guide breaks down the best games across each console, so you know which ones rise above the rest.

What Are The Best Video Games?

There are many factors to think about when choosing the right Video Games for you; below are the most important ones, which we considered while we were researching this list.

Platform: A lot of video games are released for two or three of the main consoles, but this guide focuses on exclusive titles you can only play on one of them.

Genres: Different types of games appeal to different people, so we’ve made sure to include titles from the biggest genres: action adventure, first person shooter, platforming, and Japanese role playing games.

ESRB Rating: The Electronic Software Rating Board determines which games are appropriate for which age group. It’s the equivalent of movie ratings like G, PG, PG 13, etc. Our guide contains games that run the gamut between E (Everyone) and M (Mature), so everyone can find an appropriate title to play.

Multiplayer vs. Single Player: We made sure to balance out the games in this guide so that single player and multiplayer games are included. If you’re the only one in your household who plays games, the single-player titles we’ve chosen will last hundreds of hours but can be played in smaller chunks of time. If you want to play with friends and family, our multiplayer selections can be played over and over again without getting stale.

Online Services: Some games we chose require an online account (Nintendo Switch Online, Xbox Live Gold, or PlayStation Plus) to play with your friends. All of the games can be played without it, but you’ll be limited to playing local multiplayer. Each online subscription also comes with perks, which vary based on platform, but generally include access to free games, and discounts on digital titles.

1. The Legend of Zelda: Breath of the Wild

What It’s About: The Legend of Zelda: Breath of the Wild is a massive, open-world adventure game that rewards curiosity as you battle your way toward a fight with the main villain: Ganon. It’s a non-liner game, which means you can go off the beaten path for hundreds of hours before completing most of the game’s story.

Along the way you’ll run into dozens of interesting characters with deep backstories, complete quests, forage and cook food, battle enemies to get stronger weapons and armor, and slowly bring order to a chaotic world. This is the ultimate game to get lost in, whether you play for hours at a time, or focus on smaller, bite-sized chunks every day.

What It’s About: The Uncharted series started its life on the PlayStation 3, but this collection features the first three titles on a single disc. Naughty Dog, the series’ developer, borrowed many concepts from Indiana Jones; this is an action adventure game where you’re constantly in pursuit of long-lost treasures protected by ancient traps and other thieves.

The mix of platforming, combat, and platforming keeps the game fresh, and each game fits into a larger, overarching narrative. The more you play, the more you learn about each character’s life, and watch them develop. This is a game

If you want a storybook title with a steady pace and changing gameplay styles, it’s an excellent choice.

What’s It About: Halo redefined the console first person shooter genre when it was released on the original Xbox in 2001. This collection features a remastered version that title plus Halo 2: Anniversary, Halo 3, Halo 3: ODST, Halo: Reach, and Halo 4.

Most of the games in this collection are sci-fi shooters that require both quick reflexes and strategy to complete. Like the Uncharted Collection, the games in this package fit into an overarching narrative, which you can experience in one shot.

This is one of two titles to get an M rating because of its violent combat, so you’ll need to have some tolerance for gore. Still, if you’ve never played a Halo game before, and don’t mind its ESRB rating, this is a worthwhile game to get.

What It’s About: Mario Kart 8 Deluxe is a competitive (but family friendly) racing game featuring characters from many of Nintendo’s key franchises. You can pick between dozens of racers, karts, and courses to vary up gameplay each time you play. Although the action is very fast paced, the game does accommodate players with different skill levels in a smart way.

The item system, which allows you to pick up power ups hidden in boxes along the track. Items range from shells that can hit racers to slow them down, to mushrooms that give you quick bursts of speed. The items you get are determined by your place (one through eight) in the race, so less experienced gamers can get a better chance of winning. If you want a fun, fast racing game everyone can enjoy, this is a great choice.

What It’s About: Horizon Zero Dawn is an open world adventure game set in a world where humans and machines are constantly at war. Humans are losing the fight, so it’s up to you to destroy them, harvest their parts, and create weapons to use against them.

Because you’re under powered (at least at first), you’ll need to rely on tactical combat to bring bigger beasts down. If you like the idea of mixing stealth, combat, adventure, and strategy together, and have a fair amount of time to dedicate to gaming, you should strongly consider picking this game up.

What It’s About: To commemorate its 30th year in games veteran developer Rare bundled most of its most critically acclaimed titles in one package. Rare Replay features games from the 1983s through the 2008, some of which have been unavailable for several years. Of particular note is the inclusion of Banjo Kazooie, Banjo Tooie, Perfect Dark, and Conker’s Bad Fur Day.

These games were originally released on the Nintendo 64, but became Microsoft properties when Rare was bought by them in 2002. Unlike the other collections in this guide, Rare Replay includes titles from multiple genres and ESRB ratings. The games span different genres, but this collection is mostly made up of platformers, adventure games, and shooters. In terms of sheer variety, Rare Replay is the richest title in our guide, especially if you want to brush up on some classics.

What It’s About: Super Mario Odyssey is the latest entry in Nintendo’s most iconic game franchise. The platformer takes you through a handful of varied, detailed worlds as you search for moons, which are required to progress through the game. The big hook this time around is that Mario can take control of certain enemies to assume their form to gain new abilities.

These abilities allow Mario to get to previously inaccessible locations, and access different moons. At its heart, Super Mario Odyssey is still about Mario’s core strengths: jumping on enemies, collecting coins, and exploring different stages. Despite the similarities to other 3D Mario games, Odyssey manages to feel fresh. If you haven’t played a Mario game in a while, or want to introduce a new player to pillar of the gaming world, there’s no better choice.

Who Should Play: Rumors about Square Enix re-releasing their seminal Japanese Role Playing Game Final Fantasy VII have been floating around the internet for well over a decade, but it finally happened earlier this year. In this title you control Cloud Strife, a hired gun who joins a group of renegade bandits trying to take down the evil corporation Shinra, and ultimately Cloud’s arch rival Sepheroth.

This is a turn-based JRPG, which means you encounter enemies in the world, and attack, defend, run, or use items by selecting options from a menu. This may sound laid back, but Final Fantasy VII: Remake uses the Active Time Battle system, wherein a progress bar builds up slowly letting you know when you can make your next move. If you wait to long, your enemy’s progress bar will fill up, and they’ll be able to attack first.

You’ll gain experience each time you win a battle, which allows your characters grow stronger and gain new abilities. If you like role playing games, and missed this one the first time around, you’ll find a lot to like in Final Fantasy VII: Remake. Be warned: Square Enix broke up the original game’s story into three chapters, so this is just part one of a grander story.

What It’s About: The Forza Motorsport series has been a gold standard for simulator style racing games since the first entry was released in 2005.

The object is to race through 30 real-world courses; there are no items, and your car will sustain damage if you crash into another racer or the environment. This is not an arcade racer like Mario Kart 8 Deluxe, and does not accommodate newer players with the a helping hand.

You have to manage your speed, turns, and consider factors like the weather, which can change dynamically as you race. This game rewards your patience and persistence with a more realistic racing experience. If you have time to sink into a game, don’t mind making steady improvements over time, and love auto racing, you can’t go wrong here.

What It’s About: Octopath Traveler is a newer Japanese Role Playing Game developed by Square Enix. You assume the roles of eight characters navigating their own independent story. Each one has his or her own motivations, but the general themes of loyalty, self reflection, and personal growth run through all of them.

This is a turn-based JRPG, which means you select actions in battle, and earn experience points each time you win. You can see which character (both friend and foe) is set to attack next, and strategize to exploit your enemy’s weakness. Your characters gain levels as they progress, and you eventually have the option to change their class, which allows you to customize your party.

Octopath Traveler is a modern take on the titles Square released in the mid 1990s; if you grew up during that era, or want to sink your teeth into a long, well-told story set in a fanciful, medieval world, don’t skip this game.

See where your favorite artists and songs rank on the Rolling Stone Charts.

Thu Jul 2 , 2020
Amazon founder and CEO Jeff Bezos. David Ryder/Getty Images Amazon CEO Jeff Bezos’ net worth just reached a new high of $171.6 billion. Bezos founded Amazon in 1995. The company has since grown to one of the most valuable, powerful companies on the planet. Bezos has gone from a New […] 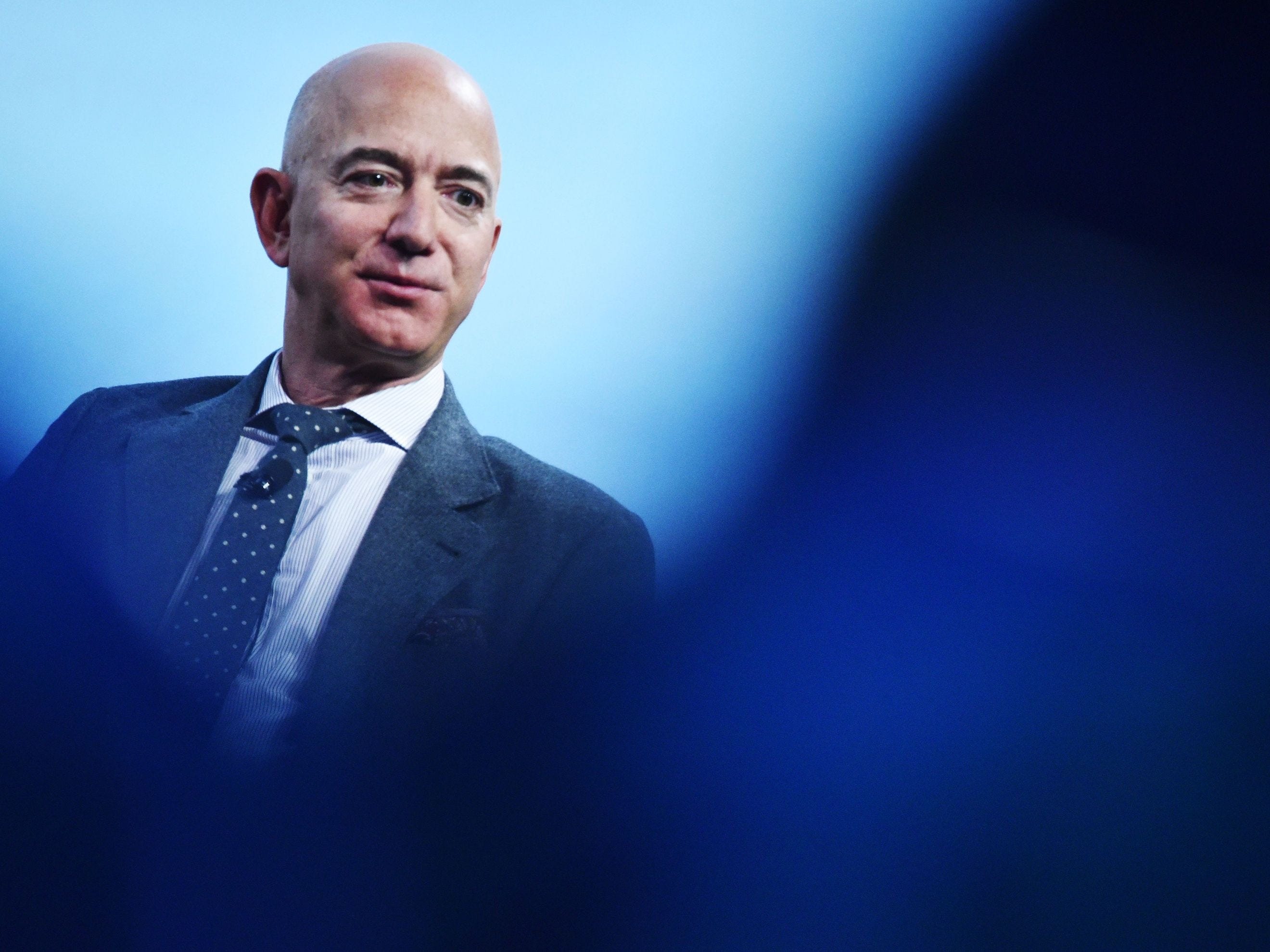