Every month, Philip Sherburne listens to a whole lot of mixes so you only have to listen to the best ones.

In the past month, Black Lives Matter protests in response to the police killing of George Floyd have led to corrections across culture. In the club world, part of that reckoning means remembering that dance music is Black music—not just in its roots but also its present state, no matter how far the music may have traveled from its origins in Black communities in Chicago, Detroit, and New York. Dance music is made and enjoyed all over the world, but its origins are rooted in Black history and Black experience (often queer and working class). The music’s international spread has too often meant that Black musicians’ contributions get left out of the narrative. Dance fans have an obligation not just to celebrate the music’s origins but to champion its Black creators then and now. This means reading up on techno’s Black history; this means looking past the prejudices of the usual algorithms and using tools like blackbandcamp.info, a crowd-sourced list of Black artists on Bandcamp.

For this month’s column, I am highlighting exclusively Black artists and DJs. In part, it’s a first step in confronting my own ingrained biases and taking steps to feature more Black artists, particularly those on electronic music’s fringes. This month’s selection also feels like a strong sampling of the creative energy Black musicians are bringing to electronic music right now. That energy courses through MoMA Ready’s dynamic mega-mix of a Juneteenth compilation from his label HAUS of ALTR; that energy is what drove the London DJ Sherelle to put together an exhilarating and empowered set for Dekmantel, a Dutch festival that has faced criticism for neglecting artists of color. Other sets in this roundup aren’t explicitly reactive to current events—but against the backdrop of the present moment, their innovative spirit is all the more inspiring.

HAUS of ALTR, New York producer MoMA Ready’s label, is a growing hub for a vital new underground club scene, one that includes a multitude of styles—house, techno, jungle, footwork, and more—while carrying on dance music’s Black, brown, and queer legacy. So far, MoMA Ready and his friend AceMo have been responsible for most of the label’s releases, whether separately or in the duo AceMoMA. HAUS of ALTR’s latest offering, HOA010, is billed as a snapshot of the future of Black electronic music. It’s a stellar compilation that draws from the broader community around the label, spanning Akua’s livewire techno, Bookworms’ murky breakbeats, Galcher Lustwerk’s whispered raps, and Russell E.L. Butler’s whirlwind drum’n’bass. MoMA Ready’s mega-mix of the album is even more ambitious: It starts out softly enough, with g-funk synths over silky deep house, before turning tougher with stuttering club kicks, lo-fi sonics, and the looped vocal samples of classic New York house. Following the set’s path feels a little bit like wandering from room to room in a labyrinthine warehouse rave: By 40 minutes in, concussive techno is beating sweaty dancers into submission; a little further on, footwork’s triple-time rhythms are making a blur of moving limbs. There’s a lot of ground to cover, and MoMA Ready claims it all with panache.

Sherelle, a London DJ specializing in jungle and footwork, was originally scheduled to appear at Amsterdam’s Dekmantel festival this summer. As a Black queer woman acutely aware of dance music’s frequent erasures, she had intended to make a statement there: “The set I was planning this year was going to serve as a massive fuck you to the people who didn’t want to see me on their fave ‘techno’ festival,” she wrote on Twitter. Instead, with those plans shot and Black Lives Matters protests sweeping the U.S. and UK, Sherelle hunkered down in her studio this month to deliver what she calls “80 minutes of pure angst.” She kicks things off with rolling drum’n’bass and sticks to that 160 BPM speed throughout the session. The set is intense but also varied, weaving between the rolling “Amen” breaks of vintage hardcore and the precision beat science of contemporary d’n’b. The mood in the second half is especially electrifying, as rough-and-tumble ragga jungle gives way to the sugary vocals of Coco Bryce’s Supremes-sampling “Ma Bae Be Luv.” Musical middle fingers don’t come much more thrilling than this fast-paced, dynamic, and defiantly borderless set.

Kush Jones’ stellar new EP for D.C.’s Future Times label marks the prolific New York producer’s first vinyl release, and his most relaxed offering to date. Its deep, enveloping house, while quick-stepping, is nowhere near as hectic as the double-time cadences of his footwork. He taps the latter vibe on his RA podcast, a 160 BPM juggernaut of footwork and juke that juggles tunes from scene giants like DJ Rashad and RP Boo with a handful of his own tracks. Jones’ own songs are the standouts: “Is It Possible” wraps flickering hi-hats around the spoken refrain, “Is it possible for you to shut the fuck up?” “Jiggiest” is a dreamy foray into jazz-funk, and the gnarly “Acidic” is just that. Jones’ relentlessly paced mixing is electrifying, while his selections—encompassing minimalist drum fugues, hypnotic chants, and dizzyingly reconfigured jazz samples—shine a light on how ambitious footwork can be.

Deep, soulful house reigns in this gorgeous set that Ash Lauryn played at the inaugural edition of Club Quarantäne, an online party, back in April. The Atlanta-based Lauryn is originally from Detroit, and you can hear it in the richness of her selections, which lean toward colorful synths, restless basslines, and inventive jazz keys. She pays tribute to her hometown early on with the late Mike Huckaby’s remix of Cazz Ear and Ursula Rucker’s “Been Waiting”; a few tracks later, Detroit’s Patrice Scott unleashes a free-flying synth solo in a spirited remix of French producer Solune’s “Colibri.” She keeps things lively right up until her final curveball: the O’Jays’ “Get On the Move,” a 1983 funk jam that practically dares listeners to stay seated, quarantine or no. It’s the kind of set that’ll simply make your day feel better.

The London producer Steven Julien can squeeze more emotion from one squelchy bass riff or terse snare drum than many electronic musicians can from a whole rack of outlandish effects. The Apron Records boss brings the same spirit of restraint to the latest installment of his monthly show for NTS Radio. That doesn’t mean the music is spartan—he opens with graceful piano and synthesized strings—but most of Julien’s selections try to do more with less. A Jay Daniel cut carves out space in between filtered synths and a measured machine beat; a slow-motion grind by the UK’s Lord Tusk conjures an imposing science-fiction setting with just a few woozily contrasting chords. An air of low-key funk runs throughout the set, making it feel like a cohesive, expertly told story.

These days, you rarely hear about illbient—a strain of heady, hip-hop-adjacent electronic music that came out of ’90s New York, where renegade warehouse parties hosted wild experiments in live electronic performance and turntablism. The ambient musician Forest Management’s Roof Music mix does the public service of surfacing music from a number of illbient pioneers, including Lloop, DJ Olive, Byzar, and We ™. It’s a deep, enveloping listen; illbient borrowed from dub in its intense pursuit of pure vibe, and that’s precisely what Forest Management delivers via a succession of cut-up breakbeats, bass meditations, and weightless reggae. Turn-of-the-millennium glitch music comes into play via We ™’s “Transient Scratch,” and the X-Ecutioners’ “The Turntablist Anthem” is a neo-soul gem that’s ripe for rediscovery. It wraps up with a live performance of DJ Olive absolutely murdering a recording of Fleetwood Mac’s “Dreams,” chopping it up willy-nilly—a reminder that beneath the supine grooves, illbient often harbored a mischievous spirit.

Joey Anderson came up as a house dancer, competing in battles and even teaching in Japan. That’s key to understanding the music he makes; someone with an intuitive grasp of how dance music moves can make their own music move in unusual ways. But what’s less frequently observed is that rhythm isn’t the New Jersey native’s primary mode of expression—at least, not in his percussion. Anderson’s drum programming tends to be lean, even austere; his signature lies in his wispy synthesizers, which twist like plumes of smoke. There’s no tracklisting for this set, but I’d guess that most of the productions are his; they certainly sound like him, with pale streaks of quavering tone threaded over crisply stepping machine grooves. Sometimes soothing, sometimes dissonant, the mix conveys both outward calm and inner turmoil.

Tbilisi, Georgia is the home of one of Europe’s most celebrated dance-music scenes right now, and in the past year, the city’s Mutant Radio has emerged as a world-class online platform, broadcasting local fixtures like Gacha Bakradze alongside international talents like John Talabot and Ana Helder. This set from Chicago’s Hakim Murphy is an understated gem: a subdued yet emotional tour of richly melodic techno and house. Murphy began DJing in 1996 and started putting out records a decade later; he grew up absorbing the sounds of his hometown fixtures like Larry Heard, whose influence is clear in the no-frills drums and silky synths that Murphy gravitates toward. No matter how lulling the keys of a track like D’Marc Cantu’s “The Lodge,” though, there’s real muscle underneath, and even the gentlest passages occasionally erupt into psychedelia. The closing stretch of funk and disco, meanwhile, is a giddy chef’s kiss.

Not many DJ mixes feature the artist grabbing the mic to identify the musical key for the benefit of listeners at home. But then, not many DJs are Laraaji, the New York new-age musician, spiritualist, and teacher who began putting out trance-inducing zither music on small-run cassettes in the 1970s. (Brian Eno produced Laraaji’s 1980 album Ambient 3: Day of Radiance after encountering him playing in Washington Square Park.) Laraaji’s invitation comes early in this set, which he describes as a “therapeutic listening mix”: “Right! For those of you who want to jam along,” he says genially over a steady, tabla-like beat, “on guitar, flute, bass, I am in the key of C Major. C Major pentatonic, if you please. A equals 440. I’m just going to jam along, and allow you to express yourself.” With that, a rainbow seems to pour forth from his zither, and soon he is singing wordless syllables (“Lum lum lum lum lum lum lum”) in chipper tones.

A mixture of home recordings and works in progress, Laraaji’s mix makes for an immersive hour: There are prayer bells, chants, piano soli (from his upcoming Sun Piano album for Warp/All Saints), and even a sound bath on Tibetan bowls and electronic zither. Part of Laraaji’s practice involves something called laughter meditation, and it makes an appearance 20 minutes in: “Bring forth your highest vision; bring forth your healing laughter now,” Laraaji intones, launching into full-body chuckling and chortling that radiates positivity. But the laughter that closes the set is far stranger: Recorded in a room full of people, the five-minute chorus of shrieks and bellows turns strange, animalistic, even psychedelic. It’s an unsettling coda to a deeply centering hour—yet that fundamental strangeness makes the whole thing that much more fascinating. 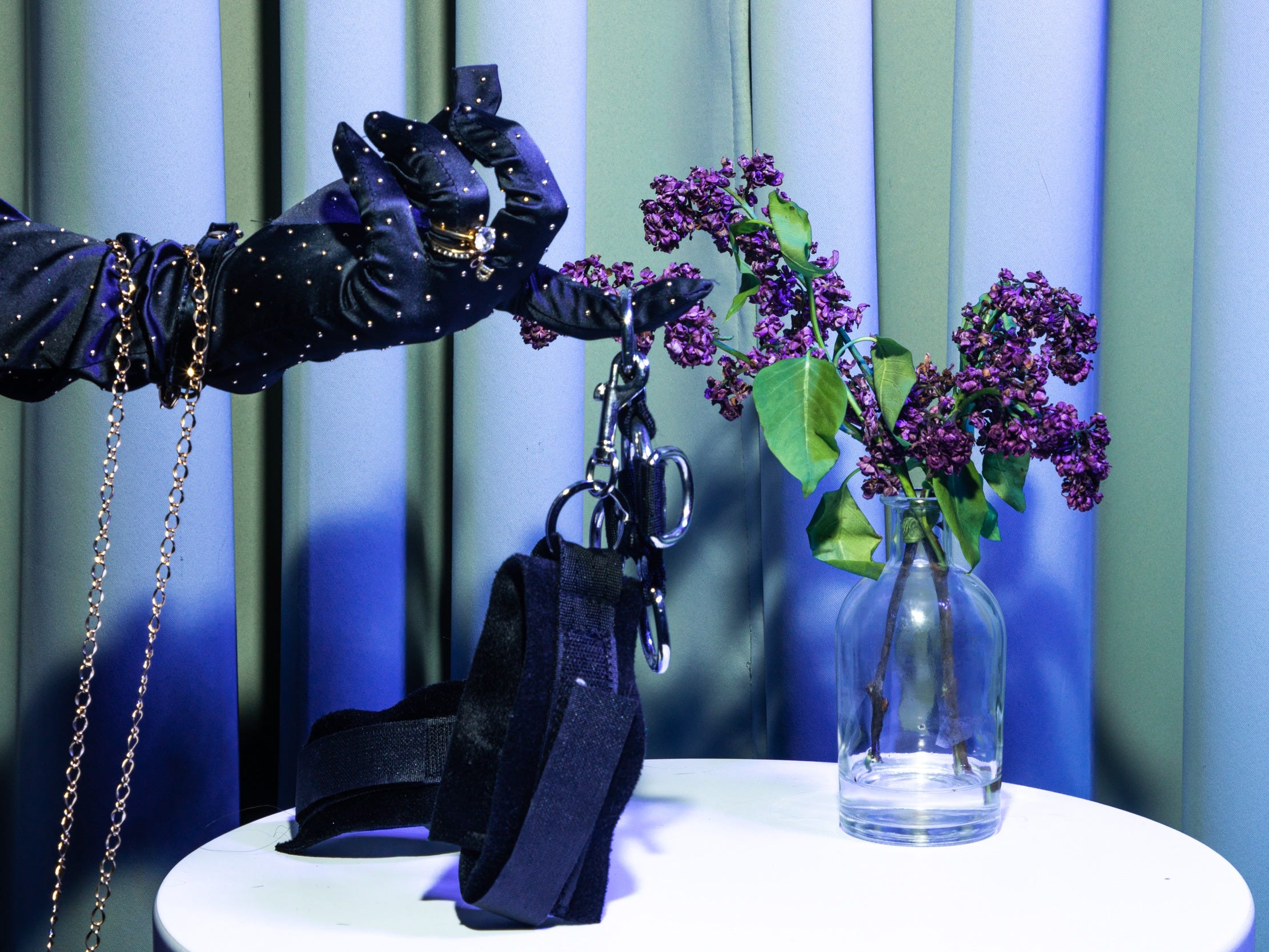