Elyssa Katz, a Santa Monica mother of three, is growing a matchmaking service to connect families with tutors, or “Zutors”, as she calls them – a word she’s in the process of trademarking.

“The role of a Zutor is a tutor, a nanny, and an angel for a parent,” Katz told the Guardian, someone who can take over parental demands, help children with online homework and take them outside when it’s time for “recess”.

Katz’ clients range from the rich and famous, to everyday people who need childcare because they can’t look after their children while they have to work. Katz said she’s gotten calls from parents as far away as the Hamptons.

For a matchmaking fee that can range from $700 to $1,000 (£549 to £785), Katz and her team will interview tutor candidates, run background and reference checks, then match them to the right families.

Related: ‘The most stressful time ever’: how coronavirus affects children’s mental health

“Some services are charging as much as $125 (£98) an hour. This is LA. There are some people for whom money isn’t really an object, people who say ‘I want this for my kids and I’ll do anything I can for them’,” Katz said.

As US school districts finalize plans for the fall semester and classes in some districts are set to remain online, some parents have begun teaming up to form “pods” with other families and arrange their own forms of education.

The arrangements come in different forms, from Katz’s expensive, boutique service to families considering renting apartment space to serve as a home base for DIY “microschools”, to less formal arrangements that enlist the help of virtual tutors who can supplement online instruction for a couple of hours a week.

The rise of these arrangements are a testament to the desperate worry of many parents over their children’s health and academic development amid unprecedented school closures. But it has also raised questions about whether these kinds of arrangements exacerbate long-standing patterns of segregation and inequity in education.

Families have always looked for solutions outside of the traditional school system, not all of them wealthy. Homeschooling, for example, allows parents to legally operate outside of the public education system.

But in contrast to a school district that must provide services to all students, resources like private tutors are most easily accessible to those who can pay. And the ways families select others to join their pod – which come down to similar neighborhoods, incomes, or ability levels – has the potential to reinforce existing inequalities, said Robin Lake, the director of the Center on Reinventing Public Education.

“I think what we will see is families self-selecting into pretty similar groups. That kind of segregation already exists in our school system. This would just exacerbate it,” said Lake.

Inequities in the US education system existed long before the coronavirus.

Schools are profoundly stratified by race and income, with higher-income school districts commanding bigger budgets for education programs per student, and affluent parents effectively able to buy into exclusive schools by owning houses in expensive areas.

In California, as in every state, those divides are reflected in student outcomes, as well. Nearly 70% of Black students and 60% of Latinos failed to meet state standards for literacy in 2019, while just 24% of Asians and 35% of white students fell below standards.

Research suggests that school closures will result in a loss of learning progress for most students, with some expected to lose the equivalent of a full academic year. Students of color, who disproportionately lack access to devices and the internet, are expected to lose most.

While it’s too soon to forecast how the rise of private tutors will impact disparities, Morgan Polikoff, an associate professor of education policy at USC’s Rossier school of education, said the growth of the gap will depend on how common the trend becomes.

“If it’s just a case of a couple percent of very wealthy families opting their kids into this kind of arrangement, I don’t really see how that’s any different from them sending their kids to some elite private school,” said Polikoff.

“If it’s a wider-spread phenomenon that affects more families, then I think it could lead to meaningful widening of achievement gaps,” he added.

Lian Chikako Chang, a San Francisco-based parent with a background in marketing, has seen a huge demand for tutoring services in recent weeks. “This isn’t a niche topic anymore,” Chang said.

Within seconds of creating a Facebook group for parents interested in forming pods and microschools, Chang had her first member. Thirteen days later, more than 10,000 parents had joined or requested to join her group.

Chang concedes that the group has grown so quickly it hasn’t had time to iron out all logistics or build in ways to protect families from being excluded unfairly, but said the group has been concerned about implications for equity from the start.

Important, she said, is trying to find a way for parents to ask each other personal questions in a way that isn’t inherently discriminatory. Parents may ask each other, for example, whether a family member’s work brings them into the community without realizing the question can exclude children of essential workers – jobs held disproportionately by Black and brown communities.

“We hear the concerns for equity, and agree it’s serious. But it’s tough. Parents have a responsibility to make arrangements when the schools cannot,” Chang said.

‘Pods aren’t the only solution’

Those responsibilities have only grown larger as school closures continue on. Advocates have warned for example that students with disabilities can be short-changed on the education services they typically received in person. It’s understandable for parents to want to fill that void, said Lake.

“Are we going to pass judgement and shame families whose children have special needs for creating an opportunity their schools didn’t provide at all? I know I won’t,” Lake said.

She points to organizations like Oakland REACH – made up of students and parents from Oakland’s lowest-performing schools – as example of a group creating their own solutions. REACH has created a robust online summer school program it plans to continue into the academic year.

Lakisha Young, the organization’s co-founder and executive director, says she remains deeply concerned about the inequities facing her community, but wants people to understand the importance of parents coming together to create alternative models of education that work for their communities.

“That’s what I feel a kindred spirit around. Parents are taking the lead. I just don’t want people talking about pods and thinking that’s the only solution,” she said.

“This game isn’t going to be won or lost based on what our systems are doing.”

‘Teachers shouldn’t be criticized for doing this’

It’s not just parents and matchmakers driving the market. Educators, some out of work, some hesitant to return to the classroom for fear of infection, are also searching for ways to put their skills to use.

Maia Lazar, who has been a substitute teacher in the Los Angeles area for the past four years, is a member of Chang’s Facebook group and is hoping to be hired by a family or group willing to pay her $1,000 (£785) a week to teach exclusively to their pod – an arrangement that would minimize her exposure to the virus.

Lazar said she shares a concern for equity, but doesn’t believe teachers who privately offer their services to make a living should be shamed for doing so.

“Individually, a teacher shouldn’t be criticised for doing this,” she said, adding that she is helping to organize educators willing to donate their time to families who can’t afford to hire a tutor but want assistance.

In recent days, some members of the Facebook group have floated ideas for creating more inclusive pods, including efforts to recruit students from Black or Latinx families and sponsor their fees.

But Lazar sees that approach as fraught. “You’re seeing people say that they’re willing to sponsor a person of color, but that can also be problematic, because you’re assuming all people of color don’t have means,” she said.

Meanwhile, some educators are accepting that pods, microschools and private tutoring are part of the picture – at least in California, where the majority of schools are unlikely to resume in person anytime soon – and are turning their focus instead on how to make them more equitable.

Elisha Smith Arrillaga, the executive director of The Education Trust – West, a research and advocacy organization focused on educational justice, said she’s been fielding a lot of questions about pods in recent days.

“We can’t dictate individual parent choices, but we haven’t done enough to make sure our vulnerable students are getting what they need regardless of what high-income parents are doing,” she said.

“These pods arising means that we need to even more urgently look for ways to get every student everything they need.”

Combative TikTok Founder Races to Save App Before Trump Ban

Thu Jul 23 , 2020
(Bloomberg) — Zhang Yiming is the little-known Chinese entrepreneur who built TikTok into one of the most promising franchises on the internet. Now the brainy, combative founder is under pressure to save the business from Trump administration threats. Venture investors in TikTok parent ByteDance Ltd. have approached Zhang with a […] 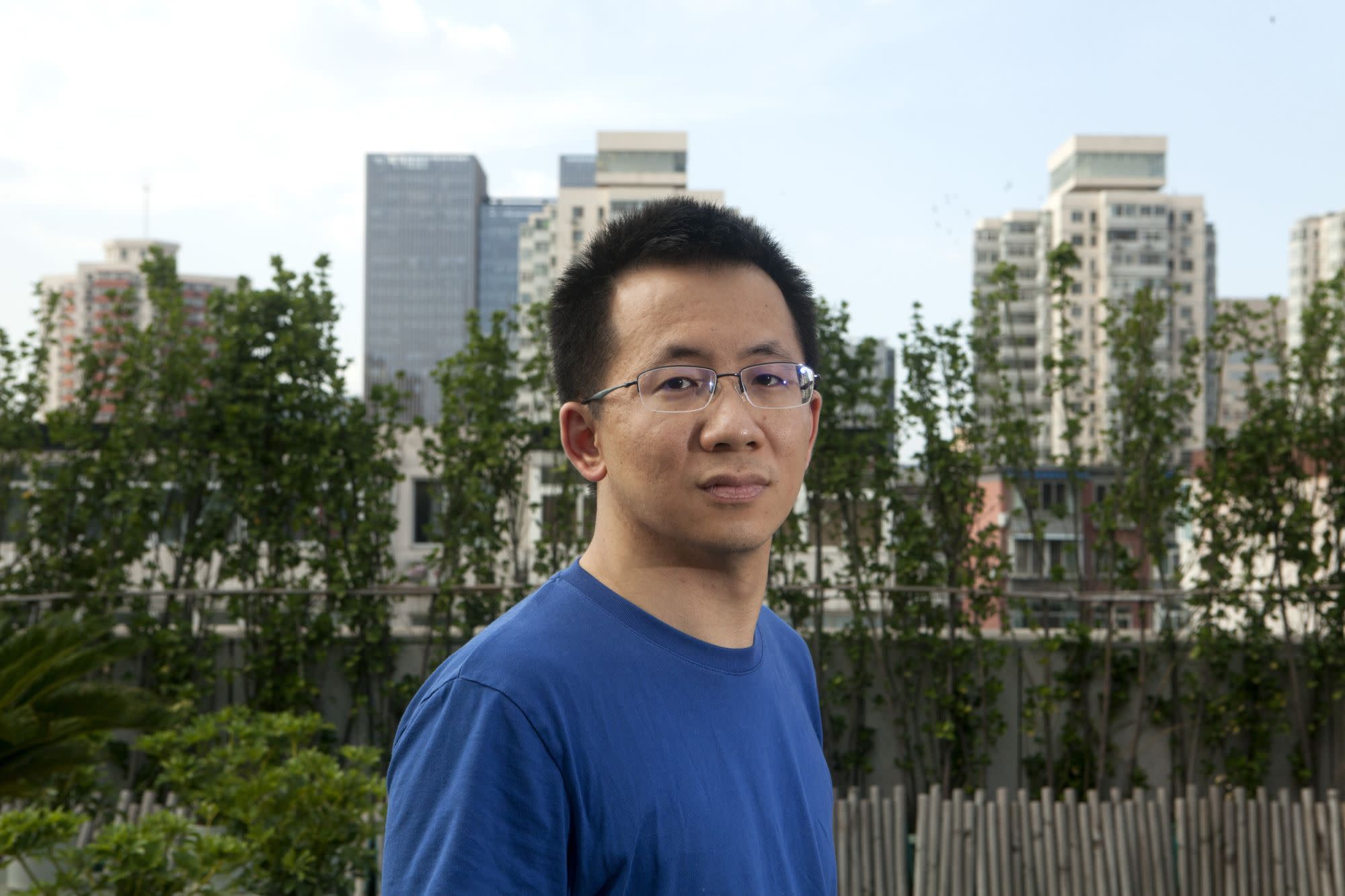