‘It was frantic,” says Tim Steiner, the co-founder and chief executive of Ocado. “For weeks the team did not know what day of the week it was. It went from ‘oh look, there’s a lot of demand’ to ‘holy s—, what’s happening now?’.”

As households locked down and flooded the Ocado website in March, tens of thousands of customers were left staring at a virtual queue with slim hopes of gaining entry, never mind booking a prized delivery slot. Ocado’s software was on the brink of collapse, behaving as if it was under siege from cyber criminals who bombard digital services with fake traffic to deny real customers access. Except the surge in visitors was completely genuine.

“We were fighting fires to some extent,” Steiner recalls. “To the point where you spend 20 years building a shop to encourage people to come in and then basically you need to keep people out of the shop so that the people that were in the shop could shop. We had to develop a lot of software to control who was coming into the shop and who had access to delivery slots because there was demand probably 10 times our capacity.”

As the pandemic battered the consumer economy, these were nice problems to have. The share of the overall online shopping has almost doubled in recent months from 7pc before the pandemic to 13pc in May, according to data firm Nielsen. Its share of the overall grocery market hit a record of 1.7pc last month, rival research house Kantar reported. Financial success should follow.

When it updates the City this week, Ocado is expected to post a surge in sales of almost 30pc for the first six months of the year. Its grocery business is expected to make a profit, not something the serially loss-making firm is used to.

Steiner believes Ocado now has a golden opportunity to press home its advantage. Many shoppers who turned to the web during lockdown will now permanently stay away from physical stores, he claims, at home and abroad.

Ocado plans to rapidly expand both its own website and the production of robot factories for supermarkets. The company is on the front foot despite being caught off-guard when coronavirus hit.

Ocado’s robotic warehouses, where groceries are picked and packed, cannot be built overnight, leaving it relatively inflexible. Meanwhile, bricks-and-mortar rivals such as Tesco and Sainsbury’s managed to double their capacity by hiring more pairs of human hands, albeit at a higher cost.

Tesco could handle 1.3 million orders per week at the peak of the crisis, compared with Ocado’s roughly 250,000. Such realities have been no deterrent to the company’s committed fan club. Since March 12, the day on which Boris Johnson declared that Covid-19 would be “the worst public health crisis for a generation”, Ocado’s shares are up more than 85pc to £20.

Steiner, sensing an opportunity, last month tapped investors for an extra £1bn to help fund his plan for global domination. Ocado raised £657m with a 5pc share placing, topped up with bonds that will convert into stock if the shares reach a price of £26.46.

For Steiner, the cash injection “is about being able to go faster”. “We had a lot of cash, but to do that you have to make sure you’ve got the capital and that’s where we are,” he says.

His own funding, £59m last year after a big bonus payout, drew a 30pc protest at Ocado’s AGM, held without shareholders in attendance in May.

Over 20 years the company has built up a roster of notable backers, including Nick Roditi, a former key lieutenant of George Soros; Jörn Rausing, heir to the Tetra Pak fortune and a non-executive director; and Italy’s billionaire Agnelli family.

Having seized his opportunity to raise money at a pandemic valuation, Steiner will now be under pressure to use his war chest wisely, according to City sources. “There is starting to be a little bit of fatigue from investors,” says one observer in the Square Mile. “Even if Ocado has headroom to raise more money without doing a rights issue, people will probably turn around and say, ‘well, we need to see a return on the cash we’ve given you first’.”

The next few months will bring new challenges. In September, Ocado will end its long partnership with Waitrose to replace its products with M&S’s, which paid £750m to muscle in last year. Ocado risks a customer exodus after a straw poll by analysts at HSBC suggested that shoppers were loyal to Waitrose, and M&S’s products were not “adequate”.

Archie Norman, the M&S chairman, has already warned that the transition will be “slow”. Continued capacity constraints will mean new customers will not be able to sign up.

One grocery rival says: “They’re already at capacity, how are they going to deliver all these new orders?”

Investors may not care, however. Most of the excitement surrounding Ocado is focused on its prospects as a technology provider, able to sell the same set of robotic warehouses and website systems to multiple international supermarkets.

“The most transactional and profitable part of the Ocado Group is Ocado Retail, to which the market seems to ascribe the least value. Where the value sits is in Ocado Solutions,” says Clive Black, an analyst at broker Shore Capital. Steiner’s inability to sell his technology to other companies was ridiculed for years. Sir Terry Leahy, the former boss of Tesco, even referred to the online grocer as a “charity”.

Ocado was vindicated three years ago when he announced a tie-up with France’s Casino chain.

It has since sold 54 automated depots for seven supermarkets overseas, including Kroger in America and ICA in Sweden, to help them compete with the likes of Amazon. And since coronavirus, to capitalise on the boom in online grocery too.

The fee agreements are cloaked in secrecy, but in its pitch to investors last month Ocado claimed that the market could be worth up to £26.3bn.

Steiner, who inherited some of his entrepreneurial flair from his mother, Linda, founder of a beauty brand, still divides opinion, but his doubters continue to be confounded.

“It hasn’t made any money for the best part of 20 years, is not expected to make any [significant] money, and I wouldn’t be surprised if they just announced more fundraisings in the future, but it is ascribed an enormous valuation by the market and, you know, the market doesn’t lie. One has to accept that, and congratulate Ocado, for what they’ve done. It is a remarkable and distinctive story.”

Mon Jul 13 , 2020
Rappcats record shop in Highland Park, which has survived amid the COVID-19 pandemic. Other neighborhood stores have not been as fortunate. (Gina Ferazzi / Los Angeles Times) On March 7, Ryan Pollie threw the inaugural Highland Park Folk Festival, a free concert and comedy show held under the winsome tree […] 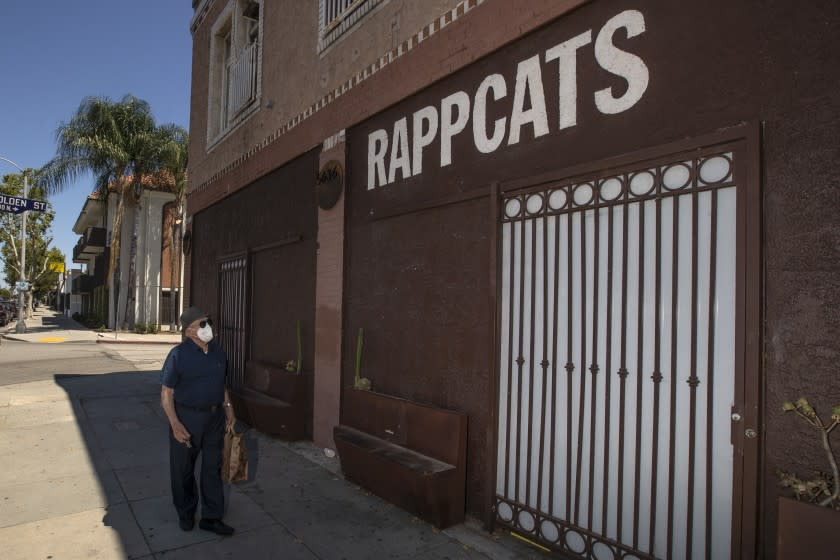