A firestorm of bad press and user fury ensued. Then, in December 2015, The Guardian reported that Sen. Ted Cruz (R-Texas) had harvested “psychological data” from millions of Facebook users for his presidential campaign, relying on a small firm known as Cambridge Analytica that specialized in helping elect right-wing politicians.

These were the days before Facebook had been weaponized to incite genocide in Myanmar or livestream mass shootings in New Zealand or proliferate the far-right propaganda that helped elect Donald Trump. But there were plenty of indications that something was amiss with the world’s most popular social network ― which was already under a November 2011 consent order from the Federal Trade Commission requiring the company to take better care of user data and privacy.

At that time, Kamala Harris was the top state law enforcement official overseeing Facebook and every other major tech company in Silicon Valley. As attorney general of California, she possessed sweeping powers to rein in tech platforms.

“There’s a lot that attorneys general across the country could have done to rein in Big Tech,” according to Sally Hubbard, director of enforcement strategy at the Open Markets Institute, an anti-monopoly think tank. “Most notably, challenging the Instagram and WhatsApp mergers.”

Harris, like federal regulators in the Obama administration, never confronted these metastasizing threats to American democracy from either an antitrust or a consumer protection perspective.

Those deals, from 2012 and 2014, took place during Harris’ tenure. And yet Harris, like federal regulators in the Obama administration, never confronted these metastasizing threats to American democracy from either an antitrust or a consumer protection perspective. Even well into her 2020 presidential campaign, she pursued a soft touch with Big Tech, issuing vague promises to secure consumer privacy protections as her rivals for the Democratic nomination ― most notably Sen. Elizabeth Warren (D-Mass.) ― vowed to break up Facebook and implement ambitious new regulatory regimes.

More than 1,400 pages of emails obtained through a Freedom of Information Act request help explain this inaction, showing that Harris generally viewed Big Tech as a partner rather than a threat. At times, she even teamed up with tech companies to market herself as a rising star in American politics ― a depiction that proved correct with her election to the Senate in 2016.

Today, Harris is a leading contender for the Democratic Party’s vice presidential nomination. One of the most pressing questions for the next administration will be how it chooses to grapple with the corporate behemoths that have come to dominate American life and culture. This look inside Harris’ record with Big Tech suggests a politician eager to make friends in the tech elite and uninterested in substantive reform.

Leaning In, Leaning Out

In February 2013, Facebook Chief Operating Officer Sheryl Sandberg wrote to Harris asking for a glossy photograph of the AG and a personal story demonstrating how Harris had “leaned in.” Sandberg was looking for stories of powerful women proving their mettle in the male-dominated upper echelons of American power, from boardrooms to statehouses. As the top law enforcement official in the biggest state in the country, Harris was a natural choice.

Sandberg asked Harris to participate in a massive PR rollout for her soon-to-be-released book ”Lean In.” When it came out in March 2013, Sandberg’s memoir was celebrated as a women’s rights triumph ― a road map to everything women could aspire to be in the corporate hierarchy. The ”Lean In” marketing campaign was intimately connected to Facebook itself. Ordinary women who wanted to follow the Lean In movement had to sign up through a Facebook account and “like” Lean In to receive further career advice.

Harris passed along a headshot and her own “Lean In” story ― a tale of how she got her start in electoral politics running for district attorney of San Francisco in 2003 as a long-shot upstart who defeated several male challengers.

Harris was far from the only public figure to join in the marketing splash. In 2013, Sandberg was an aspirational feminist hero, and millions of professional women drew inspiration from the message of her book. “Sandberg is not just tough,” wrote Anne-Marie Slaughter in a glowing New York Times review. “She also comes across as compassionate, funny, honest and likable” ― everything an ambitious young woman could hope to be. Slaughter was a former State Department official about to be named head of the New America Foundation, a liberal think tank.

So nobody made a fuss about a state law enforcement official joining a PR push for a top official at a company she ostensibly policed. The idea that either Sandberg or her company represented any kind of public policy problem was beyond the scope of what most politicians considered political.

But she didn’t go after the tech companies themselves. In 2013, she brought a case against Kevin Bollaert, the 27-year-old founder of UGotPosted.com,  a site where vengeful people could post photos of their exes. Bollaert was also the founder of ChangeMyReputation.com, a site that charged people a fee to take down those compromising photos. It was a clever scam: letting bad actors post material without consent on one site and then forcing victims to pay him to take it down.

Harris threw the book at Bollaert, who was eventually sentenced to 18 years in prison. For women’s rights activists, it was a victory ― free speech claims online didn’t include efforts to humiliate people sexually without their consent.

But Harris’s arguments in the case explicitly shielded Silicon Valley from any implications. Bollaert was responsible for what happened on his site because he was a publisher, not a neutral platform. Companies like Facebook had different legal protections.

Harris was aware that something was going wrong at the most powerful and profitable institutions in her state. But she chose not to confront them, instead focusing on small-time players who didn’t carry political influence, while the tech giants matured into one of the gravest threats to American democracy.

The emails show that Harris convened private meetings for her cyber exploitation program throughout most of the year, finally launching the initiative as a public campaign in October of 2015. Tech companies committed to changing the way they monitored abusive content on their platforms. Harris praised their efforts in a June 2015 Marie Claire profile, which her office repeatedly emailed out to representatives from the firms over the months ahead of the October launch.

“I asked some online companies to come in for a meeting about how we could create a safer environment online,” Harris told Marie Claire. “They were wonderful. Many companies really want to lead on this issue because this is the reality of innovation: You create something new that has incredible benefits, but then you see there’s another side. We want to minimize, if not eliminate, the harm that can come as a result.”

On the day of the launch, Harris’ office described it as a “nine month collaboration between Attorney General Kamala Harris’s office, major tech companies, law enforcement and victims’ advocates.”

For Harris, tech companies were part of the solution, not the problem. “I cannot emphasize enough how leaders in technology have stepped up,” she said during a press conference.

It was hard to miss the different approach Harris had taken with powerful political actors and small-time crooks. Bollaert got 18 years, while Google and Facebook got a meeting and public praise.

A Soft Touch And Big Checks

But by 2017, Harris was no longer in state government. She was elected to the Senate in 2016, backed by roughly $214,000 in campaign contributions from Big Tech, including the maximum individual donation allowed under California law from Sandberg herself.

Two days after the election, Sandberg wrote to congratulate Harris.

Three years later, Harris is a top contender for Joe Biden’s VP slot after a jumbled presidential run of her own, making her record with Big Tech and what it reveals about her judgment more than a historical curiosity. Harris was aware that something was going wrong at the most powerful and profitable institutions in her state. But she chose not to confront them, instead focusing on small-time players who didn’t carry political influence, while the tech giants matured into one of the gravest threats to American democracy, a vector for Russian propaganda, white nationalist organizing and even terrorism.

Facebook CEO Mark Zuckerberg, meanwhile, has developed a close relationship with Trump and is bending the platform to fit far-right proclivities. Sandberg has made a point of attending photo ops with Trump and Vice President Mike Pence.

As a senator, Harris has been mostly quiet on policy-making issues with implications for Facebook and Google. She sat out the debate on a 2018 sex trafficking bill ― once her signature issue ― only entering her name as a co-sponsor after it was clear the bill would pass by a wide margin, fearing a backlash from Big Tech.

Last year, as other contenders for the 2020 presidential nomination called to break up Facebook and Google, Harris again suggested a lighter approach.

“I believe that the tech companies have got to be regulated in a way that we can ensure and the American consumer can be certain that their privacy is not being compromised,” Harris told The New York Times in January 2019.

When pressed on whether that included break-ups, Harris dodged. “My first priority is going to be that we ensure that privacy is something that is intact.”

“All of the problems with Facebook all come down to two things,” notes Hubbard. “Its business model and the fact that it’s a monopoly power. You can’t fix that with better privacy standards.”|

This article originally appeared on HuffPost and has been updated.

Fri Jul 17 , 2020
(Bloomberg) — A landmark 40-year-old law that’s been key to the growth of renewable energy in the U.S. is being effectively overhauled, threatening to curb demand for solar projects. Federal regulators on Thursday imposed new limits on which energy projects fall under the Public Utility Regulatory Policies Act, known as […] 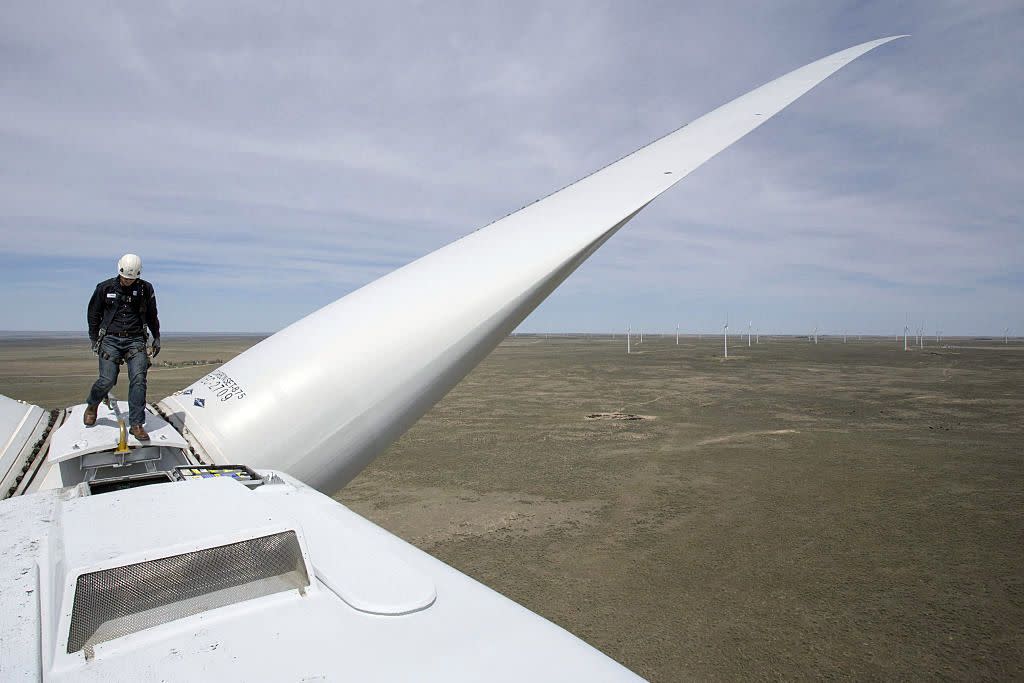