Entanglement. One word. Four syllables. A euphemism for an extra-marital relationship that broke the internet. While our celebrity obsessed culture watched the fantasy we purported of the pristine image of the Will Smith and Jada Pinkett-Smith marriage implode bursting our own bubbles in a series of interviews (August, Jada) and a new R&B banger, I wondered to myself how they managed to continue to survive in their new space of “life-partnership.”

Marriage is hard. It is in and of itself the definition of an entanglement: “To involve in difficulties.” I have been married for eight years. My husband and I have been together for 11. I learn more and more about myself and him every day we are married. Some of these learnings are positive. Some are negative. But they are always revealing as we continue to grow and evolve in our own individual ways. And as with any revelation—be it positive or negative—of who we are and who we’re becoming it is not always easy to swallow. I am not the same person I was when we met and I was 22 and he 29. In a relationship, especially in marriage, it is necessary that people grow together or you inevitably grow apart.

Divorce is always an option in marriage even if you don’t think it at the time you say, “I do.” Our point and click culture has made it easily attainable with online divorces advertised across the internet. However, some couples, like the Smiths, choose to not go that route. They find new ways to make their lives and their relationship work for reasons we can only speculate on. We can armchair quarterback what we think is happening inside any marriage, relationship, or household that is in the public eye but the truth of the matter is we don’t know and we’ll never know because we’re not involved.

Since the interviews aired I have seen a range of responses from influencers, average joes, cultural critics, therapists, lawyers and more about who was wrong and who was right in the entanglement. I am not here to discuss whether Jada Pinkett-Smith’s behavior was predatory or if she was trauma-bonded with someone other than her husband in the most intimate of ways. I’m not here to pick over the allusion and insinuation of possible indiscretion on the part of Will Smith and how that may have driven Jada into the arms of August Alsina. It especially does not matter if we’re still not getting the full story from the high-profile power couple as it has been well noted that August Alsina appeared on an early episode of Red Table Talk to discuss his substance abuse issues. No one will ever know the full story of what goes on in a marriage aside from the two people within it, and even their first hand knowledge is biased and one-sided.

Every person in a relationship — marriage or otherwise — finds ways to cope when the relationship is failing or find a way to make amends. Some people cheat. Some people eat. Some people retreat into themselves until silence settles on the house and you’re looking around and you don’t know how to cross the bridge back to the other side where love used to reside. No marriage is immune to hardship and bouts of unhappiness — even those we consider “good” marriages (Niecy Nash’s bombshell of a divorce showed us that) go through some level of drama after any length of time that may make you question whether or not you should be married in the first place. Is it worth staying? Is it easier to leave?

It’s hard to stay. It’s hard to leave. Marriage tests everything in you: your pride, your ego, your ability to compromise, your willingness to sacrifice, your capacity to put someone else’s needs, wants, feelings, and desires ahead of your own, and so much more. These aspects are some of the most beautiful parts of marriage when you can feel safe enough to surrender your whole self to someone else and know they won’t let you down, hurt, or harm you. However, this beauty can easily transform into a nightmare if one person feels like they’re giving more than the other, sacrificing and compromising more, not being heard, being misunderstood. Surrender is reneged and defenses are mounted in the name of self-preservation. No one willingly lies down to be someone else’s doormat. No one signs a marriage license expecting to be broken in the end.

Marriage is work. The Institute for Divorce Financial Analysts shows that the leading cause of divorce is basic incompatibility. Infidelity ranks second and financial woes comes in third. People who have been in a relationship, gotten engaged, and have taken the time to plan a wedding and be married don’t just become incompatible overnight. Yes, there are some who may have always been incompatible and are only realizing their mismatch in the midst of the trials that marriage can bring. However, what I believe is much more likely is that the little work required to make a marriage successful: communication, understanding, empathy, intimacy (physically and emotionally) is not tended to as it was in the beginning of the relationship when like was new and lust was confused for love. When you’re passionate about something or someone there’s nothing you won’t do, nothing you won’t give to make that passion a successful pursuit. In a relationship the prize for that pursuit is marriage. But what happens when passion wanes? When you become comfortable? Or uncomfortable? You still have to decide whether or not life with the person you’ve chosen to vow “’til death do us part” is still worth living together.

For The Smiths, they have redefined their marriage as a life partnership. It seems to mean that they will be legally married until death but whether or not they are technically together may depend on the year, date, and time the question is posed. Their apparent arrangement is not new. People stay legally married for a myriad of reasons when they are unhappy: money, children, convenience. Everyone’s choice is different. Just like we all have a choice in whether we have a “good marriage” or a “bad marriage” and only we can define what that means.

For me, I am a product of divorce. I’ve experienced first hand the damage that can do to children. As a wife and a mother I am concerned about the relationship my son witnesses between his father and I. I want him to know what it is to be healthy, whole, and happy even when difficulties and challenges present themselves. I know that no day, week, month, or year is guaranteed in my marriage. It takes work. Work I may be willing to do that others are not. Everybody has a different breaking point. Everyone’s non-negotiable varies. I think what we find most often in marriage is that each person tests the limits of elasticity and sometimes you bounce back, sometimes you break, pick up the pieces, and put the relationship back together, and sometimes you let the dust settle on those broken pieces and walk away.

Marriage is what we make it and whom we make it with. As an author it is a topic I’m intrigued by and explore endlessly in my novels. I am also drawn to narratives—real or fiction—that explore the layers, depths, and complexities of marriage. As one author described marriage in a conversation between characters, “everyone is in an individual relationship, but perceives it as a group effort.”

That group effort is the ultimate entanglement. It is the reason books like Tayari Jones’ An American Marriage become bestsellers and spark debate for years. It is the reason why rom-coms are made and fairytales never explore what comes after happily ever after. As married couples we’re all trying to figure out ways around the varying degrees of complexity and no one’s full proof process works for everyone. The Will-Jada-August entanglement may be one couple’s breaking point and another couple’s point of rebound and renewal.

Will and Jada’s tongue-in-cheek Bad Boys esque closing of their Red Table Talk was indicative of where they are now. Marriage mirrors life in that it is a journey and not a destination. A point we should all be well to remember as we watch and listen to celebrities, friends, and family share the most vulnerable parts of their lives with us, be they married for a reason, a season or a lifetime.

Launch Gallery: All the Longest Celebrity Marriages That Defied the Hollywood Odds

Wed Jul 22 , 2020
WASHINGTON HEIGHTS, NY — The Word Up: Community Bookshop in Washington Heights is getting aid in its battle against the financial hardships that have come along with the coronavirus pandemic. On Wednesday, the Humanities New York (HNY) organization, which commits itself to strengthening civil society and the bonds of community, […] 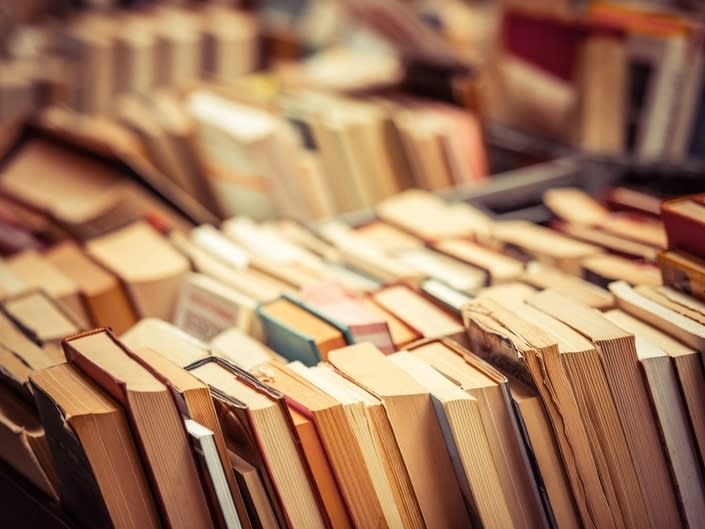