(Reuters) – Since Myanmar shut off the internet in two states a year ago, lawyer Oo Twan Hla, who was once able to check online when his cases were scheduled, said he must now travel through a war zone to read a signboard.

An aspiring medic, in a community largely barred from accessing healthcare, can no longer search the web for remedies to help sick neighbours.

The government-ordered shutdown in two of Myanmar’s poorest states – Rakhine and neighbouring Chin – home to about a million people, is a year old on Sunday.

Justified on emergency grounds amid a growing insurgency, it is the longest internet blackout in the world, rights groups say.

From traders losing business to villagers forced to make risky trips to send messages, they described an information freeze that has damaged the economy and left them in the dark about the conflict and the novel coronavirus.

“It’s like we lost our sight,” said Ray Than Naddy, 22, from Buthidaung, one of eight townships affected.

After the internet was switched off, she said, she had to close her online shop, losing income that paid for her brother’s schooling.

Authorities say the shutdown will remain at least until Aug. 1 and will only be lifted when security improves.

Myo Swe, director-general at the Ministry of Transport and Communications, which ordered the blackout, said it was for security.

Rakhine is the region from which hundreds of thousands of Rohingya Muslims fled in 2017 after a military crackdown that the government said was ordered in response to attacks by Rohingya insurgents.

But since then, a new conflict has blown up between the army and rebels from the largely Buddhist Rakhine ethnic group, a majority in the state.

Hundreds of thousands of Rohingya remain confined to camps and villages, subjected to restrictions on movement and access to healthcare.

The aspiring medic, a Rohingya man in his twenties who declined to be identified, said he had been learning English on YouTube and giving people medical advice through videos, but was no longer able to.

“It would be very easy if I got the internet,” he said.

Residents said it was harder to get information about fighting between the military and the Arakan Army insurgents, who seek greater autonomy for the state, and to determine if roads were safe.

But the fighting has not slowed.

More people have been killed and injured this year than in 2019, according to the United Nations. Hundreds of thousands have been displaced and dozens killed.

The military denies abuses and accuses insurgents of using villagers as human shields – an accusation the insurgents say is not true. A military spokesman did not respond to requests for comment.

The government introduced telecoms reforms in 2014, allowing Norway’s Telenor Group and Ooredoo from Qatar to operate. The price of SIM cards quickly dropped from $200 to as little as $2, bringing millions of people online.

Few people use banks but more than 11 million people use a digital payments service called Wave Money, a joint venture between Telenor and Myanmar’s Yoma.

Activists have urged mobile operators to challenge the law that justifies the blackout but both Telenor and Ooredoo have said they must obey it, though they have participated in discussions about building a coalition to propose amendments to the law.

Telenor Myanmar said in an April letter to activists seen by Reuters it believed if it disobeyed the law and lost its license, the impact would be even worse.

Cathrine Stang Lund, a company spokeswoman, said it had done an assessment that found the shutdown had an impact on rights principles, including access to information and freedom of speech.

“We have been in continuous dialogue with the authorities to end the shutdown, and look forward to be allowed to resume Internet services on Aug. 1,” she said.

Ooredoo Myanmar did not respond to a request for comment.

Businesswoman Ray Than Naddy said it felt like people were being penalised for the insurgency.

“Please don’t punish us civilians for what’s going on,” she said.

How to Shop Online Safely During the Pandemic

Fri Jun 19 , 2020
Consumer Reports has no financial relationship with advertisers on this site. Even as stores reopen in many parts of the country, people are still shopping online more than ever. And that includes using new sites set up by their favorite small businesses attempting to stay afloat through perilous economic times. […] 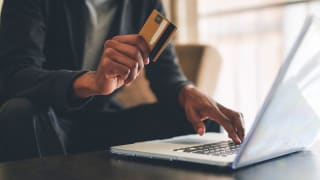