While many businesses have suffered terribly during the lockdown, a select few have blossomed. Trade is booming at Zoom, Amazon and Ocado. Manufacturers of jigsaw puzzles, home hair-dye kids and hand sanitiser have never had it so good. But might television be another sector to come out on top?

It’s not quite Covid-proof, admittedly, but so far TV has coped surprisingly well with the new normal. Indeed, I’d argue that the past few months of viewing have been better than they would have been under usual circumstances. Forced to take stock and strip back, TV has learnt to be simple and fun again. It could even be left in better shape for the future.

Of course, it’s highly regrettable how hundreds of productions were temporarily shut down. Exciting new series and returning favourites have been furloughed. Jobs, freelance work and money have been lost. All these consequences are deeply unfortunate. However, it’s a sign of the robust rude health of our TV industry that so far, its broadcast output hasn’t suffered too badly.

In many ways, the past three months of programming have been hugely, strangely enjoyable. Lockdown has brought people back to linear TV – even younger viewers who, it was widely thought, had abandoned it for good in favour of their phone, tablet and laptop screens. We’ve rediscovered the joy of communal viewing and TV has duly risen to the challenge.

Some of the special lockdown commissions have worked wonderfully well. The revival of Alan Bennett’s Talking Heads monologues, which arrived on the BBC this week, offer a killer combination of pin-sharp writing and pitch-perfect performances. Other hastily assembled, socially distanced creations – ITV’s Isolation Stories and BBC comedy Staged – were more hit and miss but still had their moments.

The BBC arts department cobbled together an “at home” version of Later… With Jools Holland, which has exploited the music stalwart’s enviable archive to great effect, and Kermode & Mayo’s Home Entertainment Service on BBC Four, which is a little like radio on the TV but no less stimulating for it. I’ve enjoyed both far more than I would a normal series of Later (cue Holland playing honky-tonk piano) or a regular arts discussion programme (cue chin-stroking about an exhibition or play I’ll never see).

This weekend’s Glastonbury coverage – hits ’n’ highlights only, without the traditional moans about a giant BBC jolly at licence fee payers’ expense – were another treat. Whether it was Beyoncé or Bowie, they had viewers sofa-dancing and sharing misty-eyed Worthy Farm memories on social media.

Over on Channel 4, Grayson’s Art Club was a surprise treat that might have legs long after the pandemic has passed. It might have been rough and ready but it had real spirit and has arguably been one of the best new shows of the year so far. Steph McGovern launched her lunchtime talk show from her kitchen, with the nosiness factor merely adding to its appeal. Jamie Oliver’s Keep Cooking & Carry On was also produced with impressive speed when lockdown was announced and food shortages were a worry.

If the bish-bash-boshing Essex boy became Britain’s chef, Monty Don became the nation’s horticulturalist, helming Gardeners’ World solo and making it more comforting than ever. Long shots of Don lovingly tending his garden were almost hypnotically soothing. Gogglebox also came into its own, providing a window to the outside world – or at least, to other people’s inside worlds – and notched its best ever numbers.

Fine programmes that might have been otherwise overlooked have been promoted to bigger channels and more prominent slots. The Great British Sewing Bee was shunted up from BBC Two to BBC One and found a whole new fanbase in the process. Daytime favourite The Repair Shop has proved such a hit in primetime that it’s deservedly staying there.

Communal viewing has been revived, with blockbuster audiences for a pair of fact-based dramas. Both ITV romp Quiz (about the “Coughing Major” scandal) and BBC One’s grittier The Salisbury Poisoning (about the Novichok attack) were cleverly stripped across three consecutive nights and became “event TV” in a way that’s all too rare nowadays.

Normal People became the most eagerly dissected show since Fleabag, breaking iPlayer records in the process, as its acute portrayal of first love struck chords in viewers far older than its ostensibly millennial target market. Netflix docuseries The Tiger King and The Last Dance have also been gleefully picked over, with everyone watching them at roughly the same for a change.

We crave such connections, as evidenced by the weekly Clap For Carers or Joe Wicks’ workouts nearly breaking the internet. No medium can provide mass shared moments as well as TV. Even the daily government briefings have been putting bums on sofas. That particular “series” – attracting huge ratings for the 5pm slot – has now come to an end but don’t be surprised if a second spike leads to a “recommission”.

With more hours to fill and fewer entertainment options, viewers have been forced to look beyond their usual repertoires and are reaping the rewards – discovering the joys of BBC Four, Sky Arts, Walter Presents, Yesterday channel or Talking Pictures TV. We’re scouring catch-up and streaming services for treasures we missed. Others have been motivated to seek out streamed theatre, live music and stand-up comedy for that night-out feeling while still staying home.

Putting a pause on some of our soap operas and reality contests was a body-blow to the broadcasters who build their rosters around them. Yet the enforced hiatus will give their production teams time to take a breather and make improvements – much needed in the cases of The Apprentice, The X Factor and Love Island, which should all come back stronger for it next year.

Soaps recently restarted filming, with a reduced cast shooting simpler scenes – which were always their strength, rather than the overblown crashes and killings of recent years.

To fill their scarily empty schedules, channels have been forced to plunder the archives. Rather than barrel-scraping desperate measures, however, some of those nostalgic clip shows and reruns have been surprise pleasures.

Sports fans have savoured classic World Cup clashes or tense Test matches. Freed from the constraints of the usual Premier League fixture list, Match Of The Day: Top Tens – which found Gary Lineker, Alan Shearer and Ian Wright squabbling over Zoom – was warm and freewheeling. This week it’s tennis’ turn in the spotlight, as the BBC tries to compensate for the loss of Wimbledon. Pass the Pimm’s and wooden racquets.

Channel 4 has given a welcome encore to the funniest episodes of Celebrity Bake Off. Meanwhile, Big Brother: Best Shows Ever on E4 has proved more of a talking point than the defunct reality franchise itself during its latter years – even if much of it is viewers arguing on social media about which episodes should have been selected above the ones that were.

Soap addicts have relished the chance to see vintage EastEnders and Coronation Street showdowns. There have been curtain calls for weightier dramas, too – from whodunits Broadchurch and Little Boy Blue getting another airing on ITV, to Pride & Prejudice (that Mr Darcy lake scene still caused flutters) and David Nicholls’ underrated adaptation of Tess Of The D’Urbervilles on BBC Four. Channel 4’s Yewree-inspired drama National Treasure – which won four BAFTAs but was criminally under-watched – gets a welcome rerun next week.

Sure, there are too many repeats on-air and we know how people love to moan about those. When ITV’s director of television, Kevin Lygo, was recently asked what viewers would be watching  in early 2021, he deadpanned in reply: “A repeat of Midsomer Murders.” But considering all the constraints, TV has thrived in adversity, with many productions pulling off miracles just to be half-decent. It has accompanied us through lockdown, providing genuine glimmers of hope amid the gloom.

Other, older art forms have suffered far, far worse. Theatres and cinemas have stood empty. Festivals have been cancelled or moved online. The live arts have suffered a devastating blow from which it will take a worryingly long time to recover. We should count our blessings and take bright spots where we can find them. Watching the telly has been one of them.

Recent months have also been a reminder that stripped-back shows are often superior to big-budget, bells-and -whistles affairs. That drama, comedy and soap opera can simply comprise two people having a conversation. That fascinating factual programming needs knowledgeable people talking to a camera and little else. There’s been something pleasingly old-fashioned about Covid-era TV, something theatrical, plucky and public-serving. It’s been all the better for it.

Media business pundits might argue that once the ratings boost for terrestrial broadcasters wears off, the advertising market struggles to rebound and yawning holes in the schedules continue, it’s streaming services – Netflix, Amazon, YouTube, Disney, Apple, those plucky underdogs – which will prove the longer term winners.

However, 2021 could yet become a classic year for mainstream TV. Delayed dramas and comedies will arrive thick and fast. Sporting events deferred from this year will make it a bumper summer. Broadcasters have learned lessons, returned to their roots and could return reinvigorated. Think of lockdown as a training camp before the triumphant comeback.

Even when TV is stretched this thinly, it has provided moments of togetherness and community in isolated times. Many millions have relied on that magical screen in the corner of the sitting room as a source of escapism and light relief during a dark period. Coronavirus aside, long may that continue.

Do you think lockdown is TV’s blessing in disguise? What have you been watching? Tell us in the comments section below.

Mon Jun 29 , 2020
“E.T. the Extra-Terrestrial” was originally released in 1982. Universal Studios Sometimes you just want to escape your real life and get immersed in the futuristic, mind-bending worlds of science fiction. Luckily, Netflix has you covered. The streaming site has a strong selection of sci-fi movies to choose from. Standouts include […] 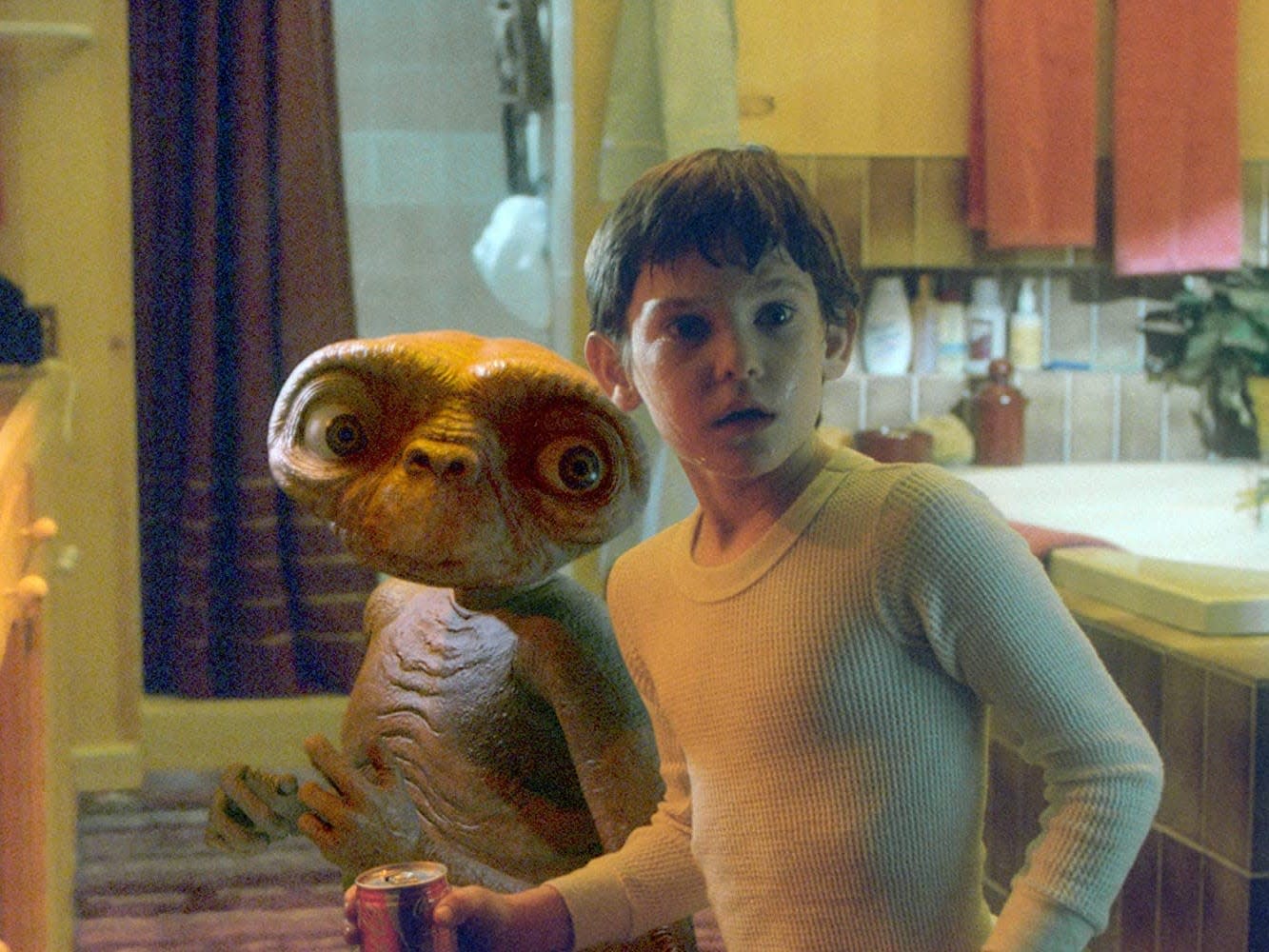