My headaches appeared out of nowhere. For several weeks in 2006, I couldn’t do my job as a journalist without feeling a nagging pain directly behind my right eye. My co-worker was worried, but I wasn’t. We were reporters working long hours, and I attributed my ailment to eyestrain from staring at the computer every day.

“Just go to the doctor,” she said.

I was only 26 but decided to visit my eye doctor’s office in New York City just to be sure. When I mentioned the headaches, he asked me to cover my left eye so he could test my right one.

“Can you see what color this is?” he asked.

I squinted with my right eye. I couldn’t. My left eye had been compensating for my weak one, and I hadn’t even realized it.

“Your optic nerve is swollen,” he replied. “I want you to see a neuro-ophthalmologist.”

I had planned on getting my hair cut after my appointment that day, and didn’t want to be late. “When?”

“You need to go right now,” he said. “I’ll get you the appointment.”

The urgency in his tone worried me, and I knew it had to be serious. That afternoon, a neuro-ophthalmologist confirmed that I had optic neuritis ― a symptom that can be associated with the onset of multiple sclerosis. I had films taken of my brain and spinal cord in an MRI device, where there was only an inch of space between my nose and the machine. I tried to think about anything but my doctor’s suspicion that I had either a brain tumor or multiple sclerosis. Every fidget I made messed up the films.

“You need to stay still,” a nurse said. “Or we’ll have to start over.”

But that’s what I wanted — to start over. In a day, everything changed. I took a cab downtown and took another one back uptown a different person, with black-and-white photographs of my brain that showed lesions, or tiny white splotches, as evidence of multiple sclerosis.

I received my diagnosis a couple weeks before my best friend got married, and it felt hard to celebrate, not knowing what was ahead of me. Would I ever find someone to marry me, despite my illness?

In all my maneuvering around New York, I realized I didn’t know anything about multiple sclerosis and I didn’t know a single person affected by it. I certainly hadn’t ever thought I would have to give myself shots to slow the progression of the disease.

“Do you have someone who can help you? A boyfriend maybe?” a nurse asked me in an examination room, while trying to help me practice injections on a squishy ball.

I didn’t have the heart to tell her that poking myself with a really long needle was probably going to be much easier than dating in New York.

I received my diagnosis a couple weeks before my best friend got married, and it felt hard to celebrate, not knowing what was ahead of me. Would I ever find someone to marry me, despite my illness? I have always considered myself an oversharer, but for the first time, I didn’t want to tell anyone what was going on, out of fear they would judge me. Those who I did confide in usually had the same response: “But you don’t look sick.” No one could really believe it. The illness didn’t run in my family, and I had been healthy all my life. It was unexplainable.

My doctor at the time advised me to go out and try to enjoy my life, to pretend I was just like other 26-year-old women.

“A little denial will do you good,” he said.

But it was hard to deny my illness when I had to plan my day around my injections. I couldn’t go out and drink at bars and irresponsibly tumble into a cab with cute boys with my friends when I had to go home and give myself a shot.

All my life, I dreamed of moving to New York, but after my diagnosis, it felt like I was spending more time in doctors’ offices than out enjoying the city. Every time I asked my doctor for a prognosis, he told me that multiple sclerosis progresses differently for everyone. Some people could have a symptom and recover completely; others could develop paralysis. There was no way to know. As I sat in waiting rooms surrounded by men and women in wheelchairs, I worried that I was looking at my future.

My doctor at the time advised me to go out and try to enjoy my life, and to pretend I was just like other 26-year-old women. But it was hard to deny my illness when I had to plan my day around my injections.

I never thought I’d learn how to inject myself, but when I finally did, after a few weeks of practice, I felt a sense of empowerment. I pinched a fold of skin, took a deep breath and pushed the needle into my body. The shots, which I had to do several times a week, made me feel like I had control over the situation, even though my life had changed so quickly.

Multiple sclerosis affects women four times more often than men, and many women are young when they’re diagnosed. As someone who enjoyed traveling, I always had to fly with my shots and a doctor’s note (which prompted many bag checks from curious airport security officials). Before my diagnosis, I rarely needed bloodwork, but afterward I got it all the time to check my levels of vitamin D; evidence suggests that lower levels are associated with increased risk of multiple sclerosis. I had yearly MRI scans to monitor disease progression, and every time a scan came back without any new activity, I treated myself to dinner at my favorite Italian restaurant on the Lower East Side to celebrate.

For someone single and in her 20s, as I was, this made dating tricky. I never told men with whom I went on casual dates. I didn’t need to. My illness was well-controlled, and I didn’t look sick. I did yoga every day and could eat my weight in carbohydrates with reckless abandon. It never occurred to me that I might actually have a serious relationship at some point and need to clue him in.

Finally, when I was 29, three years after being diagnosed, I met a man who I had fallen in love with and was sure I was going to marry. I tried to keep the secret of my illness under wraps, and he was clueless that anything was even wrong with my health. I would inject myself in the bathroom at his apartment on the sly, sometimes wondering what on earth he would think if he found my empty syringes by accident in my purse. My illness hadn’t gotten worse, and it would be impossible to know that anything was wrong with me.

When I fell in love at 29, I tried to keep the secret of my illness under wraps, and he was clueless that anything was wrong with my health. I would even inject myself in the bathroom at his apartment on the sly.

After a few months of dating, I decided to tell him one night when we were out to dinner. I had been putting off telling him, but that’s the thing about secrets ― the more you ignore them, the louder they get.

“I have something to tell you,” I said, waiting until he had his second glass of wine.

“I have multiple sclerosis,” I said. “I’ve been dealing with it for several years now, and I’m doing fine.”

I squinted across the table, studying his face for any sign of judgment. I waited for the gasp of surprise that I was so used to from other people. I hoped I wouldn’t scare him off or change the opinion he already had of me. I wanted to control the narrative but couldn’t. With my illness, there was no way to simplify it. My immune system was attacking the nerves in my brain and spinal cord. Unless someone found a cure, I’d be dealing with it for the rest of my life.

I didn’t look sick, but there was always the chance that would change. It was the reason I avoided support groups; it was so hard to see people who had it worse and not compare myself to them. And if my boyfriend had gone online and done a basic Google search about multiple sclerosis, seeing phrases like “vision loss” and “problems with mood swings or sexual function” could have scared him off fast.

His calm response put me at ease, even though I couldn’t give him an idea of what my future with the disease looked like. Hopefully, I’d keep taking medication and stay asymptomatic, but I couldn’t be sure. Even if I forgot about my illness for a day or two, it was always there, hovering in the background. We shared a taxi back to his apartment and slept in the next morning, tucked in under his warm comforter, as if it were any other night.

With my illness, there was no way to simplify it. My immune system was attacking the nerves in my brain and spinal cord. Unless someone found a cure, I’d be dealing with it for the rest of my life.

How hard it had been to make myself vulnerable to him, to share something that I hated to reveal but had to live with. And yet it didn’t really seem to bother him at all. His acceptance made me more willing to share the story of my illness with other people.

That was a decade ago. Now, I am 40, and it’s hard to imagine that I have been living with multiple sclerosis for 14 years. My illness has mostly hovered in the background, thanks to regular checkups with my neurologist and naturopathic physician, who have helped me manage my illness with new medications, vitamins and a healthy lifestyle to minimize stress. In 14 years, I have had only one relapse, which was caused by an injury to my hand that set off an immune response. I had temporary numbness in my legs, but fortunately, with a change in my medication, I was able to recover completely.

When I think back to my diagnosis, I remember being so surprised by how fast life can change. Now I see the flip side of that. Life can normalize just as quickly. Multiple sclerosis doesn’t affect everyone, but none of us are immune to the ups and downs of life. My illness has taught me how to surrender to periods of chaos and, in turn, appreciate the wonderful stretches of calm.

Recently, when I went to get my medication at the hospital, my favorite nurse greeted me with a smile. I did what I always do: extend an arm to help her find a vein. Like usual, she knew right where to find it, and in no time at all I was back out in the world living my life. To many people, this doesn’t sound like a normal day. But to me, it is.

Have a compelling first-person story or experience you want to share? Send your story description to [email protected]

Fri Jun 19 , 2020
(Reuters) – Since Myanmar shut off the internet in two states a year ago, lawyer Oo Twan Hla, who was once able to check online when his cases were scheduled, said he must now travel through a war zone to read a signboard. An aspiring medic, in a community largely […] 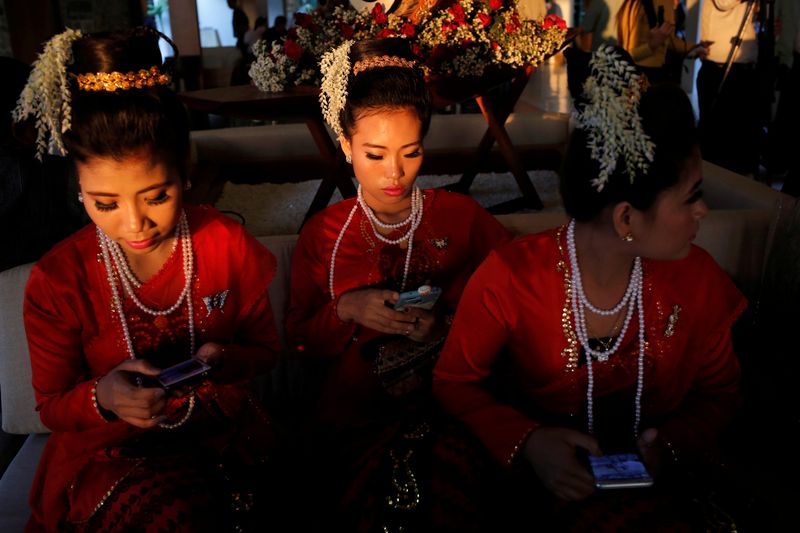