The coronavirus pandemic has forced even those most resistant to digital change to give ground, and e-commerce is burgeoning like never before.

Trapped at home, or faced with hours waiting only to find empty shelves, more people than ever are turning to online grocery shopping.

“There is pretty strong evidence that that is here to stay,” Luke Jensen, executive director of the Ocado Group and CEO of Ocado Solutions, told Business Insider.

Ocado is a household name in British cities, but its business is largely unknown elsewhere.

The company’s work is twofold. There is Ocado Retail, which sells groceries and other supermarket products to consumers online. The second aspect is Ocado Solutions, which provides technology to the online operations of major global supermarkets like Kroger in the US, Sobeys in Canada, and Waitrose in the UK.

The company, which was founded in 2002, does not expect to turn a profit until 2024. It has high running costs, a sky-high share price, and a price-to-earnings ratio to match.

Ocado first set out as an online grocer, boxing and delivering orders for Waitrose, the UK’s deluxe supermarket. But it has now established itself as the guardian of online grocery delivery in its own right.

It now has operations in the US, Canada, Britain, Sweden, France, and Japan.

The pandemic has wreaked havoc on many industries, and businesses around the world are struggling to stay afloat. National economies are sliding into recession, as global unemployment rates are inching upward.

But Ocado, and the grocery sector at large, have found themselves booming in light of astronomical demand.

The future of food is online

The pandemic has left companies around the world reassessing how the habits of their customers will change. Nowhere has this been more apparent than in grocery shopping.

“When you see people try grocery online for the first time, there’s a high proportion of people who stick with it and make it part of their repertoire,” Jensen said.

There are many signs that online grocery shopping is growing.

Online grocery sales in the US boomed to $7 billion in May 2020, up from $5.3 billion in April, according to a Brick Meets Click/Mercatus Grocery Shopping survey. For reference, this number was $1.2 billion in August 2019.

A 2018 Nielsen study also predicted that 70% of US consumers would be grocery shopping online by 2024.

Before the pandemic, online grocery shopping made up only 4% of the US market, but that is set to change.

“The US has seen an enormous boom,” Jensen told Business Insider. “We expect a lot of that to stick.”

Back in the UK — where, pre-pandemic, 7% of grocery shopping was online — Ocado said in May that “a simply staggering amount of traffic” meant they had to turn away new customers.

“They could be doing even better than they are because they deliberately limited their growth,” Matt Botham, a strategic insight director at the Kantar data consultancy, told Business Insider.

The elevated demand for online grocery shopping won’t last forever. Shops will reopen, and constraints on freedom of movement will end.

But what is expected to remain — and what Ocado is betting its bottom dollar on — is the knowledge that online grocery shopping is possible, and may even be preferable.

‘The share price is what it is, but we’re not going to … go all Elon Musk’

Daniel Coatsworth, the editor of the Shares financial-news magazine, also told Business Insider: “Any grocery company with either an inferior service, or without one at all, will be seriously looking at how they can up their game. And that’s where Ocado’s strengths lie.”

“It’s easy to see why Ocado has done so well on the stock market this year.”

But as a result of Ocado’s extraordinary rise, some wonder whether the company is overvalued.

Ocado’s price-to-earnings ratio — how many years of annual earnings it would take to make up its valuation — is way higher than its competitors, a common trait of tech stocks.

“The share price is what it is, but we’re not going to worry about it and go all Elon Musk,” Jensen said, referring to the view taken by the Tesla CEO that investors are overvaluing his company.

“We’re delighted the world is seeing that opportunity, and we’re embracing it vigorously and going after it.

On June 11, Ocado announced it was raising £1 billion ($1.24 billion) from investors to expand its services.

“The opportunity for Ocado is massive in what we do,” Jensen said. “There will then will be opportunities beyond what we do.”

Ocado’s cash cow is not its grocery business, but in its technology.

The company owns hundreds of patents for the machinery and software that power its warehouses, from product-picking robots to item scanners that members of staff can wear on their heads.

This software, and future products, can be leased to supermarkets across the world. That’s where Ocado’s value lies.

“Investors bidding up Ocado’s shares are effectively saying that its services as a provider of solutions to automate online grocery orders will be in greater demand,” Coatsworth said.

“There is merit in the market valuing it as a technology stock rather than as simply a grocer or delivery business.”

The future of online grocery shopping

“At the heart of it all,” Ocado says on its website, “lies our technological know-how and unparalleled IP.”

This stands for intellectual property — one of the most lucrative assets a tech company can own.

Ocado has registered at least 350 patent applications in Europe alone, according to IP law firm Reddie and Grosse.

Half concern “storing articles, individually or in orderly arrangement, in warehouses,” the firm said. Dozens entail “systems and methods … relating to logistics.”

Nowhere has online grocery shopping boom been more apparent than in the US.

Americans weren’t big on online grocery shopping before the pandemic, with it making up just 4% of the total market.

Kroger, the largest US grocer, appears keen to get a head start.

It struck an exclusive partnership with Ocado 2018, and the companies already have plans to develop 20 distribution centers across the country.

They have broken ground on three so far, with the locations of six more confirmed.

Smart warehouses are underway in Monroe, Ohio, where Kroger is a mainstay, and Groveland, Florida, where rivals — Publix and Target — rule the roost.

“We see plenty of evidence that what we will be able to develop with Kroger will be able to push on quite an open door in terms of consumer demand,” Jensen told Business Insider.

But getting Americans to shop for groceries online isn’t as simple as it sounds. There has been a traditional reluctance to purchase fresh food online because people want to see what they are going to put in their mouths before they buy it.

At an Amazon Fresh distribution warehouse in Washington state, a third of bananas were thrown out because each banana had to be perfect to the naked eye, an MIT study found in 2015.

A 2014 Instacart training video seen by Quartz told its fruit pickers to “make sure there are no bruises, no cuts, no mold, it’s not too soft, not too hard, just perfectly ripe.”

And as consulting firm Oliver Wyman wrote in 2019: “Customers resist the idea of having someone else pick fresh food for their family.”

The boom in online shopping during the pandemic could be a flash in the pan, rather than an inflection point for the industry.

Another orthodoxy about online grocery shopping is that the US is just too big to cover with online delivery.

Ocado is less concerned about the challenge, however. Jensen concedes that the US is huge, but said “if you look at the distribution of the population in the US, you have about 75% of the population who live in urban or related-to-urban markets.”

“In that respect the US is not terribly dissimilar from any other geography around the world.”

Worldwide, Ocado has partnered with Kroger in the US, Sobeys in Canada, Aeon in Japan, Waitrose and Marks & Spencer in the UK, Groupe Casino in France, and ICA in Sweden.

In Japan, online grocery sales doubled during its coronavirus lockdown, which is remarkable for a country that obsesses over fresh produce and food presentation.

As Ocado proclaimed in its 2019 report: “We can change the way the world shops.”

Leading the field at the right time

Coatsworth, the editor of Shares magazine, said: “What the market hasn’t priced in is the likelihood of increased competition. If the opportunity is so clear for everyone to see, there will inevitably be other players entering the scene.”

Several competitors already exist, especially in the US.

The main ones are Amazon Fresh and Instacart. Fresh Direct and Shipt, which is owned by Target, are also in the game.

Amazon has tried to get online vegetable and fruit delivery to stick for some years, but with little to no success.

When asked about the company, Jensen said it has been fascinating to watch.

“What’s interesting with Amazon is they’ve been in grocery for over 10 years now and they’ve made multiple attempts at particularly getting into the fresh grocery market, and today their market share remains very, very small,” he said.

“I think what that indicates is not that Amazon is not good at doing stuff, it indicates just how difficult and different grocery is.”

‘We don’t do vanity tech projects’

The Ocado vans that ferry food from warehouses to homes still bear the slogan “the online supermarket,” but the company is essentially a tech company. (It successfully applied to be un-designated as a grocer by the UK’s Competition and Markets Authority in 2019.)

Nowhere has Ocado’s performance as been more apparent than at its warehouses.

Inside these warehouses, known as Customer Fulfilment Centres, cuboid “Bots” whizz back, forth, and side to side on grids known as “The Hive,” depositing supermarket produce from orders.

A 50-item order can be sorted by a bot, which travels through The Hive at a speed of eight meters per second, and is complete in a matter of minutes.

Ocado is also transitioning from a reliance on human produce-pickers to robots.

“As we continue, we will see a greater proportion of the range picked robotically,” said Jensen. He envisions “a tipping point where you get a payback with the cost of a robotic picking station versus the cost of a year of labor.”

“We don’t do vanity tech projects,” Jensen said. “We do projects because they work and they pay back.”

Here’s what an Ocado warehouse in Andover, England, looked like in 2018:

Ocado has also invested in vertical farming, billed as a more sustainable and profitable way of growing vegetables indoors.

He sees Ocado’s warehouses ultimately being built alongside vertical farm facilities, which would dramatically lower costs and speed up deliveries of fruit and vegetables.

Botham, of Kantar, told Business Insider that the days of Ocado being a retailer are long gone.

“They see themselves as a solutions business,” he said. “That’s where they think their money is.”

Keep it simple, Democrats. Job One is making sure Americans can cast votes this fall.

Sun Jul 12 , 2020
Democrats and many others are determined to defeat a toxic president and win governing power to beat back the pandemic, root out institutional racism, and build a robust, equitable economic recovery. Four months out, this all looks possible. Most Americans have never liked Donald Trump or the Republican agenda, and even […] 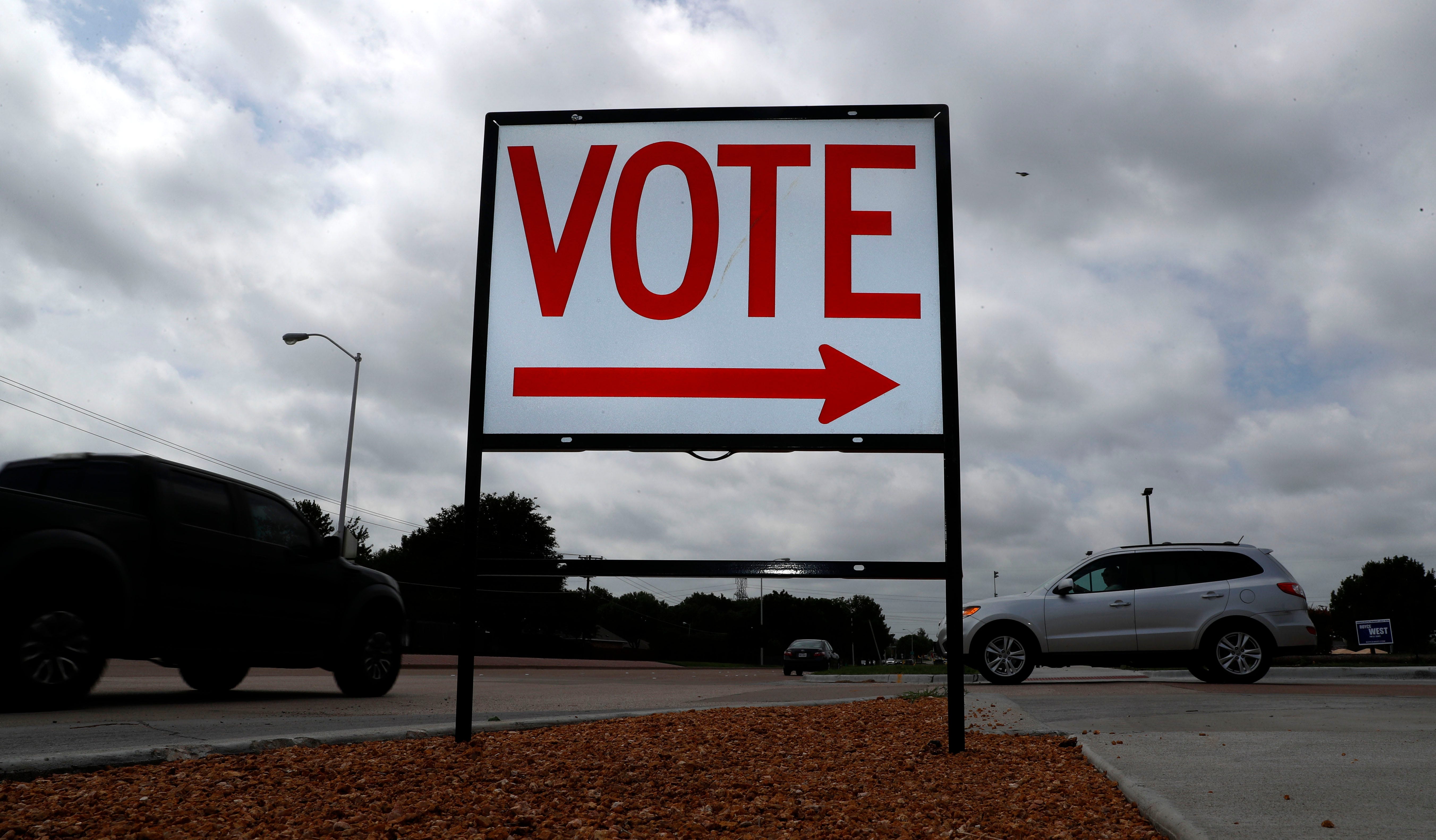