Turn your feeble, innocent 2019 brain on, and try to walk your former self through any of the images you’ve seen in the last few months: deserted streets, politicians in face masks, Black Lives Matter protesters forming historic crowds. It certainly…takes some explaining.

To do just that, museums and cultural institutions around the country have been documenting these quotidian symbols of the coronavirus and activism. At first, these collections centered largely on the artifacts and private moments that symbolized an era of social distancing — face masks, Zoom lessons, lawn party attendees standing six feet apart. Beginning in late May, though, people across the country marched in the streets following the horrific police killing of George Floyd to protest the systemic racism endangering and disenfranchising Black Americans. The protests became part of the overall coronavirus narrative, which had already exposed structural inequalities that left Black Americans more susceptible to COVID-19. Together, coronavirus and the protests painted a portrait of a country gripped with inequality.

Of course, these protests are ongoing, and so is the coronavirus’ spread.

Museums and other cultural institutions are capturing history in the present. They’re deciding what — and who — is important during this historic time. And they’re doing so as America reckons with its response to painful historic markers.

People have toppled Confederate statues, updated flags with Confederate symbols and renamed bands. Critics have long condemned historians for forgetting the oppressed in a rush to memorialize the powerful. Museums aren’t immune from this critique either: With overwhelmingly white leadership within the museum world, many museums have been criticized for erasing people of color from the exhibits they stage, the crowds they draw, or their hiring and payment practices.

To do right in the future, we need to remember the past — and present — accurately. And that’s what museums and cultural institutions are hoping to do right now.

Mashable Composite: Photo by Hester Betlem via the Museum of the City of New York

Mashable Composite: Photo by Mark Brown via the Museum of the City of New York

With much of life effectively shuttered and museums physically closed, collecting artifacts can’t be done in person for the most part, curators point out. Instead, most museums and cultural institutions are remotely engaging in what’s known as rapid response collecting.

Rapid response collecting, in the museum world, refers to the collection of present-day items that will one day serve as historical relics. Because curators can’t collect in person, they’re primarily soliciting digital images of artifacts, with most setting up some kind of online portal for submissions. The specifics of what’s being collected varies slightly from museum to museum, but many are focusing on images of things like masks or protest signs, as well as pictures of scenes emblematic of the current moment.

How materials are collected matters just as much as what is being collected in terms of inclusivity. With this in mind, curators are figuring out how to include the voices of those most impacted by the pandemic in their collecting process.

How this is done depends on a museum’s focus. To get a sense of how and what museums are collecting, Mashable spoke with curators and directors organizing collections at the Smithsonian’s National Museum of African American History and Culture (NMAAHC) and Anacostia Community Museum, the Los Angeles Public Library, the Museum of the City of New York, and the National Women’s History Museum.

The NMAAHC, for instance, reached out to 400 organizations and people it has relationships with to collect materials, which focus on the Black experience in the U.S. Curators are asking people to share stories about their social experiences throughout the pandemic. The stories of Black Americans “over centuries have been ignored or muted,” Bill Pretzer, a curator for the NMAAHC, says, noting that the museum’s very existence addresses this.

Curators have also put together a community curation website, which people register for, in order to collect images of things like Black Lives Matter printed masks, protest signs, written stories, or uploaded journal entries. (Others, like the Los Angeles Public Library and the Anacostia Community Museum, have similar online portals.)

At the Museum of the City of New York, Sean Corcoran, the head of prints and photography for the museum, and his team have added another approach. Using the hashtags #CovidStoriesNYC and #ActivistNY, they’ve asked people to upload pictures on social media, which Corcoran and his team then comb through. For now, select images submitted to #CovidStoriesNYC will be reposted on the museum’s social media channels and its website, while the images submitted to #ActivistNY are being uploaded to the museum’s ongoing (and currently digital) collection of the same name. He’s found, thus far, that using hashtags allows for a broad interpretation for what can be submitted, which he says welcomes a wide variety of voices and stories. (Corcoran estimates 5,000 to 6,000 photos were uploaded in the first two months of #CovidStoriesNYC’s debut.)

Mashable Composite: Photo by Ruben Natal-San Migue via Museum of the City of New York

Because many of the collection methods are digital, broadband gaps can limit who can submit. The Anacostia Community Museum has a hotline that people can call to provide oral histories of their experiences thus far, as a complement to its online submission portal. (Admittedly, Melanie Adams, the museum director, says, the number hasn’t been used much as a collection method.)

At the Los Angeles Public Library, Suzanne Im, the acting senior librarian of digitization and special collections, notes that the team is currently working on ways to collect the perspectives of those without internet access as well. Previously, the library had already found ways to broaden the accessibility of the online submission portal. Initially, the portal was available in Spanish and English. A translation team, however, helped add Japanese, Armenian, Korean, Persian, traditional and simplified Chinese, and Russian versions of the portal to reflect commonly spoken languages within the city.

Other solutions to access issues have also popped up. Rather than collecting individual artifacts, for instance, the National Women’s History Museum is asking for participants to keep journals over a sustained period of time — 30, 60, or 90 or more days, depending on what works for them — in order to compile an intimate account of how women experienced the pandemic. (Like the NMAAHC, the National Women’s History Museum is also reaching out to a coalition of organizations it has worked with before to extend its outreach.)

“The historical narrative in America has been male dominated,” Jennifer Herrera, the vice president of external affairs for the museum, says. “When we do see women in history books, you learn about a few really phenomenal women, but largely [normal] women are left out. The idea that women’s stories would not be told in the story of COVID was literally keeping [the museum’s director] up at night.”

Not all women are able to devote the same amount of time to journaling though, Herrera says.

She points out that essential workers, whose stories the museum especially wants to highlight, probably won’t be able to carve time out of their days to journal. Girls (say, a 7-year-old) might also have difficulty writing every day, but their voices matter to the project too, Herrera maintains. Accordingly, the museum is also providing non-traditional journaling options, like submissions of artwork, poems, or photos. Thus far, Herrera says they’ve seen submissions from people of all walks of life: some who are retired, working from home, or unemployed.

“We want to make sure we’re capturing the voices of women you might never know about; their experience is just as important and valuable,” Herrera says.

Mashable Composite: Photo by Clay Benskin via the Museum of the City of New York

Mashable Composite: Photo by Jieru Chen and Ansel Oommen via the Museum of the City of New York

Outside of collection methods, curators and historians involved with the coronavirus collection initiatives will also be tasked with determining what gets displayed in more permanent collections…eventually.

For now, the basic ethos is the same across museums and cultural institutions collecting coronavirus artifacts: Get everything you can. Considering the boundaries to collection, it makes sense. Down the road, though, should museums host more selective permanent collections, curatorial decisions will also impact who and what gets remembered from this moment.

Some museums are beginning to calibrate what (if anything) will eventually be shown in their physical spaces. The Museum of the City of New York, for instance, is aiming to re-open on July 23 with an outdoor exhibit displaying images collected through #CovidStoriesNYC and #ActivistNY. That said, with news about the virus and its impacts changing on a seemingly daily basis, it’s a conversation that stands to be rewritten in the weeks and months to come.

It’s rare for museums to do this kind of collecting in real time. With an exhibit on, say, the 1918 influenza pandemic or the civil rights movement of the 20th century, the historical moments can seem clearer. With decades (or sometimes centuries) of remove from a given event, curators can more easily suss out the key players, timeline, and outcome, Pretzer from the African American History Museum says.

That’s not to say real-time curation hasn’t been done before. The African American History Museum, for instance, collected artifacts related to the Black Lives Matter movement as it opened in 2016. Knowing that the movement, which began in 2013 with a tweet, was going to be crucial to telling the story of the Black experience in the U.S., museum officials established many of the tactics they’re using now.

“If anything, it’s making us more concerned about the present and the future. ‘How does this relate to today?’ We’re always working with that thought in the back of our heads,” Pretzer says. “We are explicitly going to wait to hear what the stories that come in tell us.”

Mashable Composite: Photo by Philip Desiere via the Museum of the City of New York

Curators are anticipating what questions someone will have 20 years from now about our current moment, Pretzer notes. He was five years old when polio broke out across the U.S., and though he remembers people going to the doctor at the time, he laments not knowing his parents’ private fears and worries. He sees today’s rapid response collecting as a way to provide context. Museum exhibits can make space for major milestones as well as the private moments of regular people.

“We want to make sure no one can miss the importance of this,” he says.

12 legit ways people are getting free money from the government

Thu Jul 16 , 2020
Well yeah, there are scammers who try to steal your personal information and your money with promises of free pots of gold from the government. But there also are many legitimate ways the government can provide you with some cash with no strings attached. You might get some money if […] 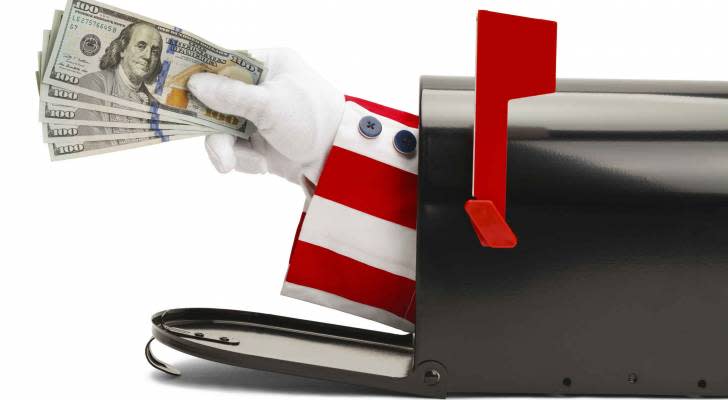