What is the sound of 10 hands clapping?

“America’s Got Talent” fans find out when the NBC summer reality competition returns Tuesday (8 EDT/PDT), with acts performing only for the four judges and host Terry Crews – along with crew members – in an otherwise empty Pasadena Civic Auditorium.

It’s the first episode of Season 15 to reflect the effects of the COVID-19 pandemic, which sidelined entertainment production when “AGT” auditions were being taped in March.

Three months later, “AGT” is one of the first shows back in production, last week filming a Judge Cuts episode (airing July 28) outdoors in Los Angeles. And the season’s live shows are still on tap, starting Aug. 11.

Simon Cowell, a judge and executive producer, found a “silver lining” in having to reconfigure the season during production.

“As bad as it is, you always have to find a solution to get back to work,” he said via email. “I have sympathy for so many people in this situation, but if our show is an example, there is a light at the end of the tunnel. It’s different, but hopefully it will still be as popular.”

“We wanted to figure out how can we do this in a safe manner and for fans to feel like they still get the show they love. We also talked a lot about how this is this show we feel America needs right now. They need to feel like they can escape,” she says.

Cowell and Sofia Vergara described their experience judging under different conditions and Groom and “AGT” executive producers Sam Donnelly and Jason Raff provided USA TODAY exclusive scheduling information and details of how summer’s most-watched show is adjusting in the age of COVID-19.

The season’s first five audition episodes, which have aired, were shot in early March and featured thousands of cheering fans behind the judges.

With about two-thirds of audition filming completed, amid mounting news regarding the severity of coronavirus but before California instituted a lockdown, producers took a cautionary approach, filming the last few days without an audience. The first of the reconfigured audition episodes airs Tuesday.

“There were no masks back then. There was no social distancing. It was right before all of that happened,” Raff says.

Judges Cowell, Vergara and Howie Mandel watched auditions in the auditorium, joined for some by Eric Stonestreet, who was filling in for an ailing Heidi Klum (who later revealed testing negative for COVID-19 and is back for the Judge Cuts).

“We definitely missed the audience and their energy. At the beginning, when I was just getting into the groove of the show, I looked to them a lot to see how they were responding to the acts,” newcomer Vergara said via email. “I know some of the acts were nervous about not performing in front of an audience, but I think they all did really well given the circumstances.”

With some acts eager to get home as COVID-19 restrictions increased, producers gave them the option of auditioning online. In the final audition episode on July 14, “you’ll see a little section when the judges got together digitally and saw a bunch of people” perform, Donnelly says.

Meanwhile, editors worked on piecing the auditions together from home with portable editing bays flown in and distributed hours before California’s lockdown.

Judge Cuts heads to the drive-in

“AGT” has pared down its middle section, the taped performance episodes called Judge Cuts. Last season, 72 acts performed over four episodes of Judge Cuts. This season, there’s just one episode on July 28, with judges considering the fates of 60 acts, advancing some without requiring them to perform again.

Ten bubble acts perform remotely, with five qualifying for the live shows. (To fill the Judge Cuts void, NBC will broadcast a Season 15 best-of-auditions episode on July 21 and a 15th anniversary special on Aug. 4.)

The show took a drive-in movie approach to the episode, staging it outdoors – less conducive to virus spread – in suburban Simi Valley.

“We have the four judges show up separately in cars” that reflect their personalities, Groom says. “They walk on to set and it’s this big, kind of drive-in movie screen. They walk to their (socially distanced) director chairs and watch the performers on a big screen and then speak to them, live from the places that they were, about their performances and whether they were moving forward. It ended up being really inspiring.”

Complicated logistics, with safety being paramount, were involved in pulling off the sole Judge Cuts episode, producers say. The crew was on set just two days after California greenlit production in June, with the show working with health officials and unions to establish safety guidelines that included extensive testing and arranging workers in separate pods to avoid cross-contamination.

“The crew was telling us they felt safer there than when they go to the grocery store,” Raff says.

With more time to adjust to COVID-19 restrictions than “American Idol” and “The Voice,” which aired in the spring, “AGT” was able to have small crews travel for filming. It also sent out priority shipments of recording equipment to accommodate video conferences between the judges and the more than 100 people who make up the acts.

Challenging logistics remained for a show that regularly features choirs with dozens of performers and daredevil acts that require sizable performance space.

“When you have a bunch of pigs that are doing tricks or an aerialist, that’s a little bit harder to do on an iPhone, but I think we came up with a real creative way to do performances that still fit the style of our show,” Raff says.

Cowell was pleased with the resulting Judge Cuts episode.

“It was surreal, like being in a movie,” he wrote. “As we drove onto the lot, everyone is walking around with masks and we go into this room and we’re told what we can do, what we can’t do and I’m thinking this is going to be a tough day. But there was this real buzz of excitement that we were all back together.”

Later this summer, “AGT” plans to expand the number of live shows, to partly compensate for the loss of performances during the abbreviated Judge Cuts round. Forty-four acts will perform over four weeks of live quarterfinals, which start Aug. 11, rather than the 36 who performed over three weeks in previous seasons.

A show producer is always assigned to each “AGT” act, many of whom are in the spotlight for the first time, but it became even more imperative during the pandemic, Donnelly says. Some performers, such as the members of San Diego’s Voices of Our City choir who are homeless, are in especially vulnerable situations.

For the live shows, producers are hoping to have as many acts as possible perform on stage in front of the judges, while relying on a smaller crew than the 300 who usually work on the show. They are considering a variety of potential performing spaces, including the show’s traditional home, Hollywood’s Dolby Theatre, and looking for ways to have an audience component, even if it’s virtual. And plans could change based on a spike in infections or a change in government regulations.

“I think it’s going to be mostly live, maybe a couple pre-taped (performances),” Donnelly says. “We have some larger groups and, with rules and regulations, they might be remote.”

So much can change, Raff advises: “Most of Sam’s and my day is spent in scenarios to come up with solutions to wherever we are when our first live show happens” on Aug. 11. “Thankfully, we have some time to work it out.”

This article originally appeared on USA TODAY: How ‘America’s Got Talent’ is doing live shows this summer: Exclusive

The 10 best and 10 worst celebrity tattoos of all time

Wed Jul 1 , 2020
opinion banner Business Insider Celebrities like Rihanna and Presley Gerber have tattoos. Jon Kopaloff / Getty Images; Presley Gerber/Intstagram Many celebrities use tattoos as a form of self-expression. Some famous figures have ink that’s inspired by their past or pays tribute to a loved one, making the body art very […] 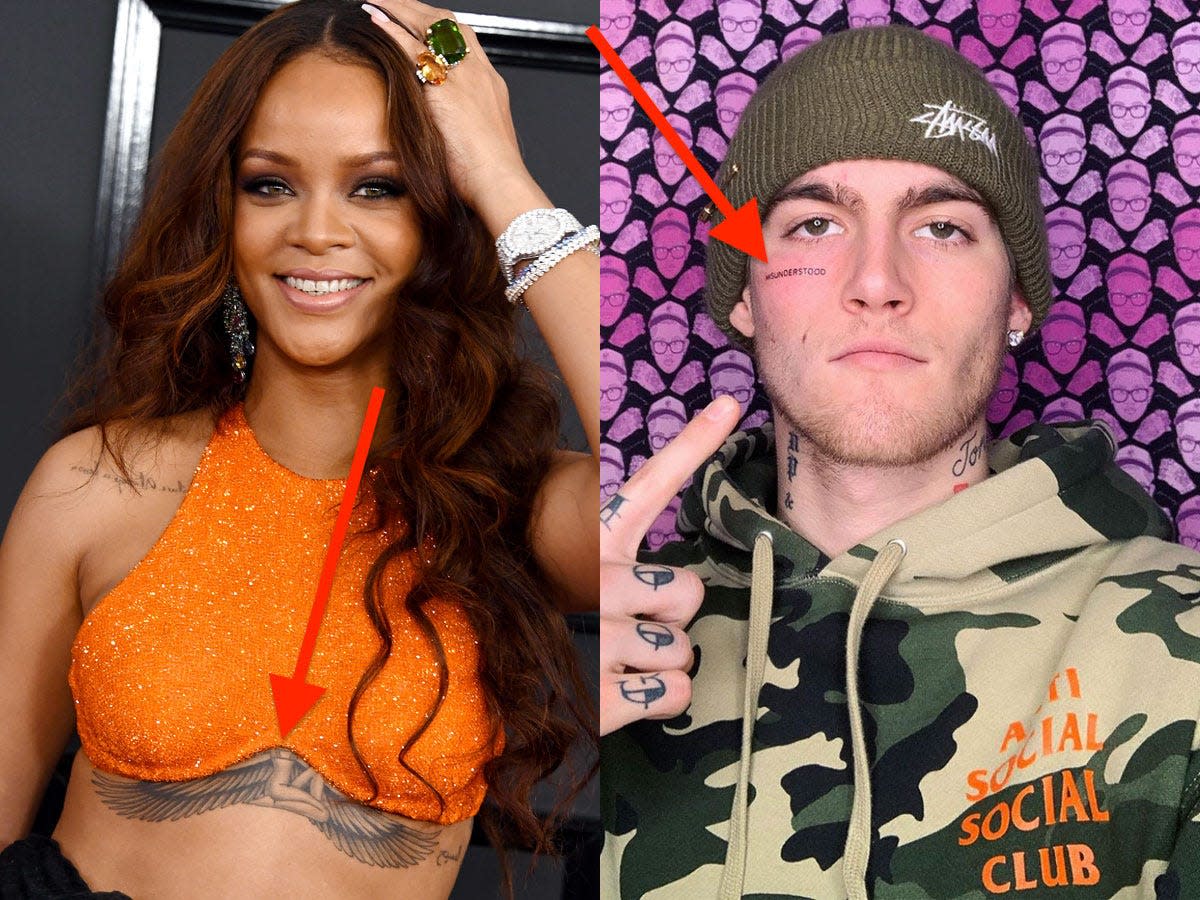