Trust Wasfi Kani to make the best out of Covid-19. The 64-year-old Londoner, director of Grange Park Opera, was, like nearly all arts impresarios, staring down a very scary barrel when she realised she had to cancel her entire summer opera season, held in the grounds of the West Horsley estate in Surrey, back in March – that’s a million and a half pounds’ worth of tickets, to be clear.

And yet, barely three months later, she is the envy of the rest of the classical world as she has debuted her “Found Season” online, so-called because it replaces the “Lost” one. It has been a cornucopia of treats so far, including Bryn Terfel singing from home, “the first opera staged in lockdown”, a very distanced, stripped-back version of Poulenc’s La Voix humaine, and soon we are promised a tantalising orchestral performance too. “Ever-resourceful Grange Park is in the vanguard of the future of live music-making in Britain,” trumpeted one review.

In short its dynamic, witty, innovative programming has left the somewhat staid, one-note initiatives of the likes of Royal Opera and ENO in their wake; it has, in the unlikeliest of circumstances, confirmed Kani as a major player, the arts leader this era needed. And her contribution isn’t over yet.

“I’m just off to donate some convalescent plasma,” she announces down the phone from her home in London in her husky, confiding voice, her tone alternately naughty and brisk. In fact, she has already had the virus itself (“and I know the moment I got it – extraordinary!”), has recovered and so is about to give said plasma, apparently “one of the best, most promising routes” to help fight the infection. And this prompt turnaround from a negative to a positive sums up her relentless trajectory.

Having grown up in east then west London, the child of immigrant Indian parents, she went to Oxford to study music, but then got into computing for 10 years, to do the sensible thing (and make money). However, music proved too strong a passion, and at 30 she returned to it, taking up conducting and then getting into organising country house opera: first Garsington, in the mid-Nineties, then launching Nevill Holt Opera, and two separate versions of Grange Park Opera. She has also set up Pimlico Opera, best known for staging opera productions in prisons, and for giving music lessons in primary schools.

“I never stopped working, even when I had my coronavirus,” she says. “Never stop! That’s my policy!” And so, here we are, into the 15th week of official lockdown, and she has somehow created a programme that has not only been a sweet panacea but frankly, a very canny publicity coup, reaching a whole new audience who may never even have heard of West Horsley, the red-brick pile inherited by Bamber Gascoigne a few years ago and to which she migrated in 2017. She has, typically, managed to hold on to “61 to 70 per cent” of said £1.5 million, and how she did so reveals her modus operandi. She wrote “very personal” emails to every ticket holder, asking them to turn their lost ticket into a donation. She has dubbed her new donors “the Pandemicists” or, for short, “The Pandas”.

And yet, she’s not so romantic as to be totally clueless about cash either. She is an adroit operator who has already built a secure network of donors – GPO doesn’t require any state funding. Hold on: did GPO ever really come close to running out of money in this crisis? “We’re very well organised, so we didn’t,” she purrs knowingly. “We’re very, very well organised.” The idea for the Found Season came to Kani in the bath, a few weeks into lockdown, when she realised she had nothing to do and that Poulenc’s La Voix humaine spoke to our isolated times.

Future highlights include, on July 9, a recital of Richard Strauss’s Metamorphosen, billed as “Britain’s first orchestra concert since lockdown”. It is suitable in two ways, she explains: first, “it’s an elegy for lost culture,” written the day after the bombing of the Vienna Opera House in 1945, and secondly, it’s written for 23 soloists, “so you can represent the piece entirely and faithfully with 23 people spaced out on a massive stage,” she says. “So that just came to me – this would be the perfect piece for this moment.”

La Voix humaine is performed by the soprano Claire Booth, with Christopher Glynn on piano. In an accompanying video interview, Booth is disarmingly frank, pointing out for instance that artists still need to make a livelihood. Kani agrees. “They all got paid,” she promises, although she then adds that the really big fish – Terfel, Simon Keenlyside or Joseph Calleja – did it for free. This seems vital: there has been an awful lot of culture floating around for free in this pandemic, but this is not of much use to those whose incomes have been drastically imperilled.

Kani, by the way, is not overly impressed by the Government’s response to the crisis engulfing the live arts (“crazy” and “pathetic” are a fair sum-up). Making new work was therefore essential: first for the artists, to keep them going financially and emotionally, and second for the new donors too. Most institutions have, in this moment, relied on well-meaning reruns. Was it vital to show that culture can keep going? “It was such a massive shock for everyone,” she ponders. “There we were, all sailing down the river, and then everyone has got stuck in the reeds on the side, haven’t they? And [they] possibly haven’t tried hard enough to struggle out of the reeds, and say: ‘But I can do this!’ ”

And it’s true, after a while, you do wonder how come she was the only one to have such apt ideas, about putting on the Poulenc or the Strauss. She does graciously point out, though, that GPO – with a core staff of 15, and led by her notoriously single-minded vision – has more agility in these circumstances than bigger, more lumbering beasts. She warms to her theme. “We’re lucky – we can duck and dive, and we can say let’s swim out of the reeds, and get on a raft, and go over those rapids…!”

As spring has turned into summer, we have seen various institutions try to struggle out of the reeds. Glyndebourne, for instance, will stage some distanced concerts in July, and even a very reduced opera in August. When asked if she would do the same, Kani, though complimentary, remains fundamentally unsure about the logistics of putting on something live, with an audience, this year. “I don’t know what the law is! If one of the audience, two weeks later, gets corona, do I have to tell everyone else? I want someone to tell me what the answer is!” She thinks the picture will be much clearer in September, which by the way is when ENO, another competitor, will be staging “drive-in opera” at Alexandra Palace, with people able to watch from their car. On this, Kani is uncharacteristically discreet – for about two seconds. “I’m not going to comment on that.” Cue hilarity.

“Well, I don’t know. Why would you want to listen to an opera through a windscreen?” I had heard before that Kani could be temperamental, but I found her quite charming. Lockdown, she says, has been nice because “I spend most of my time having to shovel the s—.” Yet the shovelling seems essential. “I have a permanent existential angst,” she admits. “I just feel I have to be doing something – doing something for other people. It can’t just be about me.” It’s a massive cliché to say that her work is her baby, but then she kind of says it herself. “I think, if I’d had children, my life would have been very different. But because I didn’t… Hard work is a gift. That’s the Indian side of me speaking: hard work is a gift. If you can work with wonderful music, how big a gift is that?” And it sounds as though, in West Horsley, she has finally found the ideal home. She actually once told this paper she wouldn’t mind running somewhere like ENO, but she promises now that “it’s all gone – my ambitions are different now”. She then adds, “You never know! I might have been brilliant at ENO!”

In the meantime, her relationship with the Gascoignes is working well – Bamber is “gorgeous”, says Kani, and she is “very close” to his wife Christina. When they recorded Metamorphosen in June, the Gascoignes, now in their 80s, “came and sat in isolation at the top of theatre, in the attic level, and they weren’t allowed to be near anyone. But it was the first bit of live music that anyone heard in a long time. It was very moving.” Obviously, though, the true question is when live performance can start up there again in full. As said, Kani is not rushing in giddily.

Instead, she has something “very exciting” planned for September, which she refuses to talk about, again for about two seconds. Then she reveals she has commissioned a brand new opera, which will be filmed again for broadcast. “The subject is rather brilliant, and the people involved are rather brilliant,” she promises vampily. Is it on a lockdown theme again? Another dramatic pause.

“Yes!” As for the 2021 season, who knows? She has braced herself for the worst, but naturally plans for the best. “I’m trying to convince my trustees that we have to show ourselves to be very, very strong, and that everything has to be about the 2021 season, however much money we lose.” She is also sanguine: “I think it’ll take a couple of years – three years, four years, five years, six years – to get back to where we were. When I say ‘we’, I mean the whole kind of community of theatre and opera.” But you have to keep plugging away, even in the face of fear. “There’ll be a load of people who’ll be very nervous, assuming there isn’t a vaccine,” she sighs. “Maybe I could set up a sort of convalescent plasma station?”And again, more naughty laughter, but it would be truly daft to put it past her.

Metamorphosen will be streamed on July 9; grangeparkopera.co.uk

Tue Jun 30 , 2020
The UK’s financial watchdog has lifted restrictions on German payments company Wirecard, allowing it to resume payment activities. The Financial Conduct Authority (FCA) imposed restrictions on the company’s UK arm after its collapse last week. Thousands of people could not access their money or make payments through apps as a […] 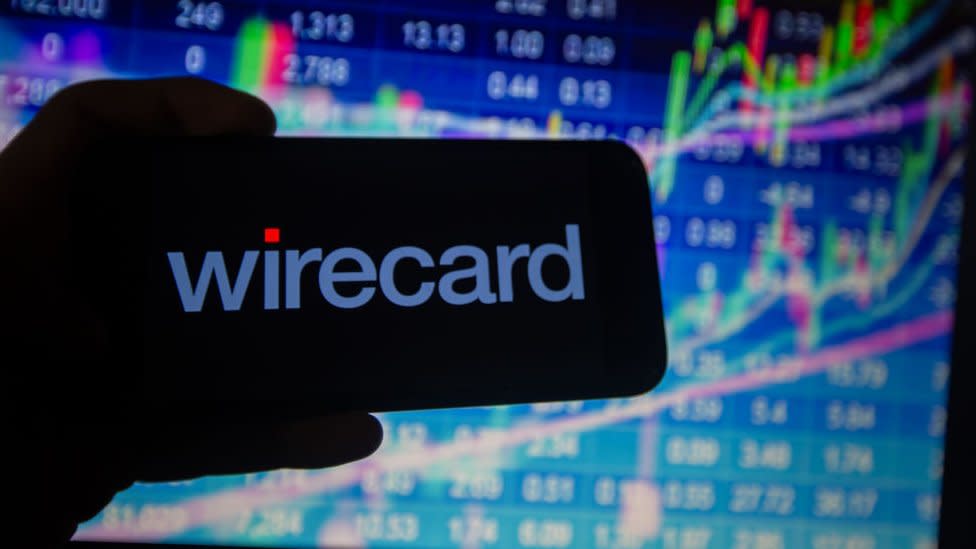