Johannesburg (AFP) – South African student Kholofelo Mohale was over the moon as she moved back into her room at the University of the Witwatersrand after struggling with months of e-learning.

“Wits” shuttered its campus to prevent the spread of COVID-19, and students had to adapt almost overnight to online teaching, streamed lectures and taking tests at home.

Similar steps have been carried out by unversities around the world — more than 100 million students are affected globally, according to some estimates.

But the shift to e-learning has been particularly tough in sub-Saharan Africa, where mobile phones are the primary means of internet access, data connections are often poor and expensive and family homes are crowded.

Mohale, 21, was among a third of the university’s students who have been allowed to return to their dorms in Johannesburg because of such problems.

“We have six people in the house,” said Mohale, whose family shares a two-bedroom home in the township of Alexandra. “With everyone at home doing their thing… you don’t even have a table to sit on.”

Desperate for space and quiet, Mohale resorted to studying at night for her qualification in actuarial science, but still had to battle with internet access.

Today, she looked forward to regaining the wifi connection in her student room.

“Now my worry is that I lost out on two months,” she said. “I’m going to have to make sure that I catch up somehow.”

Teaching is expected to remain online until the end of the academic year.

E-learning has been an even greater challenge in countries outside South Africa, the continent’s most industrial economy.

In Uganda, where classes have been on hold since March, a planned rollout of cyber teaching fell flat after most universities struggled to set up online programmes.

Already some struggling families had made sacrifices to buy smart phones — not a priority at a time when many were worried about their future.

“My parents are poor but they sold part of their seasonal harvest and bought me a smart phone,” said Annet Karabo, a 28-year-old social science student at Uganda Christian University in the central district of Mukono.

In Cameroon, journalism student Floriane Wiltort said her big problem was lack of consistency and teaching materials in the course uploaded by her university, in the southern city of Douala.

“Our institution assured us that online lectures would be organised but this rarely happened,” said Wiltort.

“They uploaded (old) lessons that had been distributed way before school facilities were closed.”

“No provisions were made to allow us to follow lessons remotely,” Nestor said in the capital N’Djamena, where universities remain shut.

He whiles away the time playing Scrabble with his friend.

The side-hustle allowed the 24-year-old to augment his government-provided financial grant, and momentarily escape from his small studio, where he felt “lonely”.

“It has been a difficult period,” said Kouyate.

Felicia Kuagbedzi, spokeswoman for the Association of African Universities, said there were differences across the continent in how educational institutions coped with the pandemic’s many demands.

“At least one positive impact that we are seeing is that some students and lecturers who were not technologically savvy are starting to become so,” Kuagbedzi said from the association’s headquarters in Ghana.

“There should be a will to build on this capacity and use these forms (of teaching) even post the pandemic.”

The head of Uganda’s higher education regulating body, Mary Okwakol, said that adapting to coronavirus had been a “learning curve”.

“We are making steps to ensure that we develop capacity in the universities to be able to conduct e-learning programmes because conventional teaching has proven to be vulnerable,” she told AFP.

But however good an online programme is, it still depends on access to the internet, which in many parts of Africa is poor, especially in rural areas.

In Rwanda, many students went back to their families in the countryside after schools closed.

Because of the poor connection, the education ministry waived fees for online learning and declared that missed coursework could be completed in person when the students were allowed to return.

“We will still have to study in classrooms when school resumes,” 25-year-old law student Isaac Rwapasika complained. “So I think that online learning has been useless for most of us.”

Mon Jun 22 , 2020
Getty Images/iStockphoto Children are developing post-traumatic stress due to the pandemic, a new report by The Childhood Trust has found. The report states that disadvantaged children are particularly vulnerable to experiencing mental health conditions such as depression and anxiety due to social isolation and hunger. The pandemic is also likely […] 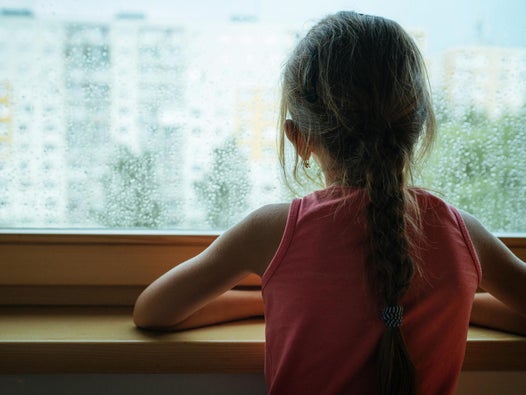