Within the next two weeks, these festivals will make their announcements around programming and exhibition: Cannes will announce a lineup of films, despite its inability to hold a physical event this year; instead, the festival laurels will function as a symbol of curatorial endorsement. July’s Karlovy Vary will take advantage of the Czech Republic’s decision to reopen its theaters earlier this month by unveiling a traveling program of films for smaller audiences around the country. Locarno, which typically welcomes thousands of visitors to the Swiss vacation town in August, will instead hold a competition for international and Swiss film productions that have been halted due to the pandemic. The deadline for that competition arrives next week, which is also when Karlovy Vary plans to announce its traveling lineup.

The pandemic has turned online programming into a hot-button topic, inspiring debates on everything from premiere status to sales prospects. However, these three festivals have largely worked around these conversations in favor of new initiatives.

All three festivals resisted the idea of going virtual, with the exception of their markets. The world’s largest film market, the Marché du Film, will launch an online edition June 22, while Karlovy Vary’s own market will take place online in July. Locarno’s Open Doors program will spotlight conversations surrounding the South Asian film industry in August.

European and American film festivals occupy very different ecosystems. In Europe, these events hold greater cultural prestige and are a matter of national pride, as well as coordinated legislation: the International Federation of Film Producers (FIAPF) has provided oversight for festival policies since 1933. The organization, which accredits 45 festivals from 29 countries across five continents, uses an intricate grading system to accredit high-end festivals (Cannes, Karlovy Vary, and Locarno are all considered “A” festivals). (By contrast, America has only the Film Festival Alliance, a non-profit founded with support from IFP five years ago.)

At its core, FIAPF represents the needs of producers, and it has been a crucial intermediary as film representatives navigate thorny questions about the prospects of premiering online or waiting for future opportunities. “Covid-19 hit the whole industry fast, including festivals,” said Florence Girot, the festivals director for FIAPF. “The first step was to call for solidarity both between the industry operators and festivals and within the festivals’ community in order to reinforce confidence in the ability of the sector to adjust.”

It also demands a reality check. “FIAPF has adapted the relevant rules of its accreditation program to provide festivals with greater agility to respond to the crisis,” Girot said. Festivals that go online have not lost their accreditation standing, and the organization hasn’t pushed back on every festival considering online options. In fact, FIAPF started a dialogue between festivals and producers last year about the potential to engage audiences online.

“We think that each festival is in the best position to decide on whether going online is consistent with its community’s expectations and its own history,” Girot said. “Decisions made at that time allow us to offer guidance for the accredited festivals interested in moving online today while reassuring those who have to make a decision about allowing their films to be presented this way.”

For Locarno, the online concept felt out of sync with the nature of the festival. The Swiss event caters to cinephiles with its international competition, much of which features boundary-pushing new work from rising filmmaker talent. At the same time, its outdoor Piazza Grande section provides a platform for higher-profile films, including studio releases. And while the festival could have made some of its discovery titles available online, they would have had a harder time gaining much attention.

“If we chose to go online in order to defend those small films, then we’d also lose in the process what makes Locarno what it is, this wide range of programming,” said Locarno artistic director Lili Hinston. “In that sense, it’s not good even for those films, because one of the strengths of Locarno is to introduce some very radical propositions together with bigger films. That’s what creates their value and allows them to enter the film industry.” (Previous Locarno hits opening virtually this summer range from Golden Leopard winner “Vitalena Varela,” an austere and experimental drama from a Portugal, and the Joseph Gordon-Levitt thriller “7500.”)

Instead, Locarno salvaged its sponsorships by creating a new competition for shuttered productions. The winners will be announced August 15, with two separate prizes of 70,000 Swiss francs going to each category. During that time, Locarno will also showcase its short films online and stream some films that were well received at the festival in previous years.

“We aren’t letting people down,” Hinston said. “We will try to shed some new light on the festival history with our archives and try to propose to the audience another way of curating, because in a year like this where everything has been blown up, we can experiment with our program and do things that we wouldn’t have been able to do in a normal year.”

Hinston added that all the competition films invited to the 2020 edition have been offered slots at the 2021 festival. That’s also the case at Karlovy Vary, which had completed about 60 percent of its program by the time it was canceled. “We are trying to secure the local aspect, which is in this current situation more important,” said artistic director Karel Och.

The traveling program, which will be announced next week, will play to smaller to audiences to ensure social distancing. Och said the festival contacted a range of theaters, including multiplexes, about participating in the roadshow. (Theaters in the Czech Republic reopened May 11, and garnered $716,000 from the top 20 movies in release last weekend.) The lineup may include some local premieres, but the program is focused on older films.

“When it comes to the core of the selection, the general approach is to extend the life of the new films,” Och said, noting that their events also allowed them to maintain sponsorship as they look ahead to 2021. “It’s important to survive for next year, and that’s looking promising these days.”

Och said film representatives entered a “gentlemen’s agreement” with the festival to make their titles available as world premieres next year. That arrangement goes well beyond FIAPF’s jurisdiction. “We believe that we need to be more flexible and look less at the regulations,” Och said. “Our attitude in general is to be as inviting as possible to the films. Nobody really knows when things will go back to normal.”

Cannes representatives declined to comment on their own decisions in advance of its program announcement, but the other summer festivals mused on the unique challenges it faces. “Cannes is Cannes, so we will never know the complexity of the pressure they’re under,” Och said. “I don’t think anybody can judge any other festival.”

Said Hinston, “Cannes helps some movies to exist. But having gone through this sort of decision process, I know it’s extremely difficult to build a lineup.”

Meanwhile, the major fall festivals continue to navigate unpredictable terrain. The Toronto International Film Festival has said that it is exploring some virtual aspects, while Venice, New York, and Telluride are expected to be mostly local events, if they can happen at all. The uncertainty of the pandemic has even lead to speculation about which festivals will be feasible in 2021, as well as what form they should take. “Nobody knows anything,” Och said, “but everybody’s trying to survive.”

Mon Jun 15 , 2020
HARTFORD, Conn. (AP) — After a knock on his door, third-grade student Jamie-Lee emerged to see his school principal smiling at him from his doorstep. She held out her arms, offering a socially distant “air hug,” and told the boy how much she’d missed him since the pandemic closed their […] 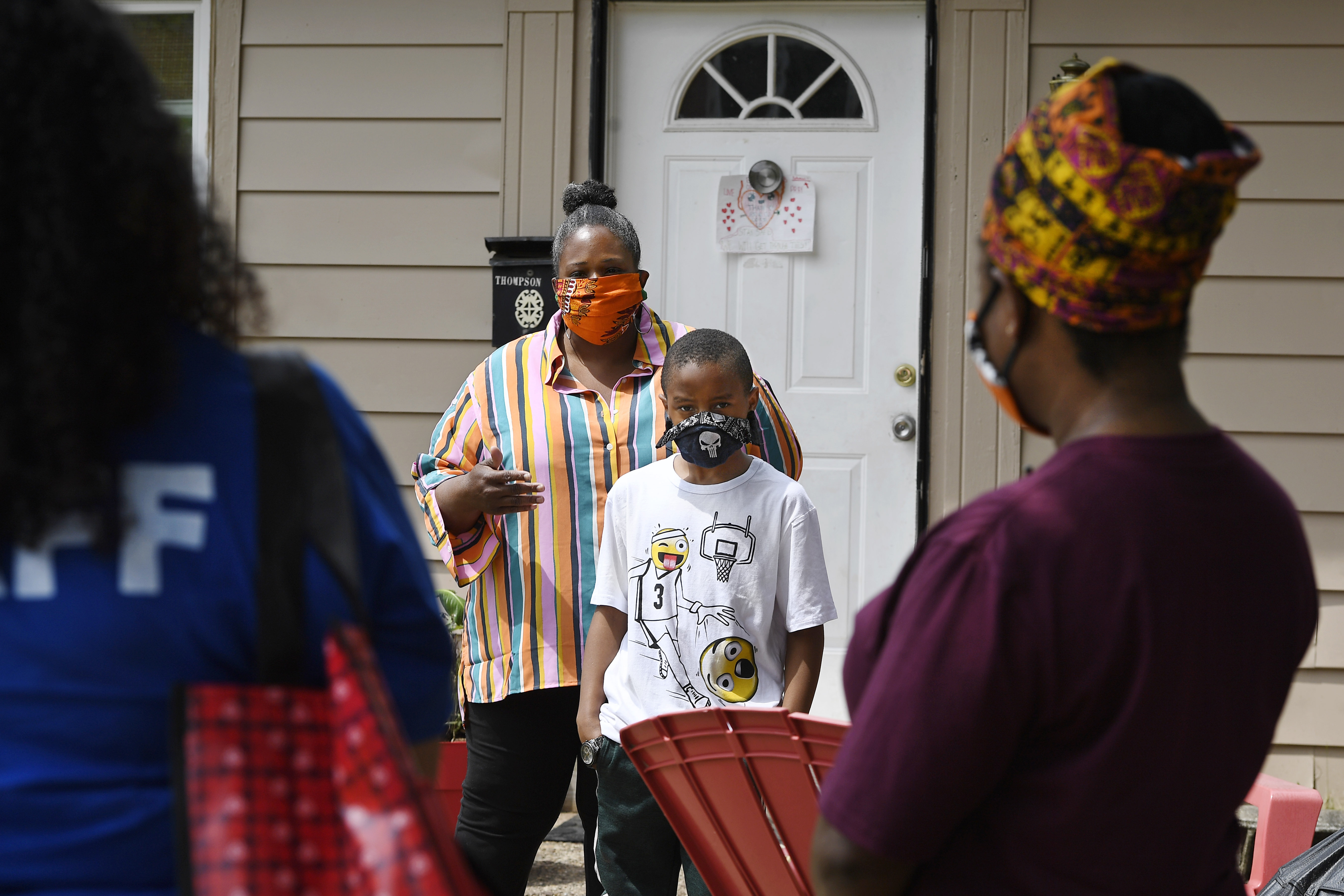