LONDON — Designers taking part in London’s first all-digital showcase, which began Friday and runs through Sunday, have been delving deeper into their respective cultural backgrounds as they navigate the challenges of telling their stories online and in film formats.

Indeed, Saturday was a festival of fashion films – some better than others – with designers showing old, new and re-worked archive pieces in what is a new medium for many.

Tíscar Espadas, a Royal College of Art graduate and recipient of a Burberry scholarship, presented her collection with a video reflecting her Spanish heritage, from music and tap dancing to the wrap-around ties on blouses and the curve on the shoulders of jackets.

Espadas’s video, “Capitulo: II, First Act,” showed a man getting dressed and piling on layers of clothes against a simple white backdrop. It worked much better than some of the other film presentations, which have been playing with busy graphics, green screens and obscure narratives — highlighting that fashion still has a long way to go in familiarizing itself with film.

Bianca Saunders was another highlight in Saturday’s lineup: Instead of trying to experiment with film or present new products during this uncertain time, she chose to turn the spotlight on an online ‘zine she produced alongside the photographer Joshua Woods and the writer Jess Cole.

She presented the project during an online panel discussion, hosted with Showstudio, and voiced her views on diversity and inclusion in the fashion industry.

“I’ve always wanted my brand to exist not just as clothing, but to make people think and create conversations,” said Saunders.

The ‘zine, “We Are One of the Same,” looks at gender and connection by photographing twin sisters and brothers, looking to highlight their similarities.

The film was a year in the making, and was not made in direct response to current affairs. Yet, it felt extremely relevant as it highlighted Saunders’ commitment to collaboration and the creative connections between herself, Woods and Cole.

Woods said that when she became part of the British Fashion Council’s New Wave Creatives program, “I got to be among other creators of color. We saw each other in the room of the fashion elite and we wanted to collaborate because, obviously, you could see how many of us were in that room. We all hold a close bond when it comes to pushing our narratives and ideas.”

“Seeing that community of black creators is important, because working alone and not seeing anyone who looks like you makes it difficult to push forward. It helped me to continue to want to pursue fashion and fashion imagery.”

Saunders added that working with fellow creatives of color made the experience “freeing,” because when there’s a level of mutual understanding, you don’t need to constantly explain yourself.

Addressing the killing of George Floyd by police and the anti-racism activism that followed, Saunders pointed to the importance of speaking up and broadening that conversation to all races.

“We can’t change what’s happening if other races aren’t aligned,” she said. “No one is exempt from speaking about this, and for the past few weeks I found it really traumatic being interviewed about what’s happening. Every black person is forced into activism because you are always trying to explain the black experience. I’m trying to explain my experience being this body in fashion – which isn’t very diverse at all.”

Five percent of the proceeds from sales will be donated to Kaleidoscope Trust, an organization supporting the rights of LGBT+ people in countries where they are discriminated against or marginalized because of their sexual orientation or gender identity.

Christopher Raeburn took on sustainability. In an Instagram Live conversation with GQ editor Dylan Jones, Raeburn talked about his new project Raefound, a curated collection of old, unworn military garments, and the importance of reducing waste in fashion.

“Raefound is my provocation for the industry,” said Raeburn, who was speaking from his London studio. “Let’s work with what we’ve got. We have an opportunity now to clean up our industry, and the idea of going back to ‘normal’ scares the hell out of me. We need to see real, systemic change in this industry, which operates with a very old-fashioned, formulaic model.”

Other designers worked past collections into new contexts and mediums.

Xander Zhou repackaged his fall 2020 collection as a science documentary, showcase his futuristic designs with factual narratives. The film was produced in Shanghai last week, with Zhou monitoring the process from the Netherlands.

“I have not been able to travel to China and physically work together with my team since January. Although modern technology enabled us to work together virtually, including on an actual spring-summer collection, I do feel it is too early to go back to business as usual. For now, I just want to share something humbler. One day, this may be an endearing reminder of the things we did back in those days.”

Xu Zhi presented an impressive, computer-generated film showcasing his fall 2020 men’s and women’s collections, which were inspired by his trip to New York last September.

The designer curated the set and designed movements for each model before shooting everything in front of a green screen. Later, everything was compiled and manipulated to give them impression that models were walking from the subway station to SoHo, taking an elevator to an apartment, and later to the rooftop in one continuous shot. Highlights from the collection include his signature fringe design, seen on dresses and jackets, as well as a beige patchwork coat.

Hill and Friends brought back the pink-clad luggage porters who took part in the brand’s first show at at Claridge’s in London. The accessories brand debuted a fun, short film, titled “Happy Factory from Home.”

The color pink ran throughout the film, starting with an alarm waking up a man who appears to be a porter in the company. He cleaned his teeth with a pink toothbrush, had strawberry smoothies and similarly-colored cereal for breakfast, before driving his pink Mini to work.

The film featured new styles in vibrant colors. A deer, a rabbit, and a bird also made an appearance in the film, before Emma Hill, the founder, pushed a catering trolley to the factory and shared a cup of tea with the porter.

The Syrian-born British designer Nabil Nayal chose the color blue for his film. He presented his tenth collection “Chapter X: The Archives in Blue” with unseen footage. The film was new, and featured a re-worked mix of archive pieces.

Known for dramatic silhouettes and shirting techniques, he showcased hand-smocked dresses, crisp shirts with pleated necklines and light jackets, and skirts made from organza and organdy.

“During the Reformation, blue was highly regarded as a moral shade, separate from the ‘true’ colors of red, green yellow and purple, which were deemed extravagant and grotesque. The use of black and white, in practice, privileges shape and form over decoration. Blue allows me to see the archives in a new light, without detracting from the essence of the garments,” said Nayal.

UK internet speeds are among the slowest in the developed world

Sun Jun 14 , 2020
Average internet speeds in the UK are among the slowest in the developed world, new research has revealed. The UK ranked below Barbados, Panama and Thailand in an analysis of average broadband speeds globally in 2020, failing to make it into the top 40 countries. Singapore once again topped the […] 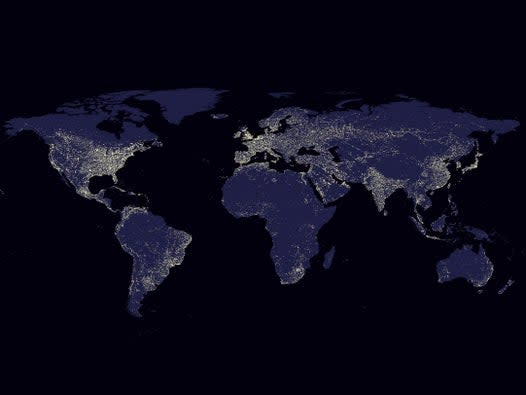