BEIJING (AP) — In the global race to make a coronavirus vaccine, a state-owned Chinese company is boasting that its employees, including top executives, received experimental shots even before the government approved testing in people.

“Giving a helping hand in forging the sword of victory,” reads an online post from SinoPharm with pictures of company leaders it says helped “pre-test” its vaccine.

Whether it’s viewed as heroic sacrifice or a violation of international ethical norms, the claim underscores the enormous stakes as China competes with U.S. and British companies to be the first with a vaccine to help end the pandemic — a feat that would be both a scientific and political triumph.

“Getting a COVID-19 vaccine is the new Holy Grail,” said Lawrence Gostin, a global public health law expert at Georgetown University. “The political competition to be the first is no less consequential than the race for the moon between the United States and Russia.”

China has positioned itself to be a strong contender. Eight of the nearly two dozen potential vaccines in various stages of human testing worldwide are from China, the most of any country. And SinoPharm and another Chinese company already have announced they’re entering final testing.

Both China and SinoPharm have invested heavily in a tried-and-true technology — an “inactivated” vaccine made by growing the whole virus in a lab and then killing it, which is how polio shots are made. Leading Western competitors use newer, less proven technology to target the “spike” protein that coats the virus.

That protein is “a good place to make our bet,” Dr. Gary Nabel, chief scientific officer of the French pharmaceutical company Sanofi, said at a U.S. biotechnology industry meeting. But “it’s good to have some diversity. I like the fact that there is an inactivated, whole vaccine. That provides an alternative in case one of these should fail.”

SinoPharm’s claim that 30 “special volunteers” rolled up their sleeves even before the company got permission for its initial human study raises ethical concerns among Western observers. The company’s post cites a “spirit of sacrifice” and shows seven men in suits and ties — a mix of scientists, businessmen and one Communist Party official with a background in military propaganda.

“The idea of people willing to sacrifice themselves … is pretty much expected in China,” said Yanzhong Huang, a global health expert at the Council on Foreign Relations, a U.S. nonprofit organization.

But with corporate and government officials getting vaccinated, other employees “might feel pressure to participate. That would violate the voluntary principle” that is a bedrock of modern medical ethics, Huang said.

The first round of human testing — a Phase 1 trial — requires permission from a country’s drug regulators, who decide whether there is enough laboratory and animal evidence to justify the attempt.

SinoPharm, which declined to comment for this story, is testing two vaccine candidates that received government permission for Phase 1 trials in mid- to late April. In a post on its subsidiary’s official WeChat account, the company says it conducted its “pre-test” at the end of March “to make the vaccines hit the market as early as possible.”

It would not be the only shortcut China is taking. In late June, the government gave special approval for the military to use an experimental vaccine made by another company, CanSino Biologics, skipping the final testing needed to prove if it really works. CanSino now says it’s in talks with four other countries about doing that research.

Some participants in the first CanSino clinical trial in March said in social media posts that researchers on the project claimed they had been injected Feb. 29, before regulators gave the study the go-ahead. A researcher said team leader Chen Wei, a renowned military virologist, was the first to receive the experimental vaccine, one of the participants told state-owned Beijing News.

In May, a Russian scientist told the RIA Novosti news agency that he and fellow researchers also had vaccinated themselves ahead of approved studies. “It’s self-defense in order for us to continue working” on a vaccine, said Alexander Gintsburg of the Moscow-based Gamaleya research institute.

“Everyone is alive and well and cheerful,” he added.

Russia’s Association of Clinical Research Organizations condemned the action as a “crude violation of the very foundations of clinical research, Russian law and universally accepted international regulations.” But about a month later, Russia launched its first vaccine study, using the Gamaleya product.

Examples of scientists experimenting on themselves abound in medical history.

Around 1900, Pierre Curie, Marie Curie’s husband, deliberately burned his arm with radium as part of their radiation experiments. In the 1950s, Jonas Salk tested his ultimately successful polio vaccine on himself and his family. In the 1980s, Australia’s Dr. Barry Marshall drank a bacteria-laden broth as part of his quest to prove germs, not stress, cause stomach ulcers. He was right.

And in China in the 1970s, a researcher named Tu Youyou, working in a secret military program, discovered an important anti-malaria drug that she first tested on herself. In 2015, she won a Nobel Prize.

With a COVID-19 vaccine, national pride is at stake. President Xi Jinping pledged that any Chinese-made vaccine would be a “global public good.”

All this is taking place as China strives to overcome years of drug scandals — the latest coming in 2018 when authorities recalled a rabies vaccine and later announced batches of children’s DPT vaccines, for diphtheria, pertussis and tetanus, were ineffective.

Giving the experimental shot early to SinoPharm’s employees “sends a signal to the Chinese people, ‘You guys should not worry about the safety of the vaccine,’” Huang said.

Scientists vehemently debate self-experimenting because what happens to one or a few people outside of a well-designed study is anecdote, not evidence. More than 600,000 U.S. schoolchildren had to be given Salk’s vaccine or a dummy shot to prove polio protection. It took almost another decade to validate Marshall’s ulcer germ theory, which earned him a Nobel as well.

Modern international ethics rules require participants in medical research to be fully informed and to freely consent. In the U.S., studies involving people must receive approval from an “investigational review board,” and most U.S. research institutions explicitly state there is no exception to board approval for self-experimenting.

“Employees may not be the best volunteers because employees are in a relationship which is not equal,” said Dr. Derrick Au, bioethics director at the Chinese University of Hong Kong.

Still, he said questions about China’s medical ethics might disappear if one of its COVID-19 vaccines ultimately proves to work. “It’s difficult to argue against success,” Au said.

William Lee of the Milken Institute, a think tank in Santa Monica, California, that is tracking COVID-19 vaccine progress, said that because of China’s past scandals, “if they are successful as being the first with a workable product on the market, it had better be so pristine, so pure that people who are outside of China would be willing to buy into it.”

The Associated Press Health and Science Department receives support from the Howard Hughes Medical Institute’s Department of Science Education. The AP is solely responsible for all content.

More than 1,000 aspiring surgeons couldn't take a critical online exam after the system failed. Now, they're left worried if it'll ever happen.

Fri Jul 17 , 2020
surgeon HRAUN/Getty Images An exam taken by surgeons in the US saw its online system fail Thursday, leaving more than 1,000 aspiring surgeons in the dark on when — or if — they will take the test. The test is a critical and costly part of transitioning from medical resident […] 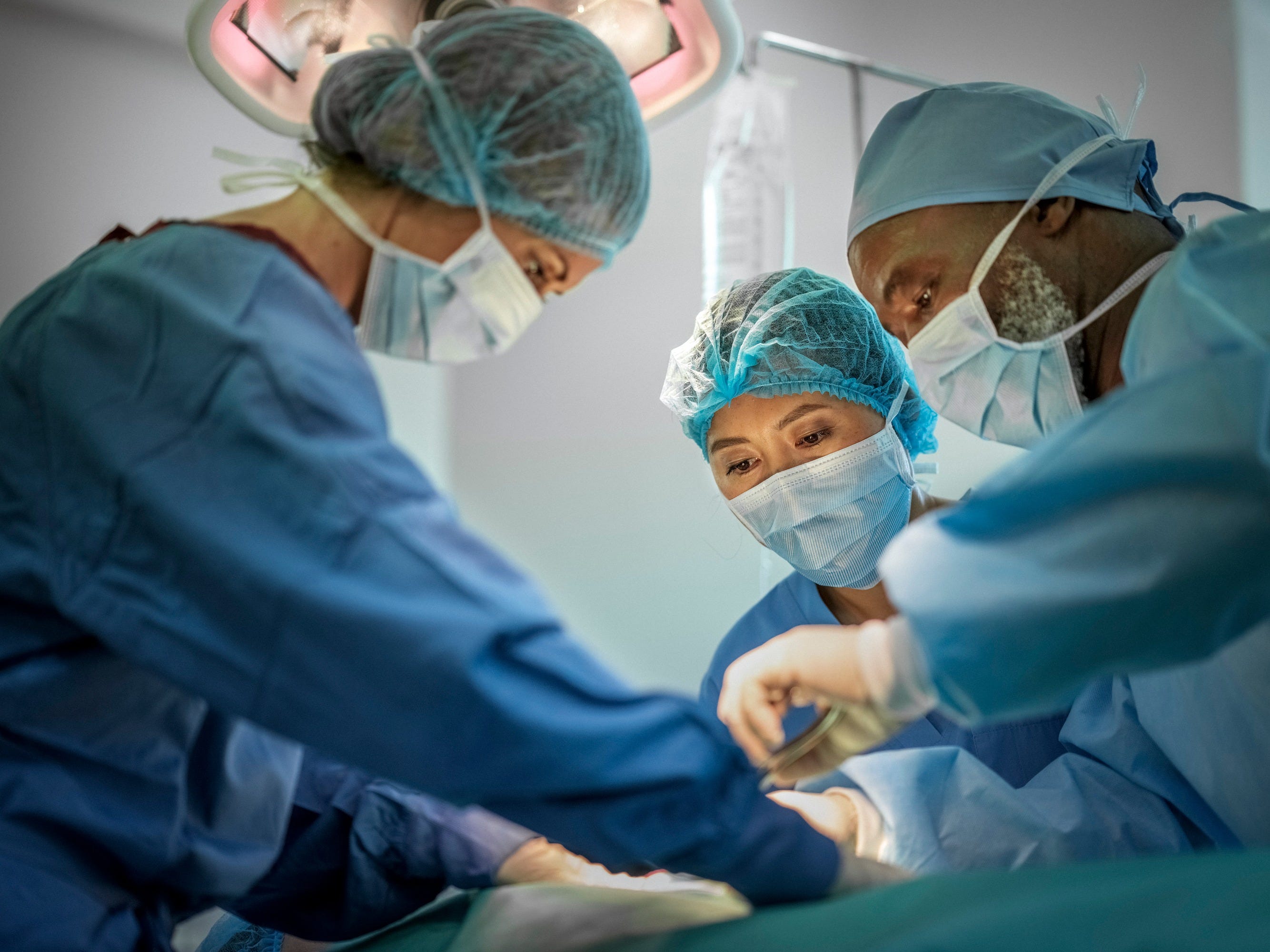