Crypto firms are cooking up ways to become “Travel Rule” compliant, Satoshi’s stash got a little bigger and one of Ethereum Classic’s top supporters is walking away from the project.

You’re reading Blockchain Bites, the daily roundup of the most pivotal stories in blockchain and crypto news, and why they’re significant. You can subscribe to this and all of CoinDesk’s newsletters here.

Travel Rule
BitGo, Coinbase and other top exchanges are expected to release a white paper next month detailing a type of “bulletin board” meant to help exchanges comply with the Financial Action Task Force’s (FATF) “Travel Rule.” Participants would share addresses on the board and, if another member claims an address, the two entities could then share data P2P to keep personal information out of the reach of hackers. Gemini, Kraken, and Bittrex may also be participating in the Travel Rule working group, according to The Block. Separately, blockchain security firm CoolBitX and on-chain analytics company Elliptic are working together on another “Travel Rule” solution.

Satoshi’s Billions
Whale Alert found on-chain evidence that Bitcoin’s creator mined approximately 1,125,150 BTC (~$10.9 billion) as the network was getting off the ground. This is up from the 1 million BTC Sergio Demian Lerner initially attributed to Satoshi Nakamoto in 2013, by examining the “extra nonce” patterns thought to be caused by Nakamoto’s mining rig. In a Medium post, researchers describe how Satoshi continued mining with the same rig until at least May 2010, capturing 22,503 of the first 54,316 block rewards.

FYI
YFI, the governance token for Yearn.Finance, is the latest DeFi project to capture the attention of yield farmers. The token’s creator Andre Cronje hasn’t set aside any of the tokens for himself and called it “a completely valueless 0 supply token,” in a Medium post. That all tokens are set aside for liquidity providers may have influenced a price run up to $2,374, though the project’s name (an unflattering acronym) and what appears to be a backdoor that could allow Cronje to print an infinite amount of YFI, have raised eyebrows. As of 13:00 UTC today, the price has collapsed to $821.07.

Hard Fork Away
One of Ethereum Classic’s largest power providers has voted to abandon the project after an upcoming hard fork. OpenEthereum is the latest client to walk, citing concerns with the blockchain’s immutability, according to a GitHub vote Thursday. Of the 615 current Ethereum Classic nodes listed by ETC Nodes, 425 won’t update in the future as developers make changes via hard forks. OpenEthereum has chosen to shut down support for the original Ethereum mainnet to conserve developer energy for its Ethereum client, formerly known as Parity-Ethereum.

Real-Time Alerts
CipherTrace, a blockchain analytics software firm, has deployed a predictive risk-scoring system that the company says provides real-time alerts on suspect crypto transactions for its exchange, investor and investigator clients. The tool will assign risk based on the on-chain histories of transacted funds, the Silicon Valley firm said. Inbound cryptos with unseemly ties (from sanctioned countries or a fraud campaign, for example) would get a “high risk” score under the system.

The BSN is a toolbox for open source developers to build blockchain applications. Sometimes called the “digital belt and road initiative,” the BSN is an oxymoronic experiment in nation state-led decentralized tech development.

“This is part of China’s plan to be the one and only infrastructure provider for blockchain firms around the world,” CoinDesk’s David Pan reports. Evidence of President Xi Jinping’s commitment to “seize” the blockchain opportunity, the BSN reveals lingering contradictions in China’s approach to open source crypto projects.

“The Chinese government and regulators are very cautious about decentralized public chains and try not to get involved in anything related to a public blockchain,” Hongfei Da, founder of NEO, said. “It is interesting to see BSN, which has a clear commercial purpose and is backed by entities with government background, is supporting such projects.”

Correlation Data Point
Bitcoin jumped from $9,190 to $9,360 in early morning trading, according to CoinDesk’s Bitcoin Price Index, after European Union leaders announced a €750 billion post-pandemic fiscal stimulus plan. This is another data point showing correlation between Bitcoin and traditional equities, as some major European equity indices are up at least 1.5% each, while Germany’s DAX index has nearly erased losses incurred during the coronavirus-led market tumble.

ETH’s Real Value?
Ether’s total market capitalization stands at about $26 billion, if you’re not taking into account all of the digital assets built atop the Ethereum blockchain. The combined value of ERC-20-standard tokens – which include stablecoins like tether, altcoins like Chainlink’s LINK and DeFi darlings like Kyber’s KNC – is around $26 billion, according to the data provider Messari. Including all these assets, the Ethereum ecosystem’s market cap is around $50 billion – closer to bitcoin’s $170 billion than if ether were considered alone. “The comparison shows how the rapid pace of development this year on Ethereum has brought the blockchain’s ecosystem closer to challenging Bitcoin. The value gap narrowed over the past month as bitcoin’s price stagnated, while demand for stablecoins and a flurry of activity in DeFi has ignited the value of Ethereum and the tokens that depend on it,” CoinDesk’s First Mover reports. You can get the full analysis in your inbox by subscribing here.

Five years
Five years ago, an unlikely project went live. It called itself “the world computer” and it promised to transform not just cryptocurrencies as we knew it, but the very idea of what could be done with cryptography and consensus. Ethereum had arrived.

From its technical aspirations to unicorns and memes, Ethereum is a culture on its own. It has spawned blockchain uses — from digital cats to yield farming — previously unimagined.

Ethereum is at a crossroads. But it must complete an ambitious and fraught retooling of its foundations — the long awaited move to Ethereum 2.0 — to keep up with the market’s demands.

CoinDesk is marking the milestone with Ethereum at Five: a cross-platform series comprising a series of special coverage, a pop-up newsletter and live-streamed discussions. New issues and sessions launch daily from July 27-31. Register for CoinDesk Live and our pop-up newsletter.

Surprise Attack?
Brenna Smith, an open source researcher and contributor for the investigative website Bellingcat, thinks no one should be surprised that Twitter was hacked last week, least of all Twitter. For years, celebrity impersonations and crypto scams have run rampant on the platform, without any meaningful redress. “Essentially since Bitcoin’s inception, cyber criminals and scammers have capitalized on the currency to funnel proceeds from emails scams, fake websites, and propositions on chat forums. Then, they began leveraging major social media platforms and impersonating celebrities. Mainstream social media platforms and celebrities provide two critical ingredients to a lucrative hack: a large audience and a semblance of credibility,” she writes.

Singularity or Bust
The latest episode of The Breakdown looks at GPT-3, “the latest artificial intelligence tool to have you questioning the veracity of what you see online.” NWL gives an overview of the new language tool and asks whether we should be terrified.

Prosus Growth Machine Misses Out on Another Big-Ticket Deal

Tue Jul 21 , 2020
(Bloomberg) — The big deals that Prosus NV should be winning are slipping through its fingers. Late last year, Takeaway.com NV trumped Prosus’s bid for Just Eat Plc. Now EBay Inc.’s classifieds business is being scooped up by Prosus’s smaller Norwegian rival, Adevinta ASA, for $9.2 billion. It’s not a […] 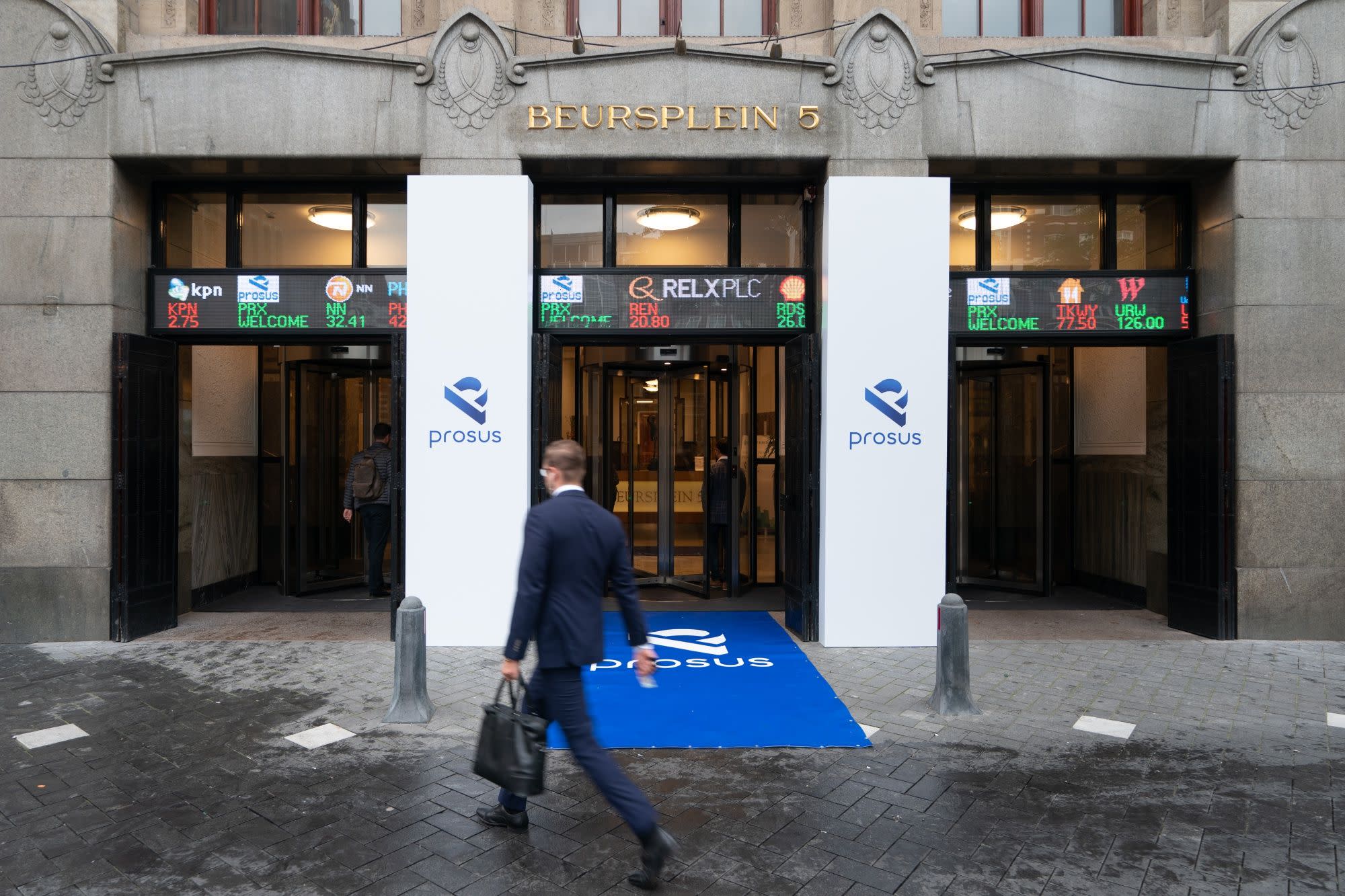