As the White House, the nation’s pediatricians and many worn-down, economically strapped parents push for school doors to swing open this fall, local education officials say they are being crushed by the costs of getting students and teachers back in classrooms safely.

President Donald Trump threatened this week to cut off federal funding to districts that do not reopen, though he controls only a sliver of money for schools. But administrators say they are already struggling to cover the head-spinning logistical and financial challenges of retrofitting buildings, adding staff members and protective gear, and providing students with the academic and emotional support that many will need after a traumatic disruption to their lives.

The federal relief package passed in March dedicated $13.5 billion to K-12 education — less than 1% of the total stimulus. But education groups estimate that schools will need many times that, and with many local and state budgets already depleted by the economic effect of the coronavirus, it is unclear where it will come from.

“If Congress doesn’t do something in the summer, there is going to be a big mess,” said John Lee Evans, president of the San Diego Board of Education.

Evans, a psychologist, said his district hoped to physically reopen five days a week, starting Aug. 31, for families that want their children to attend in-person classes. But it currently has the money to do so safely for only half of the academic year, he said, and might need to revert to online instruction after the winter holidays.

The district’s superintendent, Cindy Marten, has been calling colleagues in political swing states, like Ohio and Colorado, to ask them to lobby their senators to pass additional education funding. Democratic plans in Congress call for between $58 billion and $175 billion for local schools, but those efforts lack significant Republican support.

“It’s incredible to me that the federal government would see the necessity of bailing out airlines and banks,” said Adam Goldstein, a fifth-grade teacher in San Diego, “and not see the need to do something similar for the public schools in this country.”

Sen. Mitch McConnell of Kentucky, the majority leader, has said he is open to a “final” relief bill that would cover some of the expenses of opening schools safely. “We can’t get back to normal if the kids are not back in school,” he said this week.

Exactly how much money the nation’s schools need to reopen is a matter of debate, complicated by the conflicting, sometimes shifting advice and guidelines that administrators have received from government agencies and medical authorities.

In May, the Centers for Disease Control and Prevention said that remote learning was the safest option and that students in classrooms should remain 6 feet apart “when feasible.” A 6-foot requirement would mean that many schools could accommodate half of their students or fewer at any given time.

Given that, many systems planned a hybrid approach, with students splitting their time between classrooms and remote learning. On Wednesday, Mayor Bill de Blasio of New York said students in the nation’s largest school district would most likely attend only one to three days per week if schools open in September.

The Trump administration has promoted an alternate set of guidelines from the American Academy of Pediatrics that suggest 3 feet of physical distance may be sufficient in classrooms if students wear masks.

Regardless of which recommendations are followed, reopening schools will require changes. An average-size district of 3,700 students can expect $1.8 million in pandemic-related costs for 2020-21, representing 3% to 4% of a typical annual budget, according to an estimate from AASA, the School Superintendents Association. Districts say they typically operate on tight budgets and even more so this year as state and local tax revenues run low.

But some experts have suggested that much of what schools are planning for the fall, such as checking students’ symptoms before they board buses or enter schools, is unnecessary, akin to the type of “security theater” Americans became accustomed to after the terrorist attacks of Sept. 11, 2001 — reassuring but often providing only superficial protection.

That criticism is driven in part by emerging research suggesting that children are not only less likely to be infected by the coronavirus but also less likely to transmit it to one another or to adults. Some school finance experts have also suggested that districts need to make tougher choices, prioritizing core educational functions.

Marguerite Roza, director of the Edunomics Lab at Georgetown University, suggested that schools could save money by holding core classes in large spaces like auditoriums or gyms, allowing a single teacher to work with more students while keeping everyone physically distanced.

Too few systems, Roza said, were willing to delay planned pay raises for teachers or furlough unneeded staff members. She also suggested cutting programs like indoor sports and chorus, which may not be safe this year because they spread respiratory droplets that can transmit the coronavirus.

In much of the country, such changes require consideration of teacher contracts. Like many districts, San Diego is currently in tense negotiations with its teachers’ union regarding return-to-work conditions.

A key demand of many unions is to protect the jobs of teachers who are at high risk of serious illness if they contract the virus or who live with someone who is high risk. Many of those teachers prefer to continue to work remotely. Nationwide, more than a quarter of the public school teaching force is over the age of 50.

Goldstein said he was eager to return to his fifth-grade classroom in San Diego. But like many teachers across the country, he was not yet convinced that his district had enough money, or the detailed plans in place, to protect the health of employees and students, especially given rising coronavirus caseloads in California and many other states.

He would feel more assured, he said, if teachers could be guaranteed small class sizes — he had 35 students on his roster last year — and if school staff and students could be regularly tested for the virus, something the CDC said was unnecessary.

Administrators forging ahead with plans for full-time physical school, even as the virus rages, may have been seized by a type of “wishful thinking,” Goldstein added.

Marten, the San Diego superintendent, has the job of trying to balance all of the competing needs and requirements to get students and teachers back in classrooms.

Closing school buildings in the spring brought the district some savings — lower utility bills and fuel costs for vehicles, for example — but did not come close to covering the $30 million it took to transition to remote learning, she said. The district took on a variety of expenses, including meal distribution for low-income families and providing laptop chargers and home internet connections for students who lacked them. It also offered hazard pay to staff members who delivered those meals and devices.

The district has not made significant program or staff cuts.

When schools shut down in Dundee, Michigan, the rural district of 1,700 students an hour from Detroit did reallocate $350,000 intended for a new athletics complex, according to the superintendent, Edward Manuszak. It spent much of that money preserving jobs.

Manuszak said that one of his priorities was maintaining trust between the district, its employees and the community during a difficult time.

Superintendents in districts without collective bargaining have more flexibility in how they staff their schools under pandemic conditions. Teachers who work for Marietta City Schools in Georgia can ask to go on leave if they are uncomfortable returning to physical classrooms, said Grant Rivera, the superintendent. But they might not receive full pay and will not have the opportunity to work from home, he said.

Rivera plans to staff the district’s remote learning program, which will be an option for any family that chooses it, from among those teachers who are willing to return to school and who have also demonstrated skill in online instruction.

He faces a daunting to-do list as he prepares to reopen the school system Aug. 4. The district plans to spend $200,000 to install desk partitions in classrooms where it will be impossible for students and teachers to stay 6 feet apart. It will also distribute masks, which will be required for teachers and students, and hire an employee to assist with contact tracing.

To pay for it all, the superintendent is looking for philanthropic support, lobbying his county for $2.9 million in additional funds and also hoping for federal aid.

“You can see what they value,” he said of political leaders, “by what they spend their money on.”

Facebook has failed to control hate speech. Will advertiser demands change anything?

Fri Jul 10 , 2020
Jonathan Greenblatt, the chief executive and national director of the Anti-Defamation League, was not all that optimistic in advance of the online meeting that Facebook CEO Mark Zuckerberg and COO Sheryl Sandberg had set up with him and the heads of other civil rights groups last Tuesday. Many of them […] 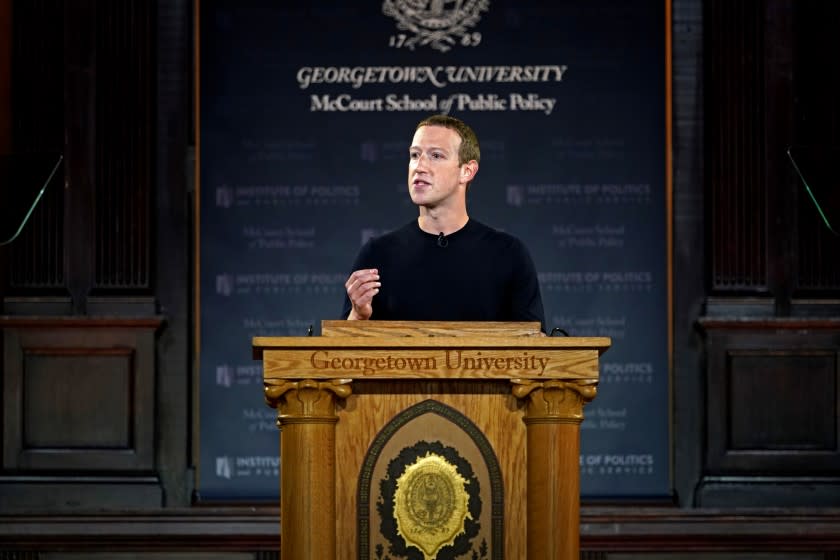