Apple faces two European Commission probes into whether it has broken competition rules.

One investigation centres on iPad and iPhones being limited to installing apps from Apple’s own App Store, among other restrictions imposed on third-party developers.

The other involves Apple Pay, with one issue being that other services cannot use the iPhone’s tap-and-go facility.

Apple said it was “disappointing” the EU was “advancing baseless complaints”.

And it accused companies that had raised allegations against it of wanting a “free ride”.

“Our goal is simple: for our customers to have access to the best app or service of their choice, in a safe and secure environment.”

Apple is also under scrutiny in the US where the House Judiciary Committee is reported to have asked for its chief executive Tim Cook to appear alongside other tech leaders to answer questions about anti-trust concerns.

Amazon has said that its chief executive Jeff Bezos is willing to testify, so long as Mr Cook and his counterparts at Facebook and Google also give evidence.

The investigation into Apple’s App Store stems from a complaint raised by the music streaming service Spotify.

Apple typically charges apps a 30% cut of any sales, although that rate falls to 15% for the second and later years of any subscription.

Publishers often sell media and other digital goods at a lower price when bought outside of their apps, but consumers can be unaware of the fact.

Since Apple only allows apps to be downloaded from its own store, and has repeatedly updated its mobile operating system to prevent “jailbreaks” that circumvent this rule, it is argued that third-parties have little option but to comply with its conditions.

The only alternative is to offer their products as web-based services, which can limit their functionality.

“Apple’s anti-competitive behaviour has intentionally disadvantaged competitors, created an unlevel playing field, and deprived consumers of meaningful choice for far too long,” said Spotify in response to the latest development.

“We welcome the European Commission’s decision to formally investigate Apple, and hope they’ll act with urgency to ensure fair competition on the iOS platform for all participants in the digital economy.”

The Apple Pay investigation centres on a technology that allows iPhones and Apple Watches to make tap-and-go payments. It also lets users buy goods via an app or website without having to give their payment card details to the seller.

The European Commission has concerns about the conditions imposed on services that have added the facility.

It also has reservations that alternative payment tech cannot make use of the near field communication (NFC) chips in Apple’s products to work with contactless payment terminals.

By contrast, Samsung phones – for example – let their NFC chips be used for both Samsung Pay and Google Pay.

“It is important that Apple’s measures do not deny consumers the benefit of new payment technologies, including better choice, quality, innovation and competitive prices,” said Margrethe Vestager, the EU’s Competition Commissioner and Executive Vice President.

The commissioner added that she had not set a deadline for the investigations to be completed.

What today’s move is about is the huge power over prices and innovation that control of a platform gives to a tech giant.

Ever tried to buy a Kindle book via Amazon’s iPhone apps? You can’t because Amazon doesn’t want to see Apple walk away with a 30% cut of the purchase price.

App developers big and small have protested over the years about what they see as Apple’s abuse of its position as a gatekeeper to its iOS platform.

Similarly, the tech giant’s strict controls on the way NFC works on its phones has sparked complaints that Apple Pay has huge advantages over what could be more innovative payment systems.

Complaints about this behaviour aren’t limited to Europe, but once again Margrethe Vestager has shown that she wants to set the pace in pushing back against the power of the big tech platforms.

And another American behemoth may be about to feel the heat – all the signs are that Ms Vestager is about to determine the outcome of an existing probe into how Amazon controls its online retailing platform.

The twin inquiries follow an earlier case in which Brussels ordered Apple to pay 13bn euros ($14.4bn; £11.4bn) after claims that Ireland had given the company illegal state aid by failing to tax it properly. The Irish government and Apple have appealed the ruling.

The latest probes are likely to cast a shadow over the firm’s Worldwide Developers Conference (WWDC), which begins on Monday.

Apple has already claimed its app ecosystem generated more than half a trillion dollars in sales and other billings last year, saying the vast majority of that was not subject to it taking a commission.

But its relationships with some developers have become strained.

In recent days, one has called on Apple to reduce its standard cut from 30% to 20% while another has accused the firm of operating a “capricious and inconsistent review process” that can cause delays to the release of even minor app updates.

In an interview pegged to last year’s WWDC, Mr Cook said that he thought that scrutiny of the firm was fair but added that regulators should bear in mind it does not have a monopoly of any market.

Tue Jun 16 , 2020
Amazon Distance Assistant Amazon Amazon is implementing a new AI camera system known as the “Distance Assistant” at some of its warehouses to make sure employees are following social distancing guidelines. The system is composed of a camera, a 50-inch monitor, and a computing unit. When employees walk past the […] 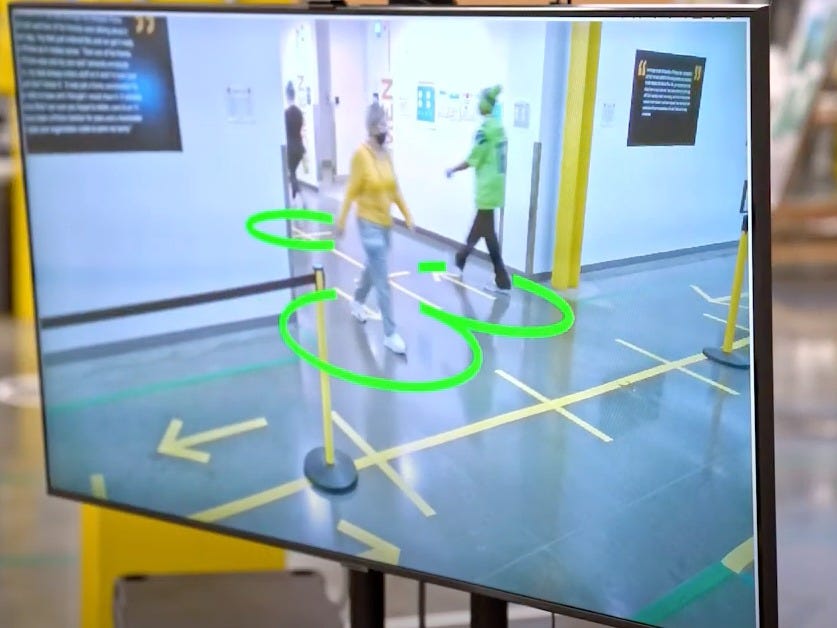