No splashy premieres at the Palais. No Croisette-apartment dealmaking. While there won’t be a physical Cannes Film Festival this year, this just might be the most important Cannes ever for getting business done.

As much of the industry’s work has been restricted to development amid the pandemic, agents and buyers are counting on two concurrent virtual markets that start this week to help move those projects forward. And with the fate of fall festivals up in the air, the Cannes markets could be the only opportunity to conduct business en masse for the entirety of 2020.

The markets — one spearheaded by American sales agencies and the other run by the official Marché du Film — represent the first major virtual markets to go live since the pandemic roiled the world. Agents say the two are complimentary, rather than competitive: The delineation points to the way business has always been done at Cannes.

Think of the agencies’ market as a virtual representation of the private offices, screenings, and meetings agencies would set up on the ground, while the online Marche is meant to replicate the activity inside the basement of the Palais. Just like the agencies’ would at Cannes, their virtual market is focused on North American sales, while the Marche is more internationally focused.

While uncertainty continues to surround exactly how the film industry will emerge from the pandemic, buyers are still hungry to add films to their pipelines for the next and subsequent years. Packages of in-development titles will feed that need, while some finished movies are available, even as uncertainty surrounds festival programming for later this year. “I think the easiest way for buyers to be confident about it is to look for well-priced material that’s more genre facing,” one sales agent said.

Even as theaters slowly begin to open in the US and Europe, buyers recognize that the promise of audiences quickly returning to theaters in droves is shaky at best. Genre films and lower-priced titles could both work well in a scenario where theatrical releases are not an option or offer a less-than-expected return-on-investment. But there are still plenty of films with big names and big commercial potential. Buyers will be less skittish about these, especially when they come with delivery dates of a year or more in advance.

Regardless of their approach, buyers are expected to be attentive in their perusal of packages and finished films given the global confluence of industry players all under one virtual roof. “Business hasn’t stopped because of the virus. We’re still looking to slate our 2021 schedule,” said Arianna Bocco, IFC Films’ EVP of acquisitions. “It looks like for the remainder of 2020 there will be very modified festivals. This is really what we have to work with, so we are definitely taking it very seriously and are very, very engaged with it because we don’t really have other opportunities to have a better picture of what’s available from the worldwide sales agents.”

Here are 12 of the buzziest films and packages, with a focus on English-language titles.

Argentine director Pablo Trapero, who won the top directing prize at Venice for his 2015 film “El Clan,” is set to direct this thriller for Studiocanal, with Lily James signed on to star. James plays an American woman who, on a visit to Paris, becomes the victim of mistaken identity and subsequently is caught up in a secret international government operation. James’ star has been rising since starring as the titular character in the 2015 live-action “Cinderella,” her co-lead has yet to be cast but could help make this film a hot item. The film is set to start shooting in Paris next year.

Critics may have panned the most recent Kristen Stewart-starring biopic, “Seberg,” but not on account of Stewart’s fine performance as the complex French New Wave figure. Indeed, the César-winning actress shines with the right script and direction and “Spencer” has all the elements that could do service to Princess Diana, who Stewart is set to play. Director Pablo Larraín has proven himself deft at handling real-life material with his Oscar-nominated “No” and “Jackie.” The script comes from celebrated scribe Steven Knight (“Dirty Pretty Things,” “Eastern Promises,”) and unfolds over one weekend in the early 1990s, when Diana decided her marriage to Prince Charles wasn’t working, a short timeline that could give way to a deep character study. After news of the project broke this week, reaction was divided over whether Stewart could pull it off. Regardless, that instant buzz makes this a title that buyers won’t be able to resist checking out.

With an undeniable cast that includes Robert De Niro, Oscar Isaac, Donald Sutherland, Anne Hathaway, and Cate Blanchett, James Gray’s follow-up to last year’s “Ad Astra” is among the most promising commercial prospects up for grabs at the market. Buzz around “Armageddon Time” started before Gray’s Brad Pitt-starrer was even released. Gray penned the script based on his childhood memories, exploring friendship and loyalty against the backdrop of Ronald Regan’s impending presidency.

For her second feature, Crystal Bear-winning Chinese-New Zealand director Roseanne Liang combines action, horror, and historical drama for “Shadow in the Cloud,” which she co-wrote with disgraced screenwriter Max Landis. Chloë Grace Moretz stars in the World War II-set film, now in post-production, which centers around an Allied all-male crew confronted by a female officer who boards their plane carrying a suspicious package. Strange happenings and holes in her backstory lead to paranoia surrounding her true mission, while an evil presence lurks aboard the flight. Feminist themes, genere elements, and Moretz’ acting chops could bring the film to the top of many buyers’ lists.

In “Run Rabbit Run,” Elisabeth Moss is set to team up once again with director Daina Reid, who directed Moss in four episodes of “The Handmaid’s Tale.” The Australian thriller is a modern-day ghost story penned by novelist Hannah Kent that follows a fertility doctor forced to make sense of the increasingly strange behavior of her young daughter. It could prove to be a promising follow-up to Moss’ latest genre effort, “The Invisible Man,” which grossed $123.25 million.

“Training Day” director Antoine Fuqua is set to direct Will Smith in “Emancipation,” which follows Peter on his escape from enslavement on a southern plantation and his journey north, where he joins the Union army. The film, scripted by Willam N. Collage, is based on a true story and inspired by an image of Peter’s scars from being whipped on the plantation. The package would be hot given the talent attached and is made even more desirable given the current reckoning over police brutality and systemic racism in the US. Production is slated to begin early next year.

François Ozon’s coming-of-age film centers around a 16-year-old boy living in Normandy over one summer and is among the Cannes official selections with rights available. A teaser released Wednesday is set to The Cure’s “In Between Days” and true to form, suggests characters’ exploration of their sexualities will play a big part in the film. “Eté 85” is set to be released in France on July 14. International buyers will be interested in checking out the latest from this acclaimed French director; his recent films have been distributed in the US by Music Box Films and Cohen Media Group.

After directing Angelina Jolie ten years ago in “Salt,” Phillip Noyce is trying his hand at another female-led actioner, but this one is based on a true story. Lily James is set to star as a brash woman who takes to robbing banks to make ends meet in 1980s Texas while posing as a man.

Another official selection comes from Danish filmmaker Thomas Vinterberg. The film, co-written by Vinterberg and “A Hijacking” writer/director Tobias Lindholm and starring Mads Mikkelsen, follows a group of high school teachers who test the idea that their lives would be improved by constantly maintaining a level of low-grade drunkenness. A hilarious premise combined with Vinterberg’s track record should be attractive to buyers, his 2012 “The Hunt” was nominated for Best Foreign Language Film at the Oscars.

After earning his long overdue first Oscar nomination for “First Reformed,” Paul Schrader’s latest effort stars Oscar Isaac as a gambler and former soldier who sets out to help a young man seek revenge on a mutual enemy from their past. With a cast rounded out by Tiffany Haddish, Tye Sheridan, and Willem Dafoe and executive producer in Martin Scorsese, this film offers plenty of commercial potential. The film was forced to shut down production in March, with only five days left of shooting before wrapping; Schrader has said he expects to finish production in August.

Michael Mann is on board to direct this biopic on racing icon Enzo Ferrari, with a script written by Troy Kennedy Martin (“The Italian Job”) based on Brock Yates’ book “Enzo Ferrari — The Man and the Machine.” Hugh Jackman is in talks to star as the titular character. The film focuses on summer 1957, when the forces in Ferrari’s life collide. The high level of talent on this project gives it obvious commercial potential.

Jasmine McGlade is set to direct Zoe Saldana as a hard-charging female fencer who faces her personal demons and childhood rivals as she vies for a spot on the US Olympic Fencing Team. McGlade, who also wrote the script, called on her own experiences as a champion fencer. That firsthand knowledge paired with the skill McGlade showed in creating a sense of intimacy in her debut feature, “Maria My Love,” could make “Fencer” a popular choice for buyers looking for an intimate, inspiring, female-driven story.

Mon Jun 22 , 2020
SILVER SPRING, Md. (AP) — An internet registrar is threatening to delist a website that is a leading promoter of white nationalist and anti-immigration views, a move that could make the site accessible only to diehard users willing to use a special browser to find it on the dark web. […] 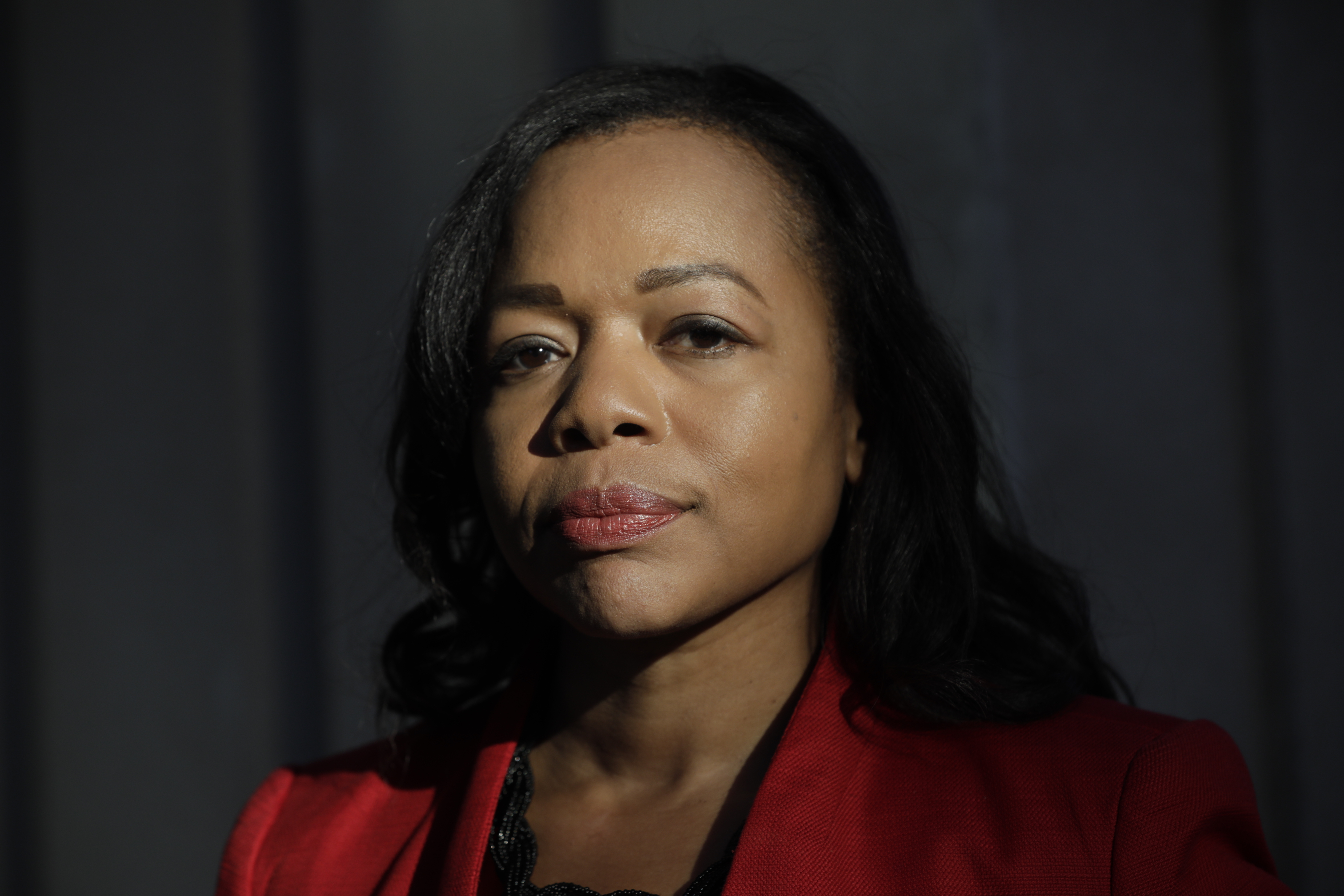